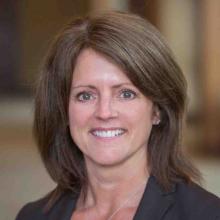 Jennifer Coyle is the former Dean of the Pacific University College of Optometry.  Dr. Coyle, a graduate of Pacific University, completed a residency in contact lenses at that same institution and a Master's of Science in Clinical Optometry.   She team-taught the contact lens didactic, laboratory and clinical curriculum for 14 years at Pacific University.  During that time, Dr. Coyle was also in a private group practice in Beaverton, Oregon, specializing in contact lenses.  She is a contributing editor for Primary Care Optometry News, a Fellow in the American Academy of Optometry and a Diplomate in the Section on Cornea and Contact Lenses.  Dr. Coyle is also a Diplomate of the American Board of Optometry, was named one of Vision Monday’s 50 Most Influential Women in Optical in 2006, and received the 2010 Clarence G. Carkner Oregon Optometrist of the Year award.  In 2018, she received a Theia Award of Excellence in Education from Women in Optometry. She lectures frequently at national and international meetings on cornea and contact lenses, and has authored many publications and book chapters on those topics.

Dr. Coyle is committed to the advancement of the profession of optometry, and served as the first woman President of the Association of Schools and Colleges of Optometry (ASCO) for two terms (2013-2015), and for five years was the Chair of the Oregon Optometric Physicians Association Advocacy Committee.  She currently serves on the Board of Directors of the American Academy of Optometry (AAO), chairs the ASCO Government Affairs Committee, and serves on the board of Women in Optometry.  She is also Past-Chair of the Association of Contact Lens Educators.

What does she enjoy most about teaching at the College of Optometry?

"I truly appreciate the opportunity to get to know such a special group of people. Our students are bright, down-to-earth, creative, caring and incredibly motivated to be the best optometric physicians possible. Graduation is one of my favorite days of the year because it is an honor to watch them officially become my colleagues in the profession, and forever a member of the family of Pacific University and the College of Optometry."