As a medical anthropologist, I study how people make illness, health and disease meaningful. I also study the relationship between structural inequalities and health. Specifically, I study how Samoan people in independent Samoa understand rapid epidemiological change, including rising metabolic disorders such as type II diabetes, hypertension, and obesity. In my research, I trace the intersections of the medicalization of food, fat, and fitness and Christian notions of health and well-being. I explore how medicalized notions of food, fat, and fitness travel into everyday evangelical religious life and also the ways those Christian notions of health and well-being travel into clinical settings. My research interests include medicalization, Christianity and health, well-being, food, metabolic disorders, and fat studies. To learn more about Professor Hardin please visit her website or her academia.edu profile.

Why did I become an anthropologist?

I studied history as an undergraduate and particularly focused on medieval studies and Central American political history. These seem like quite disparate areas of study, but for me the appeal was, in part, the charismatic professors who taught history like “talk story.” I was enthralled by the stories of political rivalries and religious change in both areas of historical study.

When I graduated, I knew I wanted to continue my studies through in-depth engagement around issues of power and inequality. However, it was only after I moved to New Zealand and worked as an agricultural laborer and tasting room staffer in the wine industry that I found anthropology. I decided to visit American Samoa, Samoa, Tonga, Fiji, and Niue. During my travels I was puzzled and tantalized by the food culture: a mixture of fast foods, starches, rice, pork, and Polynesian styled Chinese food. I was also interested the relationship between global inequalities, rising diabetes, and shifting food culture.

I realized I wanted to continue my studies not in the archive but by living in a place for a long time, talking to people, learning the language, and, as anthropologists like to say, systematically “hanging out.” Anthropology provided me a way to examine pressing social and cultural problems by making the familiar strange, and the strange familiar.

If you are a student, you can make an appointment with her here.

Forthcoming. Hardin, Jessica. “‘God is Your Health’: Healing Metabolic Disorders in Samoa.” In The Way to Renewal: Christianity, Conflict, and Transcendence in Australia and the Pacific, edited Carolyn Schwarz and Fiona Magowan, 98-126. Leiden: Brill.

2013 Hardin, Jessica. "Fasting for Health, Fasting for God: Samoan Evangelical Christian Responses to Obesity and Chronic Disease." In Reconstructing Obesity: The Meaning of Measures and the Measure of Meanings, edited by Megan McCullough and Jessica Hardin, 107-130. New York: Berghahn Books.

2014 “Embedded Narratives and Embodied Metaphors: Stress, Unforgiveness in the Mind, and Heaviness in the Heart.” Yale Ethnography and Social Theory Colloquium Series. December 4.

2012 “Faith and Health: Perspectives on Non-Communicable Diseases in Samoa.” Ministry of Health, Samoa. May 15.

2015 “Discerning the Sick Body: Embodied Evidence and Critical Christianity in Samoa.” Society for the Anthropology of Religion, San Diego, April 16-19.

2014 “Critique and the (un)Productivity of Wealth: Gift-giving, Tithing, and Christian Debate in Samoa.” Society for Cultural Anthropology, Detroit. May 9-10. 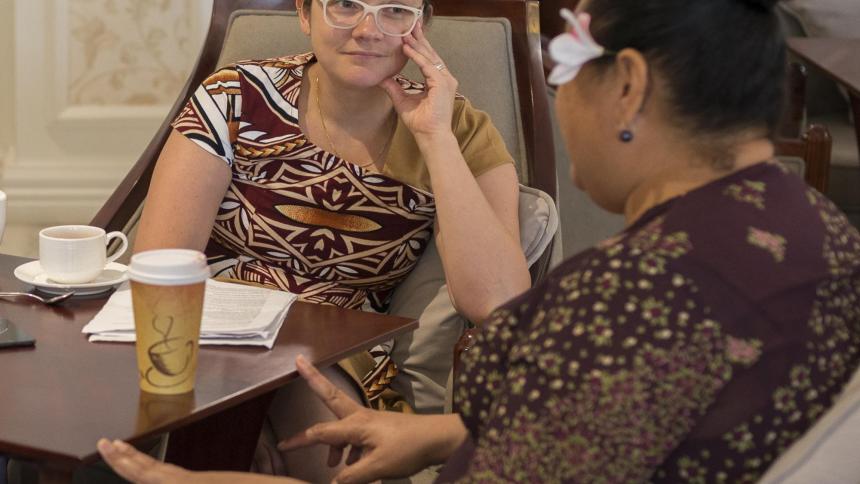 Pacific University Anthropology Assistant Professor Jessica Hardin is among a select group of scholars to have recently received a prestigious Graves Award in the Humanities.

Held April 28, the CCE's annual Community Collaboration Celebration honored the contributions of students, faculty, staff and local partners over the past year.