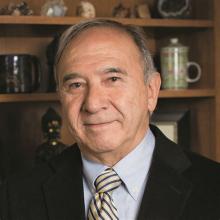 I am a professor of social work education with over forty years of teaching and administrative experience in higher education. My research has broadly focused on cultural mental health. I have specialized in gerontology and social policy. I am cited in the social work literature as initiating the concept of cultural competence which has guided much of my research and advocacy work. Western Research Associates is my consulting firm specializing in social research and program development. Most recently I served two terms in the Oregon State Legislature House of Representatives. Social justice is my passion.

I live in Hillsboro with my wife Sheila, her cat Potato, and my dog Maya. My daughter Amelia is a funeral director in the bay area. Maya and I love anything that takes us outdoors, snowshoeing, kayaking, camping, hiking, backpacking, as well as road trips and horseback riding (well Maya not so much the last one.)

Why I study social work

Social work has allowed me to live an actualize life of doing what I believe.  In the words of George Eliot “What do we live for, if not to make life less difficult for each other?”  Or, as I conclude, “Why are we here if not to leave the world a little better place than when we came.”  Further, social work has allowed me learn how to focus my knowledge, skills, and values on social justice work.

What I would tell a student considering social work

Instructor’s Manual:  Human Behavior and the Social Environment. Textbook published by McGraw-Hill Publishers.  Textbook is part of a series of books targeted toward social work core curriculum for undergraduate and graduate programs. 2005.

“Hispanic Initiative:  Models for institutional change with case examples,” Paper to be presented at the annual meeting of NASW, Idaho chapter, Boise, ID. 2003

“Conversando en familia: Comparison of intra-family violence in families immigrating from Morelia and Oaxaca, Mexico to Portland, OR,” NASW State Conference, November 2000; and 2nd Annual Power in Partnership Conference, October, 2000, both in Portland, OR.

2004                Nominated for election to the Nominations Committee of the National Board of Directors for the Council on Social Work Education.