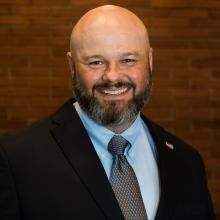 Dr. Hamilton has earned his BS in Accounting from Emporia State University and his MBA, Master in Arts of Public Administration, and a Ph.D. in Business Administration from Syracuse University. Dr. Hamilton is a CPA certified in the State of Kansas. Recently, he retired from 23 years of active military service as a Lieutenant Colonel.

Dr. Hamilton is a native Kansan. After earning his BS in Accounting from Emporia State University as a Distinguished Military Graduate in 1995, he received a Regular Army commission as a Second Lieutenant in the Corps of Engineers. In 2004, he changed career fields and began serving as an Army Comptroller and in 2011 transferred into the newly established Financial Management branch.

Before joining Pacific, Dr. Hamilton was an assistant professor of accounting and finance at the United States Military Academy, West Point, where he served for six years, three of which as the Director of Academy Advancement. His primary research interests include earnings management, financial restatements and corporate governance with his dissertation focusing on the relationship between corporate governance and length of time between financial misstatements, detection, disclosure, and restatement.