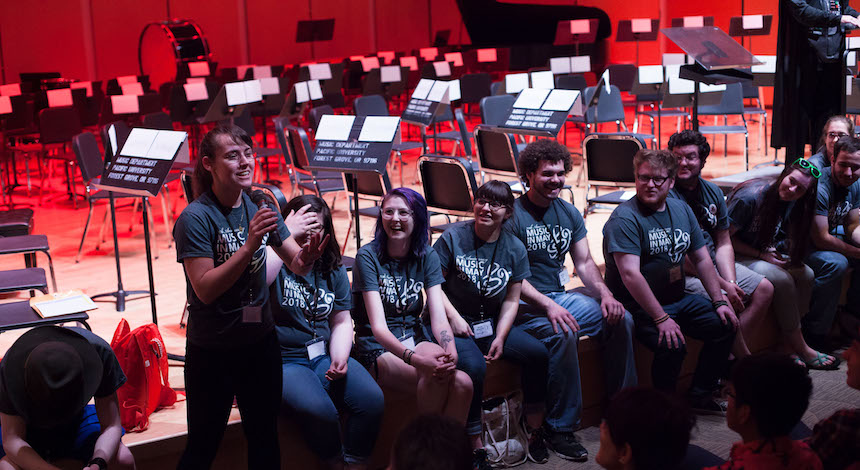 Pacific University's Music in May festival, celebrating its 71st anniversary as the only college-sponsored high school music festival in the Northwest, will host 400 student musicians at the university's Forest Grove Campus May 23-25 for three days of rehearsals and lessons.

The students will perform a grand finale concert on Saturday, May 25, 3 p.m., in the Stoller Center gymnasium on the north side of campus.

Student musicians from communities throughout Oregon, Washington, and Idaho are participating in the annual event, sponsored by the Pacific Music Department. Students stay in residence halls with school chaperones for the three-day festival and conclude the weekend with a concert featuring orchestra, choir and band.

Music in May began in 1948 by former Pacific University music education professor Richard Greenfield to assist high school string instrumentalists. The festival expanded to include band and choir, and is now considered the oldest event of its kind in the Pacific Northwest. High school band, choir, and orchestra students are selected to participate based on their school music ensemble director’s recommendation and the instrumentation needs of the Music in May ensembles. Twenty-two Pacific University students will serve as mentors to the high school students during the festival.

Three distinguished guest conductors have selected challenging literature for their ensembles to perform in the finale concert. Dr. James Mick from Ithaca College will conduct the orchestra. Gary Kent Walth, Professor Emeritus from the University of Wisconsin-La Crosse will serve as the conductor of the choir. Conducting the band will be Dr. Mark J. Walker, Director of Bands from Troy University.

Admission to the grand finale concert is $8 for adults and $6 for students and senior citizens. Tickets can be purchased at the door or in advance by contacting the Music in May office at 503-352-2198.