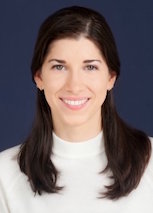 Farwood was among four finalists for the Wyatt Starnes Battle of the Schools Award, which honors the region’s up-and-coming young entrepreneurs. OEN asked colleges and universities across Oregon to nominate the most promising young entrepreneur, age 18-30, associated with their institution.

As a graduate student within Pacific’s School of Graduate Psychology, Farwood created the online video game Happymart while she was also a fellow within the university’s Berglund Center, an entity that supports multidisciplinary creativity, scholarship, entrepreneurship and the development of leadership skills through the incubation of ideas, products and services.

Farwood’s game was part of a research project while she pursued her clinical psychology doctorate at Pacific that examined the efficacy of a video game as a tool to increase understanding and empathy towards people with depression.

Happymart is for anyone who would like to know more about depression, especially individuals with depression and their families and close friends. Players take on the role of a depressed person trying to go to the grocery store. The experience is expressed through art, game mechanics and monsters that represent the player’s symptoms.

Happymart illustrates common struggles associated with depression, like being unable to get up in the morning, feeling overwhelmed by small tasks and struggling to relate to loved ones. The game is free to play and available at happymartgame.com.

"Although the theme is heavy, the tone of the game is hopeful," Farwood said. “Happymart is intended to start conversations about mental health within families and friend groups and raise awareness about mental illness. Additionally, this game models coping methods to help alleviate depression symptoms, and constructive ways for family and friends to give emotional support."

Pacific College of Business dean Jim Goodrich and Berglund Center director Andy Soria were among those on hand to support Farwood at the awards dinner. Farwood earned her clinical doctorate degree in psychology from Pacific last spring and is currently a staff psychologist at the University of Illinois at Urbana-Champaign.

The Berglund Center is funded by an endowment from Pacific University alumni Drs. Mary and James Berglund of La Jolla, California. The center annually holds an Inspired Ideas Competition open to all Pacific University students to compete for fellowships, awards and practical experience unique to launching a new start-up endeavor with the support and mentorship of experts in a safe academic environment.

The OEN Tom Holce Entrepreneurial Awards are named after Pacific University alumnus Tom Holce '58, Hon. '03. Holce was an entrepreneur and angel investor who built or helped to build dozens of successful Southwest Washington and Oregon businesses. The holder of more than 20 U.S. patents, Holce chaired Pacific's Board of Trustees for a number of years, and became the first winner of OEN’s Lifetime Achievement Award. He was named Philanthropist of the year 2000, and Pacific's tennis facility on its Forest Grove Campus is named after him.