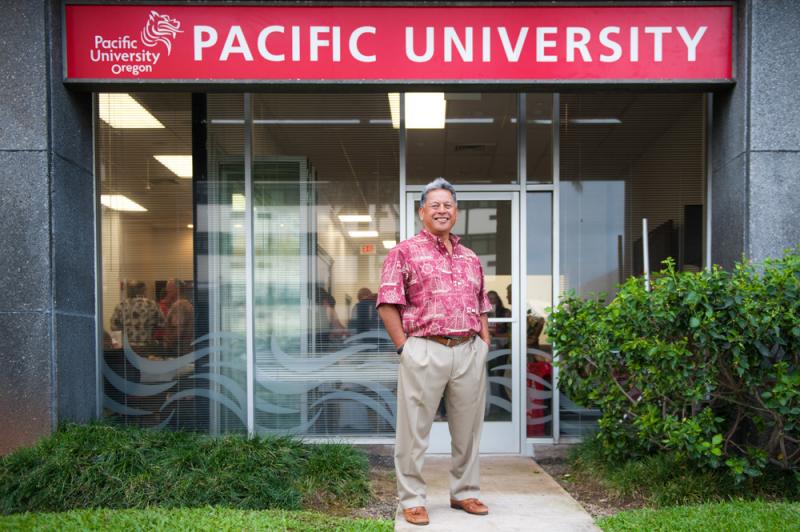 When Gary Pacarro ’74 started school at Pacific University in 1970, he was the first in his family to leave the Hawaiian Islands to attend college.

He was one of just two students from the Punahou School in Honolulu (also the alma mater of President Barack Obama) to come to Pacific University that year.

When he arrived, though, he found a collection of classmates from all over his home state.

“Coming from a school in Oahu, it was fun to connect with kids from all over the state,” he said. The rivalries from their K-12 schools were gone, and their camaraderie as students from Hawai‘i was just beginning.

“Once they got to Pacific, they were all Boxers,” he said.

Being part of the Boxer Nation is still Pacarro’s life. In January, he took on the position of founding director of the university’s new Hawai‘i Office, located in Honolulu. The new office is dedicated to maintaining a closer connection between the university and the state that is home to hundreds of alumni and more than 300 of Pacific’s 1,700 undergraduates.

“We intend to be here for the long haul,” Pacarro said.

His role will include building relationships with schools and community colleges in Hawai‘i, aided in part by a new partnership agreement signed between Pacific and the community college system in Hawai‘i to help create a seamless pathway for students. He also will work to reconnect with alumni in the state and develop a network that will provide internship and employment opportunities in Hawai‘i for Pacific students and graduates. And, the office will serve as a resource center and connection point for Pacific University students and their parents.

Pacarro remembers his own days as a student at Pacific, where he attended for his freshman, junior and senior years, spending his sophomore year at a college in Hawai‘i.

He lived that first year in a quad on the top floor of Clark Hall with three other students from Hawai‘i. The quad had bunk beds on one side with a big study room in the middle.

He especially appreciated that one of his classmates from Sherwood, Ore., invited all four to his family’s home for Thanksgiving.

“That was special,” he said.

He also stayed at Pacific after graduation, taking classes and working as a graduate assistant coach for the baseball team.

Coaching remains one of Pacarro’s passions, and he long has been associated with the Positive Coaching Alliance, a nonprofit organization dedicated to making youth sports a more positive experience. He served as the Hawai‘i state coordinator until recently and continues to lead seminars.

Pacarro also has coached baseball, basketball and football from peewee to the high school level. He currently coaches the Division II varsity basketball team at Punahou, where he has been a consistent winning coach.

“It’s not about the wins, but the maturation process and the experience of the student athletes,” he said. “This is what keeps me coming back each year.”

That, and the opportunity to make a difference in a child’s life.

Pacarro’s philosophy mimics that of the Positive Coaching Alliance: “What we’re doing is changing lives, using sports as a metaphor for life.”

Pacarro also has been involved in the travel, education and financial industries.

When his children, Kahi and Noel, were in elementary school, Pacarro became a student himself, earning a degree in education from Chaminade University and becoming a fourth-grade teacher at Punahou, his alma mater.

Later, as his children attended mainland colleges, he joined his wife, Gwen, as an advisor at Morgan Stanley, where they worked together for eight years. (Today, daughter Noel Pacarro Brown MAT ’05, is a partner with Gwen.

Pacarro said he has been “in training” for the job as founding director of the Hawai‘i Office for his entire career. The last four years were especially important, he said, as he reconnected with Pacific University as a member of the Board of Trustees. He and his wife realized the impact Pacific had on their lives and decided to fund an endowed scholarship for students from Hawai‘i.

“Pacific continues to be a big part of my life. I am thankful I was afforded the opportunity to attend Pacific,” he said. “In retrospect, it shaped the direction and purpose of my life.”