Alumnus Gets Creative with Camaros and Corvettes

Many people don't get the opportunity to have a hands-on relationship with their true passion. For Jim Pickering '04, his true passion has always been about cars; even as a creative writing major with a focus in poetry at Pacific University.

From Forest Grove to fast cars

Throughout his undergraduate tenure at Pacific, Pickering worked in Portland as a mechanic which enabled a greater appreciation for his material and an automotive-themed senior thesis.

Upon leaving Pacific, Pickering infused his life with fixing cars and writing on the side before being hired as an editor to Sports Car Magazine.

Based out of Portland, Ore., the monthly publication SCM covers the classic car market through high-end auction sales from around the globe. Pickering assigns reporters to cover classic car auctions in the United States, U.K., Australia, France and Canada before editing the reports for print.

After two years he was promoted to managing editor of SCM and then given the helm of another niche car magazine, American Car Collector. Covering only American cars, Pickering’s responsibilities include planning and mapping out every issue, as well as writing a bi-weekly blog to incorporate topics that weren’t able to fit into the magazine. Also, his staff blogs for eBay Motors to cover classic car listings as well as general classic car topics that appeal to the readership.

A turn to instant satisfaction

The immediacy of blogging eliminates the delay between press printing and mailing out to the consumer. Pickering said, “Instant feedback is a rarity for us, but that's just what our blogs give us.”

Many blog posts have turned into columns for the respectable magazines Pickering has worked for and still provides a resource for covering classic car topics that appeal to the readership.

“I enjoy the true individual history of the cars,” said Pickering who was one responsible for researching the facts and data behind cars. He added, “History adds value to a car. There are stories of rare race cars that were lost or hidden for decades, and when they pop up, the market goes crazy.”

Pickering described cars like the Auto Union Grand Prix racers, developed in Germany but lost to the Soviets in the war. They are among the few that have a great background and can fetch millions at car auctions. Pickering also gave the example of a Sebring-winning 1960 Corvette tanker, which was found, parked in a college dorm parking lot and whose driver was unaware he was driving a million-dollar car.

“This stuff is out there, and because of what I do, I get to hear about it all the time,” said Pickering.

With the technological advances in internet and search engines, many of the generic car questions hardly reach Pickering’s ears. He said, “You can Google how many ’65 Mustangs were built and have the answer in about three seconds.”

But he mentioned the harder to answer questions, such as the value of a Corvette, Camaro or 300SL Gullwing have become more frequent and straightforward to answer because of his line of work. Even with access to searchable documents and information, people still will have misconceptions about the cars they drive or want to drive.

The production of a new Prius or F150 truck isn’t a clean manufacturing job which shouldn’t skew ones view of an already built finely tuned older vehicle. “Call it maximizing resources, or recycling, or whatever you want. I just like driving a classic when I need to haul stuff,” joked Pickering.

Cars have a cross-generational appeal. “I can't take my ’72 Chevy 4x4 project truck anywhere without people waving and commenting about how much they like it, even in its half-finished state. Old trucks speak to everyone in one way or another. Either you had one, or your dad did, or your grandfather did out on the farm. People love to escape from daily life and jump back into that place they remember, even if only for a few seconds,” recalled Pickering.

Pickering also feels we are about to experience a technological shift in terms of automotive functions and capabilities. Pickering states we have many cars with technological features such as lane departure warning, bird’s eye view, and automatic parking. However, in five years from now Pickering predicts that many cars will be adapted to driving by itself with its inhabitants relaxing through stop and go traffic.

But until then, Pickering will forever be searching for his favorite Chevy, a ’70 Chevelle SS 454 LS6. He concluded, “It's the ultimate muscle car for a Chevy guy like me.” 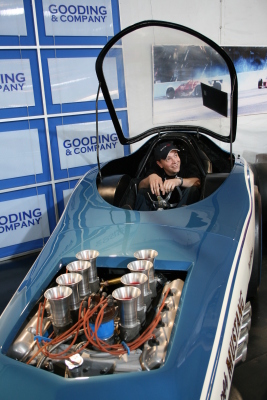