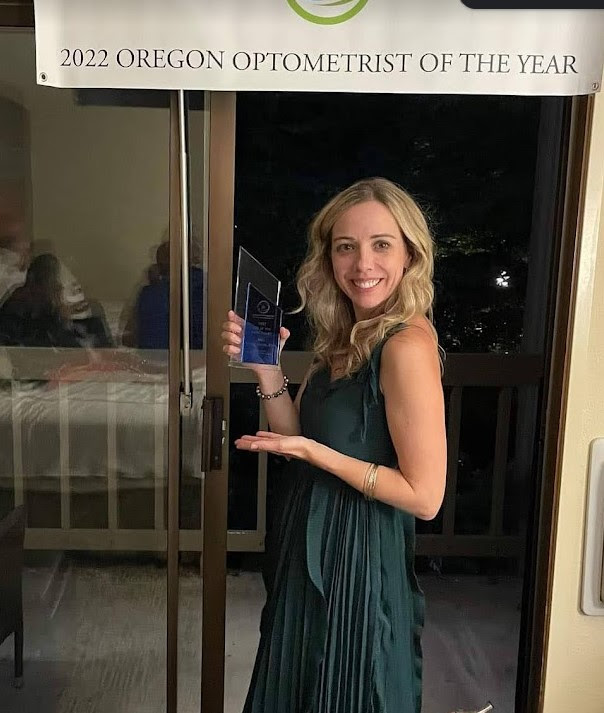 It was a school reunion of sorts at the annual meeting of the Oregon Optometric Physicians Association as no fewer than 15 Pacific University alumni, faculty members or current students were honored or elected to the group’s board of directors in July 2022.

Those elected to the 2022-23 board include Deri Sandberg OD ’07, president-elect; Nicole Rush OD ’01, immediate past president; David Wolf '81, ’83, OD '83, senior past president; and Craig Bowen '83, OD '86, secretary-treasurer. Also elected to the organization’s board were Sullivan  and William Hefner OD '96, MED '97, an associate professor at Pacific.

The OOPA’s Student Award was given to Luke Boran OD ’23, and the top Optometric Assistant Award went to Voss.

“It is so wonderful to see the representation of Pacific University alumni, faculty, and students at Oregon's meeting and within the leadership,” said Fraser Horn '00, OD '04, dean of Pacific’s College of Optometry, who noted that the current president of the American Optometric Association, the national group, is Jim DeVleming OD '90.

“It goes to show the strong relationship between Pacific University College of Optometry and the state associations throughout the Northwest and other states. It also fills our mission where we educate our students to be amazing clinicians and leaders.”

The OOPA also awarded certificates to members who graduated from its leadership program, which aims to develop leaders in the optometric industry. Among the graduates were Glabe; Boran; Sullivan; Larry Buchholtz OD ’18; Mari Fujimoto OD '19, who is an assistant professor at Pacific; Morgan Grove OD ’16; and Rachel Martel '17, MED '19, OD '20.