By
By Wanda Laukkanen

Mark Bailey, professor of education, was honored May 8 with the Distinguished University Professor Award for his exceptional and sustained record of performance over his 18-year career with Pacific University.

Bailey’s many accomplishments include the development of the Child Learning and Development Center on the Forest Grove Campus, which he founded and for which he serves as director and coordinator of pedagogy and research. The center includes the Early Learning Community, a preschool and kindergarten, as well as Zane’s Playroom, an early-childhood exploration center for children ages 3 and under.

Over the course of his career at Pacific University, Bailey has taken many leadership positions in redesigning the College of Education’s teacher education programs, said Chris Wilkes, vice provost for research and emcee of Pacific’s annual Faculty and Staff Awards ceremony.

Bailey is a distinguished scholar who has authored many peer-reviewed articles, books and chapters “that represent intellectual work of the highest level,” Wilkes said.

In addition, Bailey holds leadership positions in the National Association for the Education of Young Children, has served as investigator for multiple high-level U.S. Department of Education grants and is currently chair of the university’s Faculty Senate.

Also at the ceremony, Shesna Calkins, student services manager for the School of Communication Sciences and Disorders, received the Outstanding Contribution to the University Award, given to a person who promotes and exemplifies the values of Pacific University.

Much of the success of the new CSD program is due to “Shesna’s consistency, availability and commitment,” Wilkes said. Calkins is the first point of contact at the CSD office and is a role model in using technology, he said.

Other recognitions at the Faculty and Staff Awards on May 8 included:

The Carson family, who have been instrumental in sewing costumes for many years for Lu‘au

Betty Schmidlin, administrative assistant to the vice president of finance and administration

Karren Timmermans, assistant professor of education at the Eugene campus

Rita Barton, coordinator for advanced experiential education for the School of Pharmacy

Jesse Everett, learning manager for the College of Education in Eugene

Cat Marlow, coordinator for academic services and assessment for the School of Pharmacy

Story-Dondero Award for the Study of Politics and the Economy

Betty Schmidlin, administrative assistant to the vice president of finance and administration 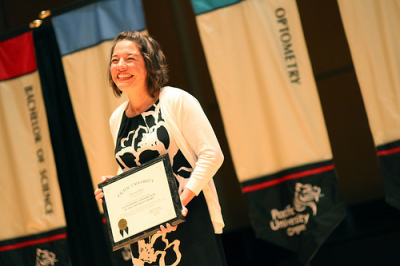