You might think that Eva Guggemos used to have the ideal job for someone interested in history. She spent eight years at Yale University, employed full time in the rare books and manuscripts section at its library — a section that she noted has more than 80 full-time employees and “miles and miles” of archives.

Now, however, Guggemos is the archivist, special collections and instructional services librarian at Pacific University, the full-time employee in the archives at the Pacific Library Archives. She works closely with three student workers, a library school intern and Lindsay Prescott Zaborowski ’07, a librarian and project manager for a joint program with Washington County working to create a digital library of historic photographs.

The Pacific Library Archives are small compared to Yale’s — occupying about three small rooms on the library’s second floor — but Guggemos said she enjoys the difference.

“I’m really enjoying being in a place that’s small enough that I really can know the faculty,” she said. “I’ve met the president quite a few times, and she’s really open and available. That’s the sort of thing that at a large university, you just don’t get.

“Pacific is just a really personal place, and the people are really friendly.”

Guggemos originally wanted to be a history professor after graduating with a double major in French and history from the University of Kansas. She enrolled at Yale in the Ph.D. program and found a job in Yale’s archives, transcribing testimonies of holocaust survivors.

“The archivist I worked with, the curator of that collection was just a great mentor who was doing some really interesting things, collecting the testimonies of these survivors, organizing conferences, arranging for the material to be available to researchers,” she said.

“All of those things, I started to realize, were the kinds of things I wanted to do.”

Guggemos also realized she missed doing web design, which she had done between undergraduate and graduate school.

“Being a librarian was a way to combine an interest in history and research with an interest in web design and the Internet, informational technology in general,” she said. “It was a good combo for me.”

Guggemos earned a master’s degree in history from Yale, but then left the Ph.D. program. She began work full time in the Yale rare book library and spent the next three years going to classes on Saturdays to obtain a master’s degree in library science from Simmons College.

Just before graduating from library school, she obtained a job as the reference librarian for Yale’s rare book library, a job that involved answering questions from people all over the world.

“I helped researchers find things, anything from ancient papyri to the papers of modernist authors, fine press books from the 21st century and everything in between,” she said. “I got a lot of exposure to a really wide breadth of types of material.”

But, she added, she missed her family on the West Coast (including several cousins in the Portland area) and the beauty of the Northwest. Being at Yale, she said, “was a really good job, but I was ready to not be in New Haven anymore.” She jumped at the chance to come to Pacific, replacing long-time librarian Alex Toth, who retired in 2011.

“What’s cool about this job is that the collection has been kept in really nice physical order, but basically almost untouched as far as being described online,” she said. “So, we really get to take the best practices and apply them from scratch.”

The Archives in June finished a National Historical Publications and Records Commission grant to describe 100 collections online on the Northwest Digital Archives website.

She also said she and her workers have been amazed at some of the items in Pacific’s possession. They include a very rare example of the first book printed in Oregon (made in 1839 for the Nez Perce) and copies of the first newspaper printed in Hawaii.

Also in the Archives are three handwritten letters that Guggemos believes are among the last words written by Marcus Whitman, a noted pioneer after whom Whitman College is named.

Just 20 days after writing the last letter, he, his wife and 12 other white people were killed; this event touched off the “Cayuse War” and contributed to the founding of Pacific, she noted.

Also among the top projects for the Archives is former Oregon Gov. Vic Atiyeh’s donation of his papers. Atiyeh formerly served on the Board of Trustees at Pacific and is a trustee emeritus. Guggemos said a grant-funded archivist will be working organizing Atiyeh’s collection this fall. 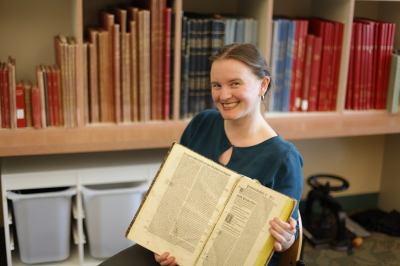