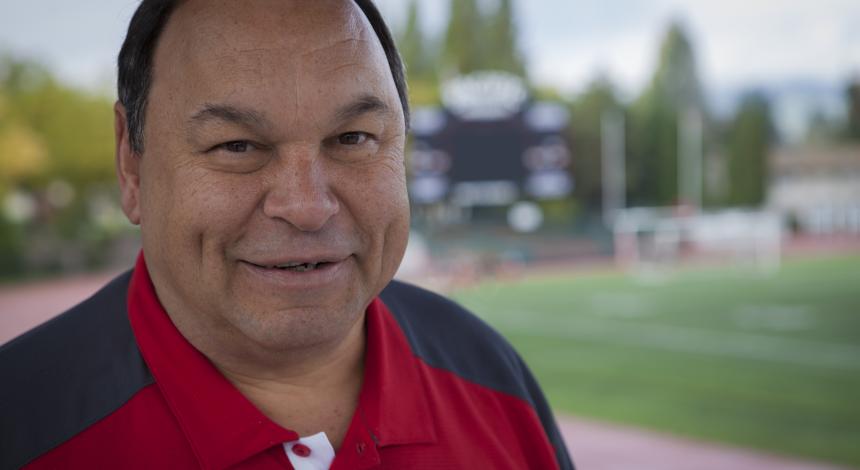 Warren Shaw has racked up some air miles.

A retired police officer from Hawai’i, Shaw has attended almost every Pacific University football game in the past four years, cheering on his son, Boxer quarterback Warner Shaw.

This season, Dad had a different idea.

“I said, ‘Why don’t I move up there?’ I did the calculations, and it came out a lot cheaper than flying every weekend.”

Shaw has been retired from the Hawai’i Police Department for 10 years and recently worked security at a hotel on the Big Island. His former manager used to let him use vacation to create long weekends for football season travel, but a new manager declined the request.

His wife, a first-grade teacher for the last 27 years, stayed at home on the Big Island, coming up for the last two games of the season. Shaw, meanwhile, rented an apartment and bought a small car in Forest Grove. For the past three months, he’s enjoyed getting to know the small town, visiting the Oregon Coast, and superstitiously parking on a No. 12 seat in Hanson Stadium to watch his son’s practices.

“It’s quite an experience,” Shaw said. “It’s a very safe community, a great place for kids to come.”

Shaw’s temporary move to the mainland isn’t commonplace, but it’s not unheard of, either.

About one in five incoming freshmen at Pacific are from Hawai‘i, many playing on the school’s 24 Division III varsity sports teams. Pacific’s football team boasts more players from Hawai‘i than any other collegiate football program in the country, other than the University of Hawai‘i, and five players on the Boxer roster this season are from the same small Big Island high school their quarterback attended.

Several team parents make the flight up frequently to support their students. That creates a tight community and unique culture, Shaw said.

“The thing I’m going to miss most is the parents. Everybody is really close,” he said.

The aloha spirit is a real thing, he said.

“I worked at a hotel, and sometimes the aloha spirit is not genuine; it’s just for visitors,” Shaw said. Pacific isn’t like that, he said. “It’s got to be real. From what I’ve experienced, Pacific has it.

“There’s enough of a Hawai'i presence or influence here that the aloha spirit rubs off on others. Even other parents and their young adult children from elsewhere have grasped the spirit of aloha, which comes from the heart.

"One has to live it, not just talk about it."

Shaw is quick to recommend Pacific to others, as well. He’s got a list of names from Warner’s high school to recommend, and he’s even spoken at Pacific events for prospective students on the Islands.

“I want to keep the connections going for Big Island student-athletes, an opportunity to participate in a successful program and acquire an education,” he said. "All that awaits them here at Pacific."

His son, Shaw said, has had an exquisite experience, playing sports and getting a first-class education studying business administration.

“Sometimes Hawai’i kids don’t go anywhere. Sometimes I think parents give up too early. They think it costs too much or their kids can’t be away from home. They settle for less,” Shaw said. “When they come here, from the little Big Island of Hawai’i, it’s great to see them continue their education.”