“We got involved with Pacific because they were interested in our lives," said Bob Iboshi ’64. “It was personal.” Iboshi was very connected at Pacific as a student and this helped fuel his dedication to the school after graduation.

Bob and his wife, Sunny Iboshi ’67 are committed and enthusiastic supporters of Pacific, but they weren’t always as engaged as they are now. Their reconnection started through the Phonathon, where Pacific students connect with alumni, parents and friends to invite support for the University.

Normally a Phonathon conversation lasts roughly five to 10 minutes, but with Bob it lasted more than an hour. Bob, who is originally from Oahu, Hawai‘i recognized the caller was also from Hawai‘i and decided he wanted to talk at length with the student. It was this phone call that reminded Bob of how personal Pacific is.

Bob was an active student — a football player, member of a fraternity and part of Hawai‘i Club. He met Sunny who was also very active in the Phi Lambda Omicron sorority and was a member of the student senate. The pair began dating while students as Pacific and were married in 1966 — they even had their wedding reception at Walter Hall.  It’s no surprise the university holds a special place in their hearts and over the past several years they’ve decided to become active members of the Pacific community once again.

It was this decision that led Bob and Sunny to start an endowed scholarship, along Kyle Kobashigawa '87, in memory of Henry Kaulia ’82, a good friend of the Iboshis who was killed in a car crash in 2006. They also host many guests from Hawai‘i in their home to “try to reconnect with Pacific,” said Bob.

Bob and Sunny are co-chairs of the Charles Trombley Society and are working to keep donor and alumni relations strong. According to the Iboshis, these relationships are the backbone of the university. Students depend on alumni contributions that support financial aid, which is a very important part of university life.

Over the years Pacific University has grown and changed and, according to Bob and Sunny, it has changed for the better. “We foresee Pacific is going in the right direction,” said Bob. “We see Pacific as a very top-notch university with the leadership we have.”

I think people who are not in the community here or who haven’t come back to visit would be absolutely amazed at the campus, at the buildings that are meeting the needs of students, said Sunny. They’re not keeping up; they’re ahead of the times.” 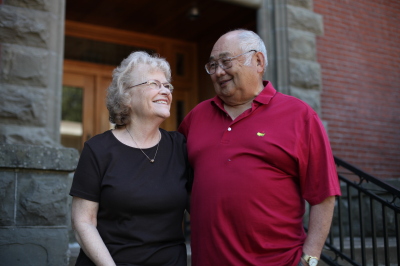