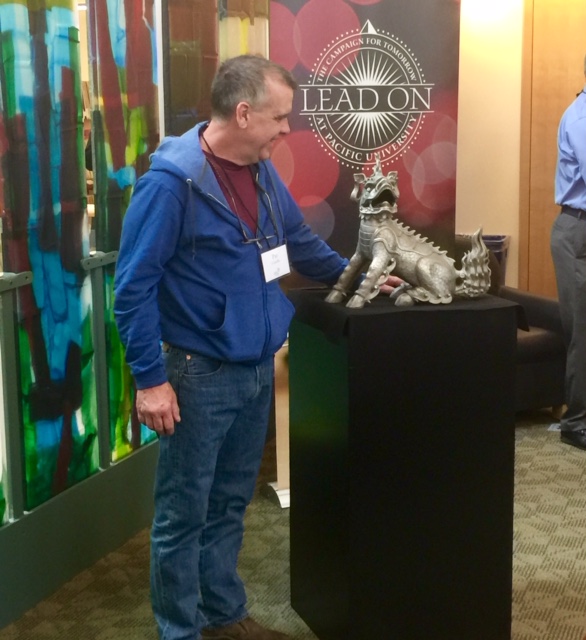 Pacific University President Dr. Lesley Hallick, artist-sculptor Pat Costello and many Pacific alumni on Friday presented the third incarnation of Boxer, the mythical qilin that has been the symbol and mascot of Pacific since 1968.

The 40-plus-pound bronze sculpture is derived from and inspired by Chinese mythology, which gave the animal the features of a stag, a dragon, a horse and a carp. The creature was first associated with Pacific in the late 19th century, when missionary J.E. Walker bought it in China, then gave it to his mother, who gave it to Pacific.

Over time, the statue inspired years of hijinks by students, who stole it, hid it, "flashed" it, and tossed it into scrums of fellow students, who sometimes wrestled for hours to win possession of it. The original Boxer was damaged and suffered various other indignities before it disappeared in 1969. Boxer II enjoyed an epic road trip across America before it disappeared around 2007.

This time, things will be different, administrators and alumni vow.

Boxer "must reside within the Pacific community and be respected and revered and a part of all we are," said Dan Hornberger '69 during a private unveiling on Homecoming weekend.

Costello's creation was roundly applauded when the drape was removed.

"Pat did an amazing job," said Bruce Bishop '68, who spearheaded the drive to raise money to commission the qilin. "This may look better than the original."