As a member of the President's Cabinet, McVeety will oversee the areas of university fundraising, marketing, communications, alumni relations and community relations. She will begin her appointment on June 1. 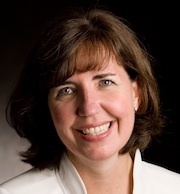 For the past three years, McVeety has led Mt. Hood Community College as its vice president for College Advancement and Foundation executive director.

"I am confident Cassie's extensive experience in leading institutional advancement efforts will greatly benefit Pacific during this time of unprecedented growth," Hallick said.

As the first individual to lead all advancement activities at MHCC, McVeety implemented an infrastructure that resulted in double-digit growth in fundraising revenue, better-engaged alumni and friends of the college and a strengthening of the MHCC brand.

Prior to her current post at MHCC, she served as Portland State University's Vice President for University Relations from 2004-09.

As a member of PSU's senior leadership team, McVeety worked with presidents Dan Bernstine and Wim Wiewel on a wide array of issues, including legislative advocacy, enrollment management, diversity and community engagement.

From 1992-2004, she oversaw campus advancement at Washington State University Vancouver. In that role, McVeety planned and led all advancement activities, including development, marketing & communications, alumni relations and community relations.

She worked closely with academic directors to align academic priorities with fundraising goals, resulting in 70 percent participation by faculty and staff in annual giving.

McVeety's commitment to civic engagement, a critical component of University Advancement and a pillar of this institution's mission, is truly unsurpassed.

She has served on numerous organization boards, ranging from business associations to non-profits, and is currently a member of the Gresham Area Chamber of Commerce and East Metro Economic Alliance.

Previous service includes the Portland Business Alliance and the Council for Advancement and Support of Education (CASE). McVeety and partner Allan Warman are also actively engaged in multiple charities here in the metropolitan area.

"Cassie's active community participation complements a breadth and depth of leadership experience I believe will immediately benefit this institution as we move forward," Hallick said.