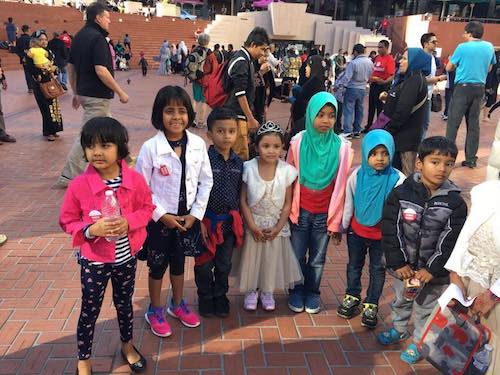 The Pacific University Center for Peace and Spirituality co-sponsored a downtown Portland rally over the weekend to draw attention to “the persecution of the Rohingya people in the Southeast Asian country of Myanmar, also known as Burma.”

Buddhist extremists in Burma are engaged in what the United Nations has called “ethnic cleansing” against the Rohingya, a Muslim minority group. Human rights groups have called the violence genocide.

Since August 25, Burmese security forces have been carrying out a campaign of ethnic cleansing against Rohingya Muslims in Rakhine State. Nearly half a million Rohingya have fled to neighboring Bangladesh to escape killings, arson, and other mass atrocities. The Rohingya, effectively denied citizenship under Burmese law, have faced decades of repression and discrimination. About 120,000 remain internally displaced from waves of violence in 2012 and 2016, in dire humanitarian conditions.

The Portland rally drew hundreds. Buddhists, Muslims, Jews, Hindus, and Christians were among those standing in solidarity with the Rohingya people and the nearly 100 Rohingya immigrants currently living in Portland.  Many of these immigrants have family still in Burma.

Seven-year-old Samira Abdul stepped onto the stage in pink tennis shoes and began with an Arabic greeting that means "peace be upon you" before she spoke about genocide.

The Burmese government, she said, is targeting her people. "If my parents were there and I was born there, then I would be dying like the other children," she told the crowd. "But since my parents are here and I am here too, that's why I'm safe in America."

Speakers decried the violence and demanded that the United Nations and the United States, along with the world community, do more to stop the violence.

“Genocide is not Buddhist. Genocide is not Jewish. Genocide is not Islamic. Genocide is not Christian. Genocide is not Hindu,” said Rev. Dr. Chuck Currie at the rally.  Dr. Currie is the university chaplain and director of the Center for Peace and Spirituality at Pacific University. “What is good and valuable about all our faiths is that we are called to be one people united…We have to support even stronger sanctions…We have a responsibility to protect those being persecuted against.”

Learn more about this issue: