When Lisa Rowley stepped down last year from her position as founding director of Pacific’s School of Dental Hygiene Studies (DHS), she was already considering how she would continue to support the program. For her, “it’s all about the students.” 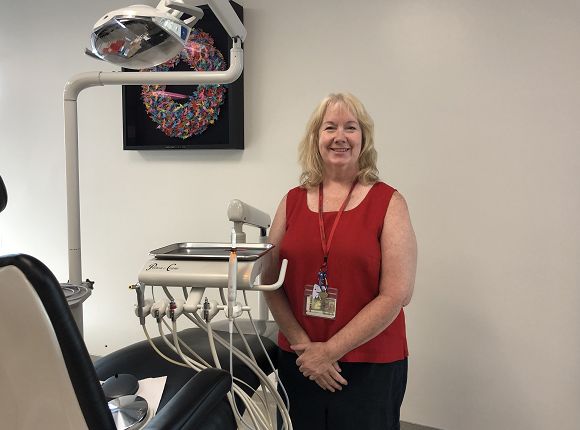 Rowley stepped down as director in the fall of 2018 after dealing with some health issues, but still works full time with the program, teaching courses and preparing for an upcoming accreditation visit.

During her years as director of the DHS program, Lisa was instrumental in creating and fundraising for the School of Dental Hygiene Studies Alumni & Friends Scholarship. Rowley started thinking about how she could grow that fund with a future gift and decided to make Pacific the beneficiary of her retirement account

“I’m not married, I don’t have children, I have no one else to leave the money to,” said Rowley, “so I’d like to do something a little more significant. I believe that the more you make, the more you should give back.”

Rowley is one of 10 Pacific University donors recently inducted into the President’s Circle, a giving society recognizing those who have given at least $100,000 to Pacific over their lifetimes.

In 2004, Rowley was recruited by Pacific to develop and later direct a new dental hygiene program within the College of Health Professions. Pacific hoped to create a program where students would be taught to practice independently, much like a nurse practitioner or physician assistant. The university’s vision for the program was “an unusual thing in dental hygiene” said Rowley.

“As soon as I heard that, I was all in,” Rowley said, “because it was something really special, and not something I had ever done before.”

Oregon offers an expanded practice permit that allows dental hygienists to practice without the supervision of a dentist, to provide care for underserved patients with limited access to oral health care.

With input from currently practicing hygienists, Rowley designed the program to graduate students who would immediately qualify for this permit. Students in the program take specific coursework to prepare them to practice independently. By the time they graduate, students also have 500 clinical hours providing care to underserved patients, so they can start practicing independently right away.

“A large number of our students go out and they don’t work in private dental offices,” Rowley said. “They’ll work in different healthcare systems. And some have gone out and started their own businesses; we have a couple that have vans that go around and provide dental hygiene care. So right out of the gate they’re going out and doing things like that, because they’re really well prepared for it.”

But all this preparedness comes with a large price tag, which Rowley admits.

“I come from a very low-income family,” Rowley said. “I went to community college because I could never have afforded to come to a school like Pacific. I never could have afforded to attend a private university, and I don’t want that to stand in the way of other people.”

Which is where the DHS Alumni & Friends Scholarship comes in.

According to Rowley, during the admission process each year, the program typically loses up to half of the top 10 students admitted because of the program’s high tuition.

She would like to see more students able to attend the program without coming out with such high levels of student debt. And she thinks the scholarship is one way to help reach that goal. “I don’t want money to ever be an obstacle to somebody reaching their dream,” she said.

When Rowley was originally fundraising to create the scholarship for the program, she named it the DHS Alumni & Friends Scholarship because she hoped that alumni would support the scholarship, and through that, future dental hygiene students.

She sees her gift as a challenge to other people — faculty, staff, alumni and friends of Pacific — that this is something they can also do, especially by setting up a planned gift through their estate.

“Whatever your estate is,” Rowley said, “as long as you’ve got your family taken care of, why not allocate some of that to the place that has been supporting you? I still donate to my community college because they gave me my start. That’s where the money came from; why not give some of that money back for the students?”

“I think people have the capacity to be more generous than they are, so I would like to encourage them to be as generous as they can be.”

If you have included Pacific in your estate plans, or have questions about how to do so, please contact Jan Stricklin, Associate Vice President for University Advancement, at jstricklin@pacificu.edu or 503-352-2890.