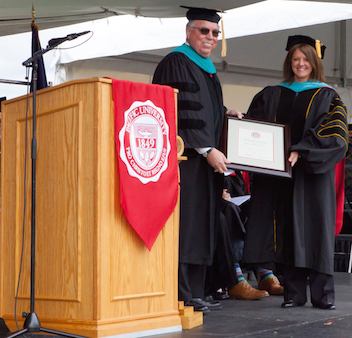 Pacific University alumnus and current Board of Trustees member Douglas R. (Doug) Weberling '72, OD '74 has been named the sixth recipient of the Kamelia Massih Prize for a Distinguished Optometrist. Dr. Weberling received the honor at Pacific University's professional programs commencement ceremony on May 21.

"I look at honorees who have received this award previously and I am humbled to be recognized as they have been," Weberling said. He added that the many successes Pacific alumni have experienced in the optometric professional on national scale is a testament to the college curriculum and university environment.

Weberling is the president of Dr. Weberling and Associates optometric practice in Bristol, Va, where he is a longtime resident and the city's former mayor. Additionally, Weberling has been a clinical investigator and spokesperson for Johnson & Johnson, Ciba Vision and Bausch & Lomb. He is an expert on sports vision issues, lecturing throughout the country, and having served as an optometrist for Team USA in both the 1994 Winter Olympics and the 1991 Pan American Games.

Weberling is a member of many professional organizations, including the American Optometric Association, Virginia Optometric Association and is a past president of the Lonesome Pine Optometric Society. Throughout his career, he has also served on numerous organizational boards, including the boards of the Bristol Regional Medical Center and the Bristol Industrial Bond Authority. Weberling has been a member of Pacific University's Board of Trustees since 2011.

He is recognized as a pillar in the communities he serves, having been named the United Way Volunteer of the Year in 1982, Bristol Distinguished Young Man of the Year in 1983 and as one of 10 Outstanding Young Virginians in 1984.

"As I stand here today, I think about my years as an undergraduate and graduate student here," Weberling told the graduates. "I never could have imagined how my life would be shaped by this university." He later challenged the graduates to remember their experiences at Pacific. "For it's the skills you have learned and knowledge you have gained that will contribute to your success."