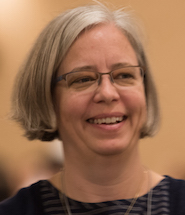 Pacific University College of Education dean Leif Gustavson has announced the appointment of Dr. Helen Sharp as director of the college's School of Communication Sciences and Disorders.

Sharp succeeds founding director Dr. Marty Fischer, who is retiring at the end of the academic year. Sharp begins her tenure on Aug. 15 and comes to Pacific from Western Michigan University, where she has been an associate professor of speech pathology and audiology since 2009. A licensed speech-language pathologist in Michigan who has previously been licensed in California, Illinois and Iowa, Sharp possesses more than 25 years of clinical practice.

Her professional service also includes numerous committee positions, including a stint on the National Institutes of Health’s Data Safety Monitoring Board (2001-06), and most recently, as chair of the American Cleft Palate-Craniofacial Association’s Policies and Procedures Task Force. Additionally, she served as the ACPCA president in 2014.

Sharp earned her master’s degree in speech-language pathology from the University of Pittsburgh and a doctorate in speech and hearing science from the University of Iowa, where she later taught as a faculty member. She has extensive teaching experience in the areas of ethics, counseling, cleft palate and undergraduate education, and is a prolific scholar, having authored numerous peer-reviewed articles, book chapters and commentaries. She has also presented extensively both domestically and internationally.

“Helen brings extensive experience in strategic planning, ethics, program development and assessment,” Gustavson said. “I can’t think of a better person to lead the school in its next phase of growth and success.”

Professor Peter Flipsen is serving as interim director of the School of Communication Sciences and Disorders during the transition period.