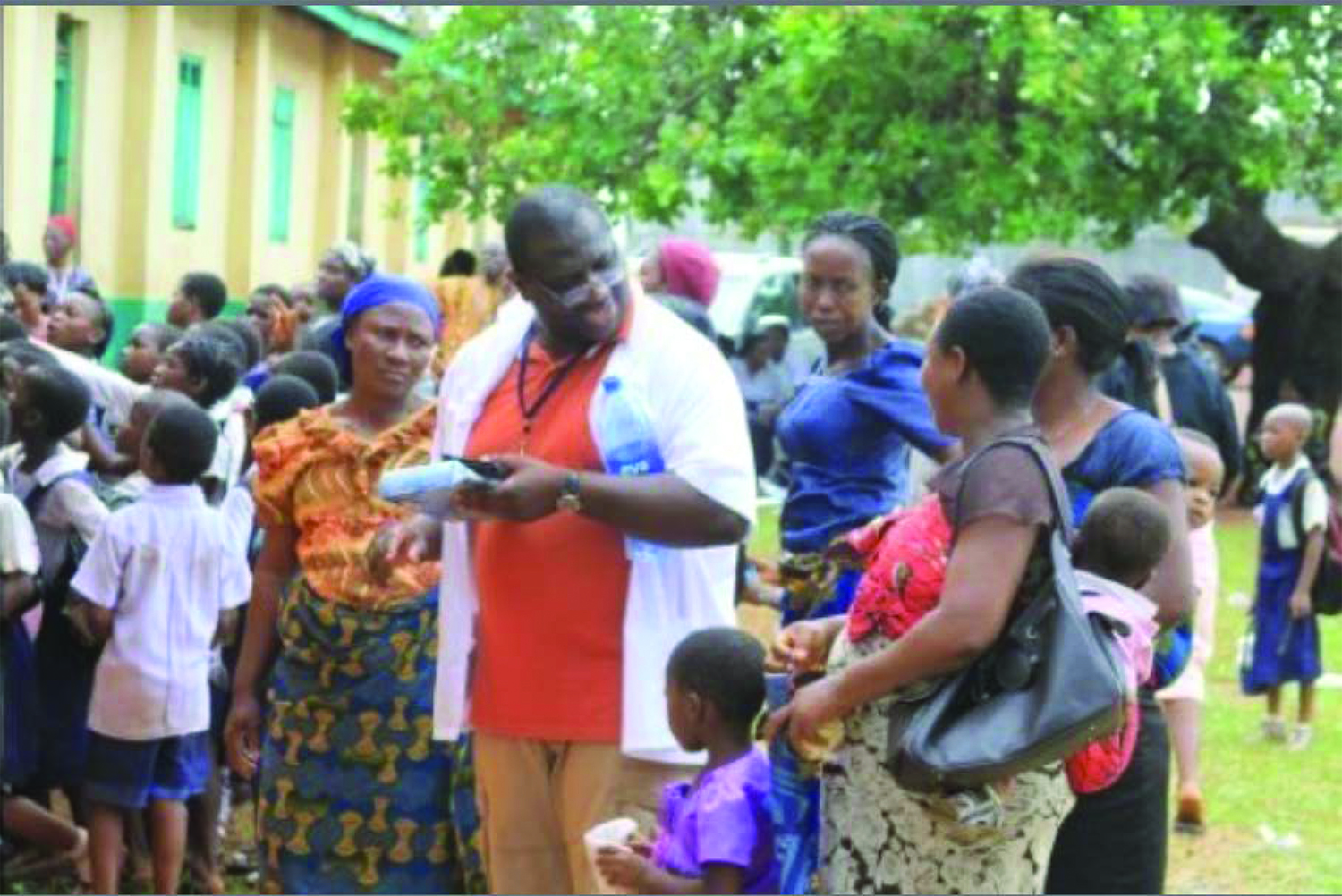 When Dr. Peter Agbo PharmD ’09 returns to his native Nigeria this winter, the trip will be different from his previous charity visits to Africa. This time, the charity he co-founded, in partnership with Nissis Vessels Foundation and Mecca USA, will deliver medical care and services to people traumatized by war, as well as those who lack basic care.

More than 20,000 people have fled to Nigeria from neighboring Cameroon, where “horrific violence” is ravaging the English-speaking part of the country, according to Amnesty International.

Agbo grew up in Nigeria and later earned his Doctor of Pharmacy degree (PharmD) from Pacific University. Later, he went on to earn a master’s degree in public health (MPH) from the University of West Florida and a doctorate in medicine (MD) from the American International School of Medicine Guyana. Today, he is employed by Bayhealth Medical Center, which serves central and southern Delaware.

Each year since 2011, he has taken two weeks to return to west Africa with his charity, Raphas Hands — named for a Biblical phrase that translates as “Healer’s Hands” — to deliver health care services and supplies to underserved people in and near his native Nigeria. Bayhealth and other organizations support by contributing supplies.

His passion for service has been an inspiration to his faculty and classmates back at Pacific, which is why the Pacific University Alumni Association is honoring him with the 2018 Emerging Leader Award.

“Dr. Agbo’s aspiration to expand his knowledge and being a mission-driven life-long learner is commendable,” said School of Pharmacy Dean Reza Karimi. “His dedication to advocate for underserved patients and improve patient care and public health … speaks volumes about his emerging leadership in the health care community.”

In December, Abgo and his childhood friend Dr. David Asuzu — now a Yale-educated neurosurgeon in residence in Maryland — will help lead a team of physicians and other medical personnel to provide free care to more than 1,000 people during a two-week visit to the city of Ikom, close to the border with Cameroon. They will conduct clinical evaluations, assess health conditions, educate patients on hygiene and disease, provide medications for patients with chronic illnesses, treat malaria cases and dispense vitamins. The team of physicians and surgeons will also perform minor surgeries for those who have been injured or haven’t been served by the local medical system.

“They have limited resources,” he said of the healthcare system in Nigeria. If a patient in rural part of the country wants to see a healthcare provider, the patient is usually asked to come in with a book to write in, a pen and a thermometer. And he must pay before being treated.

That’s why so many poor people in this part of sub-Sahara Africa don’t get regular medical attention. As a consequence, Agbo said, many have diabetes, high blood pressure or aren’t receiving routine care while pregnant. These are the people who benefit from the annual visits of the Raphas Hands team, which Agbo and Asuzu estimate has served more than 8,000 people in Africa.

A paper published in 2016 in the FASEB Journal, a peer-reviewed biology journal, said the Raphas Hands team and others recruited 35 volunteer health care providers, including physicians, dentists, nurses, surgeons, lab technicians, pharmacists and nutritionists, to treat 1,520 people in Cameroon, where health disparities are great between urban and rural areas. The paper said the patients commonly suffered from malnutrition, malaria, sexually transmitted diseases, respiratory tract infections, diabetes, for which they received treatment and education about the importance of a healthy diet, good hygiene, exercise and moderate alcohol intake. The medical mission “demonstrated the prevalence of preventable diseases … in rural communities in Cameroon.”

Agbo said “people celebrate” when the medical team arrives. One woman comes back every time the team returns to say thank you for removing her lipoma, an accumulation of fatty tissue. The same with a middle-aged man who was treated with alpha blockers for an enlarged prostate. And Agbo speaks warmly of a young boy whose undescended testes, a condition known as cryptorchidism, were brought down into a normal position, lowering his future risk of infertility and reducing a primary risk factor for testicular cancer. None of them would have received treatment on their own, he said.

“There are so many testimonies,” Agbo said. “You see these people smiling. It motivates you to do more.”

Asuzu describes Agbo as a dear friend whose “constant hard work, compassion and willingness to help out those in need are virtually unmatched.”

Agbo said he and Asuzu remain committed to the project to bring advanced healthcare to underserved people in the region where they grew up. The coming trip will bring new medical challenges and different kinds of patients, but, said Agbo, “I can’t wait to see them.”

“I have a big heart,” he said. “I want to make the world a better place. I am a product of kindness and am humbled at any opportunity to pay it forward.”

This story also appears in the Winter 2018 issue of Pacific magazine.