'The Education I Got Here Was Fantastic' 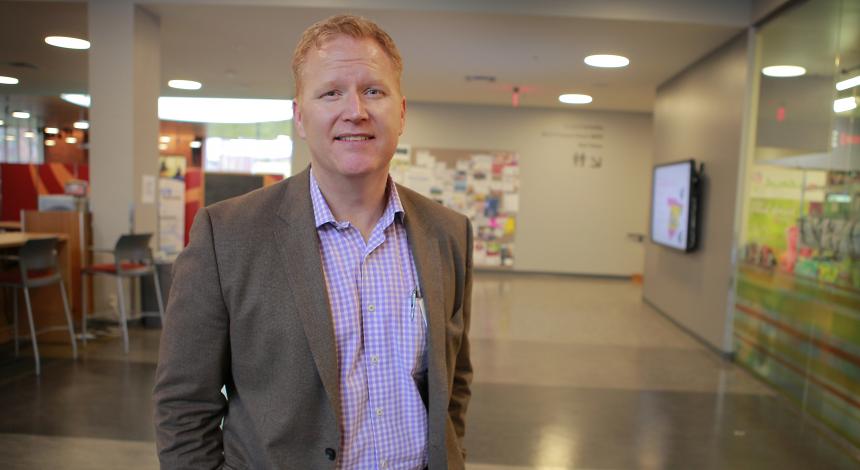 It might have been a coincidence that James Matteucci’s first philosophy class at Pacific University focused on the ethics of healthcare.

Or maybe it meant more.

Matteucci didn’t plan a healthcare career when he started college.

That first class, however, has come back to him countless times.

“It was really instrumental in what I ended up doing for a living,” he said.

Today, Matteucci ’94 is associate director for state government affairs and policy with Merck, Sharp & Dohme. Essentially, he represents the interests of the global pharmaceutical company in the Pacific Northwest, working with legislatures and community organizations in five states on issues of public policy around health, research and medicine.

He didn’t set out on his college journey with that — or any — career in mind, though. Raised in a military family, Matteucci was the first to go to college, and he enrolled at Pacific imagining what he calls a naively academic experience.

“I had this idea it was about studying and having tea with professors,” he said. “I didn’t see college as a job placement opportunity. I wanted to read and learn.”

That first philosophy course struck his interest, and he majored in philosophy and English. Philosophy, he says now, gets a reputation for being ephemeral. In reality, though, it has constant application to the complexities of life and decision-making.

After Pacific, Matteucci joined the Peace Corps — another dream he’d had for years — serving in Hungary for three years. He was assigned to teach English as a second language, but most of his students were advanced, so he delved into more subject matter, eventually developing an introductory economics curriculum.

“None of the teachers had taken an economics class,” he said. “It was their first exposure to ‘lemonade stand economics.’ That part of the culture just didn’t exist,” he said. “So we started with what is money and why use it and ended up with soft skills development like how to interview and how to create a resume.”

When he returned to the United States, he pursued a master’s degree in public administration at the University of Washington, where he met a vice president in hospital relations. That connection led to his first professional job — which led to the next and the next.

He’s spent the last 13 years lobbying for Merck, a job that takes him into everything from tax policy to public health. In Oregon, vaccine policy and end-of-life care have been prominent this year.

Healthcare, he said, comes down to a balance between price and access.

“Right or wrong, fair or unfair, that’s the world here,” he said. “It’s all about price and access and dialing those to a place where quality comes out.”

He contrasts the system to a recent experience in India, where he and a colleague were Richard T. Clark Fellows for Global Health, working on hospital and provide accreditation standards and public-private partnerships to improve care.

They ended up creating something like a mini-MBA curriculum to help explain the motivations that impact the private sector and how competition can force improvements in service and care.

His success, he said, started with the broad foundation he received at Pacific.

“Pacific taught me how to think, how to argue, in a way I’ve used in my own life and career. How to understand both sides of an argument and ultimately take a position, but not be naive to understanding other perspectives,” he said.

“The education I got here was fantastic.”