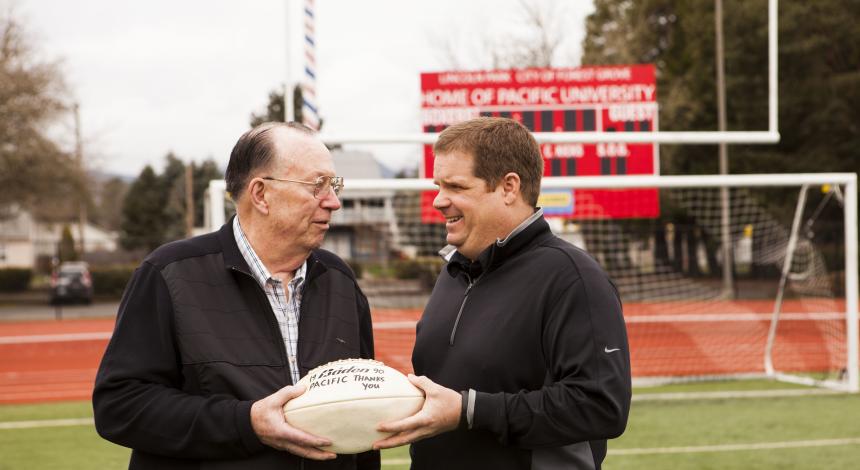 The clouds in the sky only make the smiles on the football field brighter.

It’s a Tuesday morning, and Bob Schurman, an old friend of the Pacific University football program, is making his first visit to Lincoln Park Stadium.

He is “absolutely in awe” of the sparkling new facilities, built in 2010, Schurman says again and again.

Schurman is a former bus driver for the Pacific University football team, working between 1989 and 1990. He returned to campus on Tuesday to present current Coach Keith Buckley with an invaluable donation: a football signed by one of the last Boxer football teams to play before the program shut down after the 1991 season. Boxer football took a 19-year hiatus before it was reinstated in 2010. Four years later, the new team just completed a winning season.

Time and sun exposure have faded the names a bit, but the sentiment remains, and the new coaching staff is more than happy to accept the relic of Pacific’s football past. In fact, Coach Buckley recognizes one of the signatures: his older brother’s college roommate.

The former bus driver had plenty of stories to tell from his two-year tenure with the old team. Back then, there was no “water girl,” so on several occasions, Schurman took it upon himself to buy water bottles for the players to stay hydrated. At one game, he says, he even snuck across the field and stole the opposing team’s water jug for his own boys. As he explained, his “cargo” was more valuable than all the gold and jewels in the world, and he would have done anything for the players.

On one of his last trips with the team, Schurman remembers vividly, one player, with tears in his eyes, gave him a hug, thanking him for all the rides.

“I was just a little old bus driver,” he recalls humbly. The moment has stayed with him for almost 25 years.

Before Schurman and his wife, Betty, made the drive home to North Plains, Ore., Buckley presented him with an official Pacific University Athletics shirt.

“This shirt comes with a price,” Buckley said, with a dramatic pause. “You have to wear it to a game next fall.” 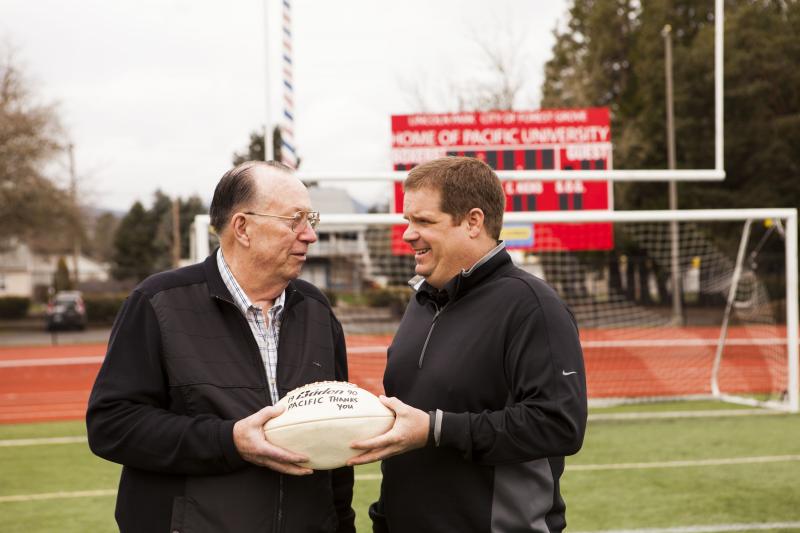