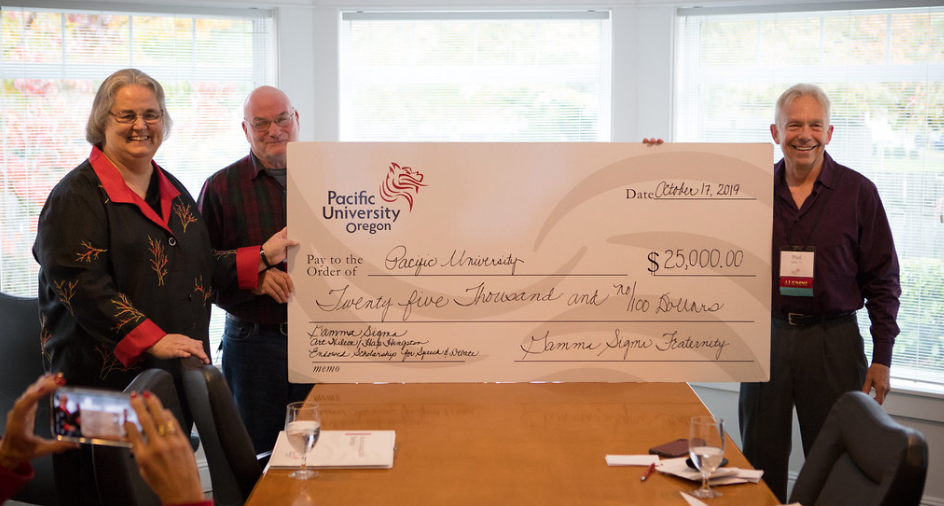 They sang, they ate shrimp, they listened to a student orator, and they pulled out a big check.

Members of the Gamma Sigma fraternity convened at the alumni office during Homecoming 2019 to leave a legacy in the form of a mattress-sized check for $25,000.

While it will never fit an ATM, the check represents the university’s newest scholarship fund: the Gamma Sigma Art Wilcox/Hap Hingston Endowed Scholarship for Speech and Debate. It will be given to students specializing in speech and debate, a longtime specialty of the Gammas.

The fraternity was chartered 14 years after the university itself, in 1863, and from the beginning, it was associated with speech and debate. The members who attended the check presentation ceremony in October still invoke the names of Wilcox and Hingston with a near-reverence. Hingston wrote a couple of speech textbooks, taught at Pacific for 32 years, was named “speaker of the year” by the Oregon Speech Association and was adviser to the Gammas. Wilcox ’58 was a speech major who became a professor.

Cameron Perry ’65, a university trustee and a Gamma Sigma member, was forthright about the establishment of the new scholarship fund: “It was critical we do something,” he explained. The fraternity’s alumni were gathering annual income from the buyers of the former frat house, but with no active fraternity to support, he said, the money was accumulating with no place to spend it.

Gamma Sigma has been inactive for the past three years due to student member attrition.

“I was not expecting anything like this,” said Daniel Broyles, assistant professor and director of forensics in Pacific’s Media Arts Department. "It is nice to see that Gamma Sigma’s support of the university remains alive and well."

Pacific President Lesley Hallick applauded the Gammas for the role they have played in university history.

“The generosity of the Gammas shows through, year after year,” she said, after posing for pictures with members and the oversized check. “As you know, we are incredibly grateful.”