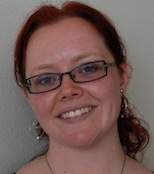 Having been immersed in virtually every part of Pacific University since childhood, Gaston resident Tori Eaton still wasn't exactly sure where her student experience would ultimately take her professionally.

But John White, director of the university's School of Occupational Therapy, had a hunch.

"You sound like an occupational therapist," he told Eaton during her undergraduate studies.

Eaton's life journey thus far is like few others. Her biological mother Valerie Edwards-Robeson, a Pacific student at the time of Eaton's birth, allowed her to be adopted by Barbara Eaton, the secretary of former dean Charles Trombley.

Tori Eaton practically grew up on the Pacific campus and, as a child, her family encouraged her to participate in volunteer activities, in line with the university's culture of helping others.

In graduating with a bachelor's degree in international studies and Spanish, Eaton's initial goal was to serve the Spanish-speaking population within Washington County.

Eaton knew her life's work would include helping others, possibly in an area of public health. But as an occupational therapist?

She had heard about the College of Health Professions' graduate program during her sophomore year. While serving as a language interpreter for the OT program, she would see White regularly and he persisted that she apply. Still, she wasn't so sure.

Yet as she prepared for her 10-month Fulbright trip to Ecuador following graduation in the spring of 2005, White checked in again.

Eaton thought little of that latest encounter as she trekked to South America to investigate social changes in the lives of people suffering from Hansen's Disease, commonly known as leprosy.

As a researcher and volunteer at the Damien House, she provided health and spiritual care for 50 inpatients and more than 400 outpatients and their families.

In doing so, she began to understand the emotional scourge the disease inflicts on its victims.

Despite its status as a treatable and curable condition, the stigma that comes with a communicable disease as old as civilization itself can wreak havoc on a person's self-worth.

So Eaton took it upon herself to comfort her patients' minds as much as their bodies.

"Their heartfelt thanks made me forever grateful to the Fulbright program for the opportunity," Eaton said. “It was important to me that they be able to do the things throughout the day that were meaningful to them, and I enjoyed adapting activities so they could succeed.”

Eaton's return home included a subsequent chapter at Pacific and local community service as she sought to solidify her career calling.

She volunteered at Hospice & Palliative Care of Washington County and worked in the University's Office of Academic Affairs, processing all documentation for the 2007 reaccreditation study and providing support to the Institutional Review Board.

In early 2008, she founded the Forest Grove Severe Weather Shelter at the United Church of Christ and eventually developed employment opportunities for the University's Work-Study program.

Still looking into a health career, Eaton applied to a master's of public health program at Tulane University in New Orleans.  Public policy would be interesting, but would the lack of one-on-one client contact be sufficient?

White's voice kept playing in the back of her head. She also reflected on a moment in Ecuador when a hand surgeon asked her if she was thinking about going into occupational therapy.

After friends pointed out that her past work aligned with OT, Eaton decided that helping others with limited physical capabilities perform tasks was indeed her calling after all.

She was accepted into Pacific's program in spring 2009 and has served as the student representative to the Occupational Therapy Association of Oregon Executive Board.

Her board position is just one of several initiatives she undertook while an OT student.

As an unofficial member of the university's Center for Gender Equity, Eaton worked to bring the center's programming to the Health Professions Campus. In April, she presented a brown bag seminar to fellow Health Professions students and faculty titled "Sex, Intimacy, and Client Concerns: An Intro for Healthcare Providers."

Eaton also partnered with a College of Optometry faculty member on a case study involving pediatric care and the development of a vision training program.

She recently completed a proposal for the Virginia Garcia Memorial Health Center to offer occupational therapy services for its patients living with chronic pain.

Thanks to Eaton, the Severe Weather Shelter is now a full-scale operation that includes a personally trained staff of 20 Pacific students. In March, Rotary of Forest Grove honored Eaton by naming her its 2012 Michael Ward Community Service Award recipient.

After she obtains her master's degree, Eaton's work at Pacific is not quite finished. She is also working toward a Graduate Certificate of Gerontology with an anticipated completion date in December.

Even then, Eaton concedes, Pacific University's culture and values will remain the heart of her life journey.