Give In, Give Up, or Resist: A Timely Retelling of a Modern Classic Asks What Would You Do? 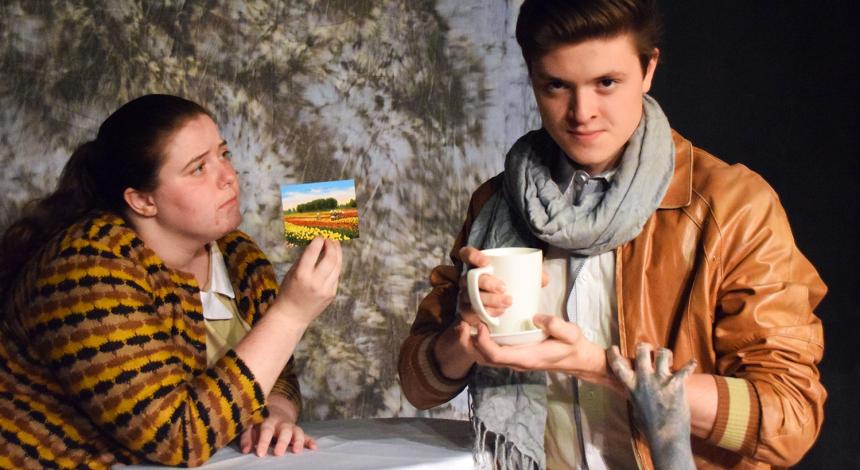 Inspired by Eugene Ionesco’s Rhinoceros, Ellen Margolis’s Hide comes to life at the Tom Miles Theatre at Pacific University this fall. Aiming to present the thrust of the story in a more efficient, contemporary structure, Margolis wrote a more gender-conscious play, reconceiving some roles and investigating the gender differences in characters’ reactions to the events of the play.

In a streamlined 80 minutes, Hide shows us two days of growing chaos in a time not unlike our own. An ensemble of café patrons, a waitress, and the café’s owner witness something extraordinary: a rhinoceros stampeding down the street right in front of them. As the number of rhinoceroses in the city grows, each character must decide for themselves to join or resist the enticing group.

“The craziness of the past year in our civic life got me thinking about Theatre of the Absurd and its fascination with denial. Ionesco, Beckett, Pinter, Albee all had a lot to say about the madness of willful refusal to see what's happening before our eyes. Rhinoceros in particular seemed ripe for a second look,” says Margolis. All of this becomes fertile ground for guest artist and acclaimed director Matthew B. Zrebski.

“Matt is one of the most talented directors in the country!” says Margolis. “He's inventive and disciplined, and he brings a great skill set in both physical and musical composition. And he's a dedicated educator as well. I'm always looking for ways to work with Matt, and for our students to get to work with him!”

Matthew B. Zrebski is a multi-award winning theater artist whose career has been defined by new work development.  He recently directed the professional productions of Bob: A Life in Five Acts, Orlando, and the premiere of I Want to Destroy You. His work has been featured in JAW, One World Theater Conference, and the Edinburgh Fringe Festival.  Matt is the Resident Teaching Artist at Portland Center Stage and instructs for Oregon Children’s Theater’s Acting Academy.  He is also the Director of Education for Playwrights West and founded the Annual New Works Festival at Lincoln High School.

“I’ve always been attracted to the mythology of mid-century… this fantasy of looking back at World War II and the perfect suburban life and then this idea of the perfect rise of equality in the 60s. Of course none of it happened,” says Zreksi of staging the production in an ambiguously mid-century American city. “I think there’s something fun about going to that slightly more formal place. It gives us a place to start from that looks more idyllic. And then it can transition us into something much more disheveled and destroyed by the end of the piece.”

Professor Tal Sanders’ scenic design utilizes height and lighting isolation techniques to skillfully draw the eye to whichever conversation is center focus. To bring alive the era of Zrebski’s vision, Costume Designer Melissa Heller is adding a modern twist to the mid-century fashion vocabulary. “The characters look as if that mid-century style had carried on into 2017,” says Heller.

“I like it when a piece of theatre asks questions. And when it poses that question in a way that is both accessible to an audience but also might be somewhat off-putting, so that it can create a level of discomfort that maybe sparks conversation when the curtain comes down,” says Zrebski. “And I think that Hide has all the potential to do all of that.”

The show will have four performances in the Tom Miles Theatre, Warner Hall, at Pacific University’s Forest Grove Campus, running Thursday through Saturday, Oct. 26-28, at 7:30 p.m. and Sunday, October 29, at 2 p.m. For tickets and information, please visit tinyurl.com/pacutickets.