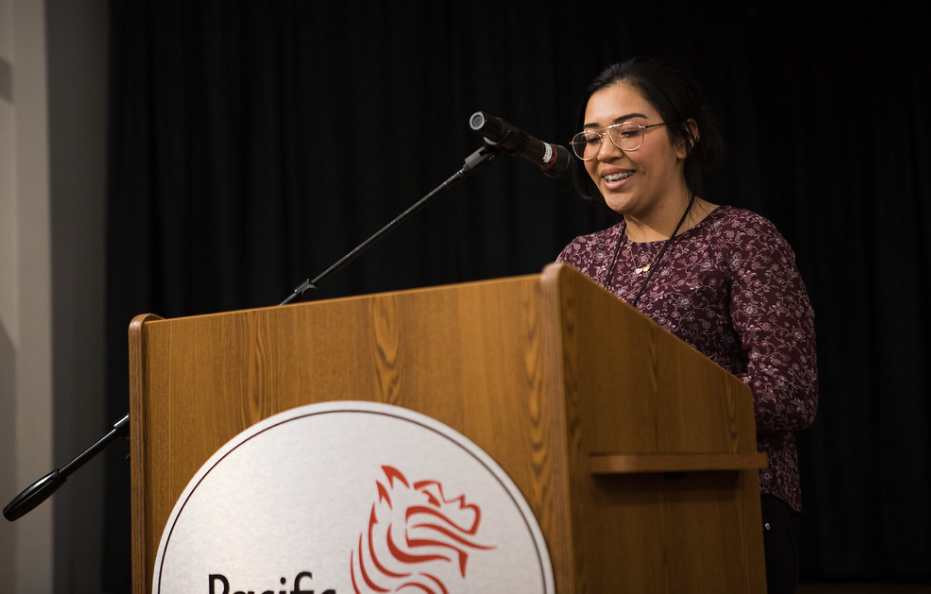 For Guadalupe “Lupe” Flores ’21, Pacific University is a sort of cultural and academic bridge between her family’s rural past and her promising future.

The 20-year-old junior from Umatilla, Ore., population 7,132, is one of the two newest recipients of Pacific’s Golden Guard Scholarship, which is awarded to deserving students who are the first in their families to attend college. Flores, along with Favian Campos-Pena ’20, were presented at a luncheon of the Golden Guard — alumni who had attended 50 or more years earlier — during Pacific’s Homecoming weekend.

Flores’ parents came from Mexico before she was born, settling in northeastern Oregon to do agricultural and factory work. Neither had attended college, and they weren’t familiar with the way American students go about applying and attending. Guided by counselors and college advisers in Umatilla, they came to learn about FAFSA, as well as the choices and resources available to their daughter.

During her selection process, Lupe Flores brought her parents along on visits to Pacific, Linfield College and Eastern Oregon University. She fell for Pacific immediately.

“I liked this place so much,” she said. “I love how small the classes are.”

One of the classes that captivated her after she enrolled was a criminal justice class taught by former assistant professor Taryn Vanderpyl. Flores and her classmates met with inmates at the Oregon State Penitentiary and also worked with youthful offenders at the Harkins House Juvenile Shelter in Hillsboro.

The adult inmates, who had been designated among the most trusted in the facility, “were all so kind” to the students, she said. “It was more sad to see the children coming up to see their parents.”

Flores, who entered Pacific last year as a sophomore, thanks to her advanced placement work in high school, declared her major would be criminal justice, with a double-major in sociology. She wants to focus her work on at-risk youth.

She told her story at the Golden Guard luncheon, thanking the 50-years-ago students for helping to make it possible for her to follow in their footsteps. “The great thing about Pacific is that there are so many opportunities to explore,” she told them.

The scholarships she and Campos-Pena were awarded were launched by the Golden Guard classes of 1966 and 1967 and have been added to by subsequent classes. The fund now stands at about $110,000.

Forest Grove Mayor Peter Truax ’68, MAT ’83, who was master of ceremonies at the Golden Guard luncheon, described the Golden Guard scholarship as a kind of payment from an earlier generation of students to current generation. In time, he suggested Flores, Campos-Pena and others, too, will financially support Pacific students who aren’t yet born.

Flores said her family has always regarded education as vitally important, but weren’t equipped to navigate the process alone. But they are proud of their daughter at Pacific and look forward to hearing about her experiences when she drives the 4-1/2 hours home to visit.

“I really miss my family,” she said. But the separation has gotten easier now that her mother has gotten a smartphone.

If you'd like to apply for a Golden Guard scholarship, bookmark this page