Hawaii to Wexford: McKenna Davidson '16 is right at home

By
Mary Hannigan, The Irish Times 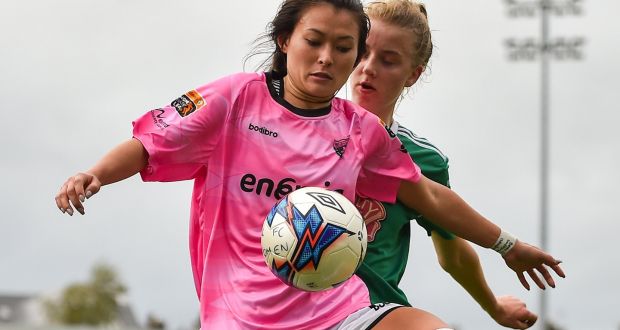 This article was published March 14 in The Irish Times. It is republished here by permission.

The visa people didn’t know quite what to make of McKenna Davidson when she made her application to come to Ireland in July of last year. They hadn’t, after all, come upon all that many Hawaiian women who needed permission to enter the country to play for a football club. And the fact that she wouldn’t be paid for her efforts made it tricky to figure out if this was business or pleasure.

No such issues arose ahead of her previous stay in Ireland, Davidson having spent 2016 studying at the University of Limerick as part of her degree in international business, which she had started at Pacific University in Oregon. It was while playing with UL that Davidson was spotted by current Wexford Youths assistant coach Jamie Buckley, so when she was looking for an opportunity to return to Europe to continue her football career, having had spells with clubs in Chattanooga, Seattle and Fresno in the Women’s Premier Soccer League (the second tier of the women’s football in the States), Wexford invited her to join up on Buckley’s recommendation.

“I just thought, ‘why not?’ I hadn’t started a career yet, I got my degree, so when I had the chance to come back I thought it was a no-brainer. I’d already been to Ireland, I loved it, I love the people here, and on top of that I’d get to play football. The only hard thing is not having a work visa.”

The 24-year-old had hoped to be granted one so that she wouldn’t have to live off her savings while here, but – so far, at least – it has been denied her. “It was a frustrating process, I think they just didn’t understand why someone from the States would come to Ireland to play women’s football,” she laughs. “I ended up with a holiday visa which I have to apply to have extended every 90 days. If I’d been a guy coming to an Irish club even on a minimum wage contract there would have been no problem, I could just have applied for a sports permit. But because I’m not earning anything there’s no real way around it. So, I’m not allowed work. It’s a little stressful, but I’m staying optimistic, I’m hoping something will work out.”

It has, then, been a costly spell for the American, but on the footballing front it has been richly rewarding, Davidson arriving midway through a season that finished with Wexford doing the treble, including retaining their league title, as well as playing Champions League football.

“It was an amazing season for us. I wasn’t sure what to expect when I arrived, I knew the team was really successful, but I wasn’t sure what the standard would be, but when I got here I was very happy. They are so hard-working and driven, it’s a great environment to be around.”

She began playing football back in Hawaii when she was just four, and she doffs her cap to her parents’ efforts to ensure she could keep it up, despite the not inconsiderable obstacles. “I’m from the Big Island but soccer would have been most competitive on the island of Oahu, so I would have to travel there by plane when the team had matches or tournaments. So, I have to give them a lot of credit, things aren’t free, especially that travelling – I couldn’t have pursued soccer without their help.”

When, in later years, the opportunity to spend that time in UL arose she was hesitant at first, but, she says, “it ended up being the best decision I could have made. It was just about broadening my horizons, being from Hawaii you don’t really think about the world beyond, you’re in your own little island bubble”.

She didn’t hesitate, then, to return to Ireland last year, although those early days, when she rented a room in Carlow, were tough. “I went through a period kind of questioning what I was doing here, I didn’t know anyone in Carlow, I was by myself all the time, I was lonely, but getting to know the girls made it easier. They were all so welcoming and kind to me, we’re not just a team, we’re not just a bunch of girls playing football, we’re a family. It was such a good feeling coming back for the new season and walking in to that dressing room knowing that there were people there who care about me.”

This time around, having been signed up again by the club, which opened the defence of its league title with a 3-0 win over DLR Waves last weekend, things are very different on the home front, Davidson now sharing “a cute little farmhouse” with her partner Thomas Croke, a midfielder with Wexford Youths.

“I’m lucky to have found him,” she says. “Neither of us has ever dated another footballer, so it’s a new one for us! But it’s great, I didn’t really have a life outside football, I do now with Thomas.”

Her name, meanwhile, might hint at an Irish connection, but as far as she knows, there’s none. “My mom just thought McKenna was the most beautiful name, she was in love with it, so she chose it for me. But I come here and people say ‘what’s your name?’ I say ‘McKenna’, and they say, ‘no, what’s your first name?’ So, yeah, I have two last names,” she laughs.

She’s loving her latest adventure in Ireland, and credits her grandmother for imbuing her with a spirit that encourages her to follow her dreams. “My dad’s mom was one of my heroes, the life she lived is probably why I am the way I am. She and my grandfather married when they were 17 and 18, then they bought a van and travelled around the whole of the United States until they went broke. “And then my grandmother had a dream of owning a ranch, so they both moved to Hawaii, and bought a ranch. And that’s how they created their life there. A life that was honourable.”

“Sometimes I get concerned about what people will think about my life – I’m not getting paid, I am spending so much money out of my own pocket, but I just think this isn’t about the money, this isn’t about pleasing other people, this is my life. I love playing football, I never thought I would be able to once I left college. So yeah, this is a dream for me.”