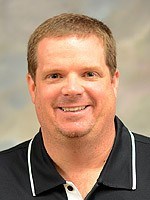 For the last nine years, head football coach Keith Buckley has been a key contributor to the athletic department at Pacific University. In recognition of his work for the department on a number of key initiatives, Buckley has been elevated to an assistant athletic director role in addition to his duties as head football coach, as announced by Director of Athletics Ken Schumann.

Buckley is the only head coach that Pacific University has known since reviving the football program in 2010. In a very short period of time in football years, the Boxers have become one of the top teams in the Northwest Conference.

In developing the football program, Buckley has established a pipeline from the 50th state (Hawai'i) to the Forest Grove campus. In 2017, there were 25 student-athletes from Hawai'i on the Pacific football team which is the second most in NCAA football. In addition to his role as the head football coach, Buckley has been a member of search committees for various roles on the Pacific University campus.

Buckley enters the 2018 season as the third all-time in career wins among Pacific head coaches behind Hall of Fame members, Paul Stagg and Frank Buckiewicz, Sr. He was named the head coach of the new Pacific football program on July 31, 2009.  He arrived in Forest Grove after four seasons as part of the coaching staff at UC Davis to lead Pacific's first football team since 1991.

"In addition to being an outstanding football coach, Keith has shown over the past nine years the characteristics of an excellent administrator," said Schumann. "I am thrilled to welcome him to our senior administrative team in the athletic department and am looking forward to working with Keith on initiatives for the betterment of all of our student-athletes and programs at Pacific. We are very fortunate to have two outstanding administrators working with me to move Boxer Athletics forward in Keith Buckley and Lauren Brownrigg (Associate Athletic Director/Senior Woman Administrator)."

A native of Milpitas, Calif., Buckley and his wife, Kara, are the proud parents of two daughters, Kristen and Kaitlyn.