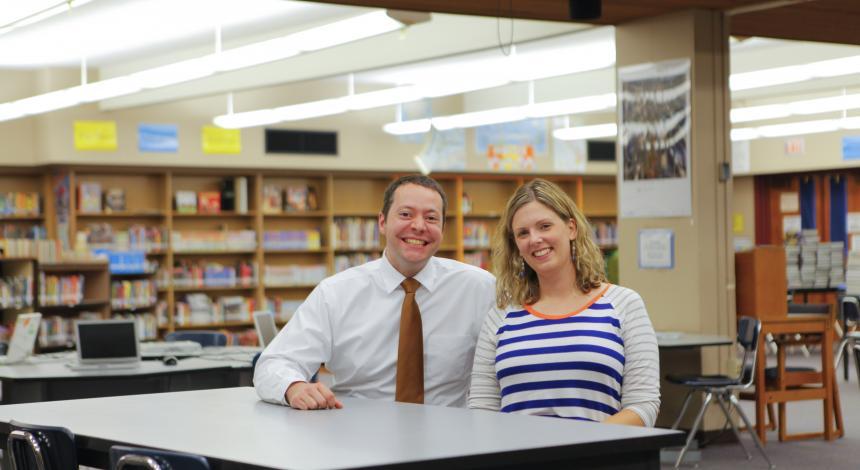 Dave Furman MAT ’06 and Jessica Richter-Furman MAT ’06 traveled down different roads. But their paths intersected when they sought their graduate teaching degrees at Pacific University.

“Pacific has a fantastic reputation in the teaching world, especially in the western Washington County,” Richter-Furman said. “They prepare their graduates well for surviving in education.”

Originally from Gaston, Ore., Richter-Furman didn’t initially see teaching as a career option. She earned her undergraduate degree in communications and literature from Linfield College and planned to become a journalist or writer. Then, she spent two years with AmeriCorps, tutoring high school students in math.

“I had never considered myself to be very good at math and here I was working with teenagers, and I thought teenagers were probably not the kind of people I imagined myself working with and then all of a sudden I got there and thought, ‘What was I thinking? Teenagers are amazing,’” Furman-Richter said. “I fell in love with working with kids, and I ended up coming back to Forest Grove and getting enrolled in the Masters of Arts in Teaching Program.”

Her husband, on the other hand, knew early on that he wanted to work with younger children. During high school, he taught natural science as a camp counselor, then he attended the University of Oregon, majoring in Japanese language and culture.

As an undergraduate, he studied abroad in Tokyo, Japan, and taught English at a cram school, tutoring small groups of students to help them get ahead of their regular English language classes.

After graduating, he returned to Japan with the JET program, spending about 10 months working as a coordinator for international relations, translating and interpreting.

A large component of his work involved teaching a community English class to senior citizens.

“It was super interesting to work with people who really have no reason at all to learn English,” he said. “Some of the seniors were intending to travel, but for the most part they were just keeping their brains busy.”

He later worked in a private nursery school in Japan, then taught in middle schools while managing a group of English teachers.

Two years later he returned to the United States.

“I came back and decided I wanted to teach literature instead of English as a foreign language, so I got my MAT at Pacific,” Furman said. “I had several friends who graduated and immediately enrolled in Pacific’s MAT program and found immediate employment in the Beaverton School District.”

The couple, who met during the program, also found quick employment after graduating from the MAT Program: Furman at Westview High School in Beaverton and Richter-Furman at Hillsboro’s Liberty High, where she was an educational assistant before earning her teaching license.

“When I graduated I went to a job fair and one of the administrators I worked with at Liberty High School was there and he said, ‘We want you,’ and that was basically that,” Richter-Furman said. “It’s been a family for me there, and I really care about the kids and the community; it’s a great place to be.”

In addition to teaching language arts, Furman has served as student activities director and a summer school teacher. This fall, he starts a new role as assistant principal of Meadow Park Middle School in Beaverton.

“It’s a natural progression in my career at this point,” Furman said. “It’s sort of like giving up direct control to a small number of students to have indirect influence over a broader number of students, and that’s kind of the direction that I’m interested in heading.”

When they aren’t teaching, the couple spends time walking their dog, Oden, through Pacific’s campus near their home in Forest Grove. They also enjoy camping and paddle boarding at Hagg Lake in the Washington County.

They also stay connected to their alma mater as members of the College of Education Alumni Council, and he represents the chapter on the Alumni Association Board of Representatives.

“Our involvement in Pacific is an opportunity for us to remain tied to the place where we first met, while trying to provide avenues for new students to choose Pacific, current students to connect with education professionals, and alumni to get together and discuss issues in the field,” Furman said.

“It would be easy to have a shallow or non-existent relationships with the school, compared to students who spend their undergraduate careers at Pacific. [But the school] cares at all levels, and the university is proud of the accomplishments of all alumni.”