Mandy Bowdoin OTD '19 Traveled a Hard Road to Her Degree 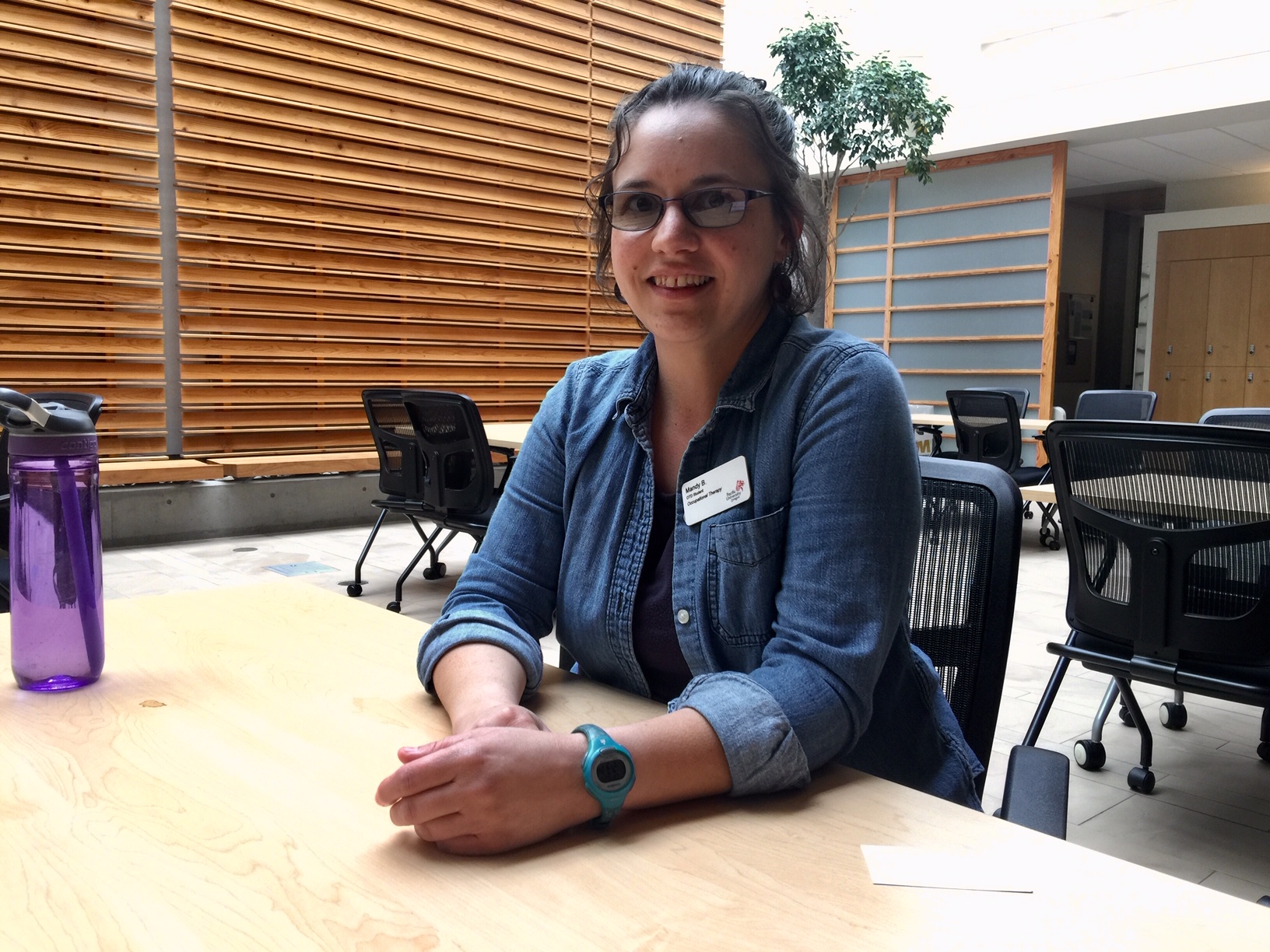 When Mandy Bowdoin OTD ’19 participates in the School of Occupational Therapy’s Pinning Ceremony on Aug. 9, she will face a stark reminder of how far she’s come.

The person who will place the pin on her clothing, Jodi Johnson, was Bowdoin's own occupational therapist as she recovered from a serious brain injury in 2012. In fact, Johnson OT ’04, encouraged Bowdoin to look into Pacific University’s occupational therapy program as Bowdoin was reconsidering the course of her career following the life-changing injury.

When she was an adult college student living in Bend, Ore., Bowdoin imagined herself as a high school English teacher, or math teacher. She thought either role would be a good match for her interests and abilities.

But, in a lighthearted moment on a playing field, her life changed. She had just begun running at top speed when another student kicked a soccer ball, which tripped her up and sent her flying to the hard-packed earth.

“I was lying there thinking, ‘That was really hard’,” Bowdoin remembered. She said her neck hurt, but she had no idea she had suffered a brain injury, too. She didn’t learn the implications of her fall until later.

Attending providers at the urgent care facility told her she may have suffered a concussion. She had, but because brain injuries are invisible, it’s hard to understand when they’ve occurred. The damage was extensive and long-lasting.

She looked at medical forms, and they made no sense to her. She had been a straight-A student, but after the injury, she couldn’t understand the meaning of paragraphs she read. She couldn’t add seven and five in her head. She suffered “intense” headaches, was constantly fatigued and always sleepy. She was sensitive to light and sound, a condition that persists to this day. If a fire bell peals, she said, the clamor disables her.

It was nine months after she was hurt before Bowdoin was referred to a rehabilitation center, where she began her long journey of recovery.

Therapists worked with her to strengthen her body and restore her speech. Then she began receiving occupational therapy — therapy intended to help her regain her life skills. She relearned how to load the dishwasher, to go grocery shopping, to do housework, and she learned adaptive movement techniques that would match her abilities to stand, to lift and to think.

Her old academic career had ended. So had her plans. In their place, new ones began to form.

She recognized that she would likely need to work in a different environment than a noisy classroom, Bowdoin said. At the same time, “I was intrigued by what was happening around me.”

Therapy was an eye opener, a mind changer.

“It was exciting to me when things went well,” she said. In therapy, she played the violin and painted with watercolors, a process that helped teach her that the most effective therapies use activities that patients already love, or must do.

An occupational therapy assistant was the first to tell her, “You know, you would be a good OT.” Later, Johnson, her primary occupational therapist, said the same. She encouraged Bowdoin to consider Pacific, where Johnson had gotten her own OT degree.

“The field of occupational therapy seems natural for Mandy,” said Johnson, who is flying from her home in Colorado to attend the pinning ceremony. “She is very creative and thinks outside of the box. Her road to recovery just adds more depth to her as a person. She will only be more empathetic and more insightful … as an occupational therapist.”

In time, Bowdoin returned to school, earning her undergraduate degree at Oregon State University’s Cascade Campus in Bend. Then she applied to, and was accepted by Pacific to pursue a doctorate in occupational therapy.

The three-year program concludes with a pinning ceremony, in which graduating students receive a pin marking the culmination of their doctorate program, followed by the university's August Commencement on Aug. 10, where they receive doctoral hoods and degrees.

On the eve of graduation, Bowdoin is reflective.

“In a lot of ways, I’m in a new life,” she said. “My abilities are a little different.”

She thought back to all the help she’s had along the way, from her own therapists to her professors, friends and Pacific classmates. She has loved her OT program, she said.

“I’m excited about what’s next. I still have challenges,” she said, referring to her noise and light sensitivity. “But with the right fit, I can do a good job.”