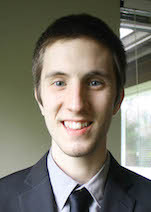 Pacific University's valedictorian for the class of 2014 is Matthew Morse, a resident of Grants Pass who will graduate with a bachelor's degree in Mathematics and minors in Physics and Biology. He is a 2010 graduate of Hidden Valley High School.

An avid outdoorsman who enjoys hiking and rafting, Morse plans to pursue a career in the health sciences. His senior research focused on modeling the electrical activity in the heart. The results of his work demonstrated features associated with Long QT Syndrome, a condition that contributes to development of certain arrhythmias.

"Math and physics play a big role in our understanding of the circuitry and electrical impulses of the heart, as well as nerves and how they interact with the brain," Morse said.

Originally interested in a medical career, Morse plans to spend the next year gaining work experience. He has applied to positions at Three Rivers Medical Center and Health Physics Northwest, a consulting firm that provides accreditation and compliance support for medical equipment such as MRI and CT scanners. He will then pursue graduate studies and a career in the electrical work of prosthetic devices.

Morse believes strongly in knowledge sharing. During his time at Pacific, he has tutored scores of students in math, physics and chemistry. He also served as the Math Department's historian, and volunteered at the university's B Street Permaculture.

"My father passed away during my sophomore year," Morse said. "When we would work together on cars and boats, he would always tell me to cherish what others have to say and pass on my knowledge as well so that they can do the same thing to help others."

Morse will address the class of 2014 at Pacific University's Spring Commencement exercises on Saturday, May 17.
Tuesday, May 13, 2014