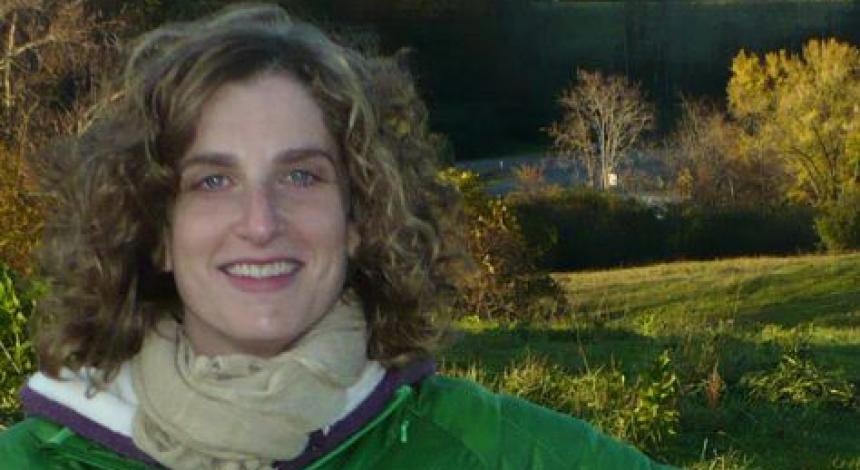 A Pacific University graduate of the master of fine art’s program in writing is receiving praise and accolades for her first novel, Flashes of War, to be officially released May 27, 2013, in Asheville, N.C.

Katey Schultz MFA ’08, who now lives in the tiny community of Celo, bordering the Pisgah National Forest in North Carolina, credits Pacific’s MFA program and one of her advisors, Claire Davis, for much of her success in authoring the book.

Flashes of War is a fictionalized collection of short stories about people affected by the current wars in Iraq and Afghanistan, including soldiers, civilians, men, women and children on all sides of the conflict.

Schultz grew up in Portland, graduated from Wilson High School and attended Whitman College in Walla Walla, Wash., earning a degree in philosophy in 2001. She went on to do two stints as a teacher in AmeriCorps and eventually earned certification as a Montessori teacher.  She now teaches writing workshops and mentors via correspondence, but writing is her full-time passion.

“I loved teaching — and I still do — but it was something I didn’t want do full time,” Schultz said. She applied to six different MFA programs in creative writing, but Pacific was her first choice, in large part because of the rigor of the program and the faculty, who hailed primarily from the West, as she did.

Schultz started the program in 2006 with an emphasis on creative nonfiction, but said she couldn’t stop writing fiction after she graduated.

“It’s really a testament to the cross-genre exposure at Pacific,” she said. “For two years, I was being inspired by everyone’s work on the faculty.”

“By way of her mentorship, she gave me permission to explore fiction on the side,” Schultz said. “That was a real gift because it ended up freeing me in ways that strengthened my creative nonfiction, and paved the way for Flashes of War a few years down the line.

“She’s definitely the writer on my shoulder when I work, a kind of Jiminy Cricket.”

For her book, Flashes of War, Schultz said that, although she spoke to a couple of soldiers about the logistics of contemporary warfare, she did not do interviews and the stories are definitely fiction.

“For me, every story starts with an unanswered question …. As I imagined my way into characters, my own heart opened up to them,” she said.

Although the stories in the book are related to war and its effects on a variety of people, she said, “I wouldn’t describe it as a political report …. They are stories about bringing people together.”

Schultz’ book is available at the Pacific University Bookstore in Forest Grove, at Powell’s Books in Portland, and through Amazon.com and the author’s website, http://www.kateyschultz.com. Schultz also will be making an appearance at Annie Bloom’s Books in Portland this fall to promote the book.

Schultz is also the recipient of the Linda Flowers Literary Award from the North Carolina Humanities Council. The award is given to authors who explore the experiences of lives shaped by North Carolina and its many cultures.

The Military Writers Society of America awarded Schultz its 2013 Gold Medal for Literary Fiction Book of the Year in the fall of 2013.