New Book Offers Answers: “What Good is a Philosophy Degree?” 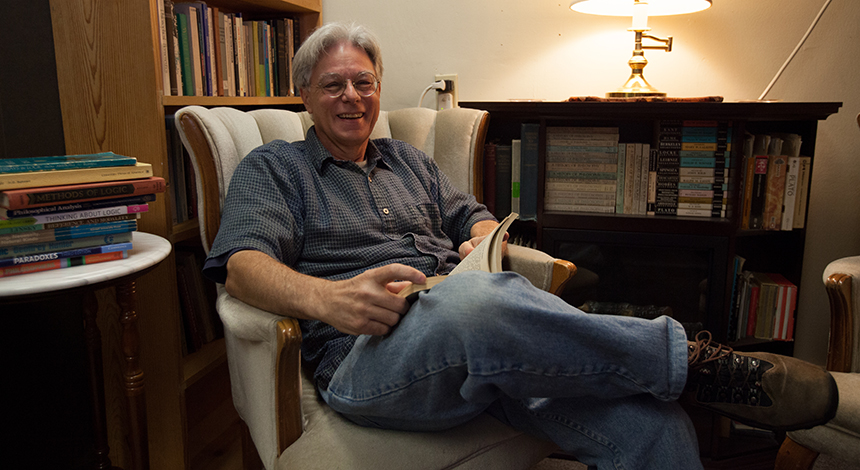 Philosophers face life’s big questions: What is consciousness? Do I have free will?

And maybe most frequent: What can you do with a degree in philosophy?

The result is a new book, What Can I Do With a Degree in Philosophy?, edited by Boersema and published by the published by the Pacific University Libraries’ Bee Tree Books imprint. The book offers a series of short essays by Pacific alumni who majored in philosophy.

Boersema says his own parents years ago asked the question about a philosophy degree “in a rather unpleasant way.” And during his teaching career, he heard it over and over from students and parents: “What do you with a degree in philosophy?”

There is no single answer, but the essays Boersema collected illustrate that the most important thing philosophy majors can do is to learn how to think. The essays are written by people who don’t sit around in garrets, pondering the mysteries of existence, but who are participants in the same hurly burly of life that engages us all.

Attorney Tim Chambers ‘91 says philosophy equips a person to test arguments, but more important, to solve problems. He likens it to being an auto technician.

“There may be technicians who can work on a particular part like a carburetor,” he writes. “But true mechanics with a deep understanding of their craft are able to take apart and reassemble an entire engine. Philosophers are the true mechanics of thought, able to step back, identify and articulate a theory, and then disassemble, reassemble, refute or work their way through that theory in their own individual way. There is no better skill for not only pretty much any given trade, but life in general.”

The essayists in Boersema’s book are authors, business owners, consultants, lawyers, educators and government administrators. One of the liveliest essays was written by Molly McDonnell ’05, who owns and operates Newberg Mail Room Shipping Co.

She describes climbing the ladder through a series of unfulfilling jobs: “I thought that the higher up the ladder I went the less it would suck but maybe I wasn’t high enough up the ladder because it still sucked.”

Her Pacific philosophy degree led her first to General Motors, which hired her to be its “eBusiness Coordinator,” but turned out to mean “sales representative.” She found that corporate culture wasn’t a good fit for her, so she bought a shipping company, even though she knew nothing about shipping. It’s turned out well, in more ways than one.

“My degree in philosophy has earned me a net worth of over $3 million and a company culture that I can be proud of. More importantly, it has also given me the knowledge to nurture my soul.”

Management consultant Sean O’Driscoll ’92 joined a young company named Microsoft Corp. and eventually became a student of key influencers in online communities — people who could be advocates for Microsoft products. Understanding those people required an ability to recognize human motivations and behaviors and how they, in turn, could promote Microsoft’s business objectives. Writes O’Driscoll:

“Over the course of these years I became a recognized industry expert in online communities and digital influencers — at the time a niche few cared about until suddenly, the entire industry cared about it. Facebook, Twitter and Social Media burst onto the scene and began to take hold of our culture and business. Fortunately for me, I found myself a leading thinker at the intersection of social media and business strategy.”

When they are philosophy majors, students confront the biggest, most important questions we have; questions like “What is truth?,” writes film editor and producer Christopher Dillon ’95. And, it turns out, “the questions of philosophy are not fleeting but evergreen.”

What Can I Do With a Degree in Philosophy?, Bee Tree Books, 2019, is available for purchase in print at Amazon.com or free digitally for non-commercial use.