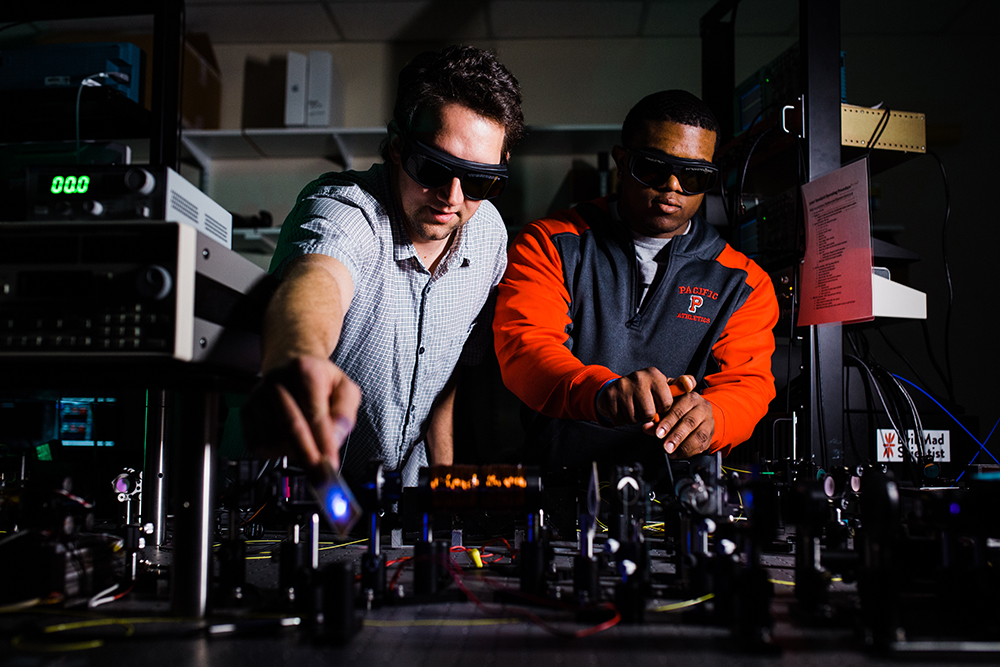 The NSF announced this month it had awarded Dawes and a team of undergraduate researchers a third, three-year grant to study quantum optics. The $69,175 grant will pay for student stipends and other expenses for the next three years as the team seeks to measure the effects of particles, vapors and other atmospheric impurities on the transmission and reception of laser light. The work has implications for the development of long-distance, optical communications channels.

The grant follows a 2012 grant for $167,955 and a 2015 grant for almost $180,000. Those grants paid for the stipends and advanced equipment Dawes and his students will use for the new project in their Price Hall lab.

For the students, the optics project is an opportunity to gain experience doing federally funded research. For Eric LeVally ’09 that has meant everything from tinkering with the alignment of mirrors and lenses to writing software. It was also a chance to find out what work is better left to others.

For example, he and his partner learned that arc welders don’t so much weld pieces of sheet metal together as perforate it. “We sucked at welding,” he said.

After the students tried and failed to fashion a small cloud chamber for the project, Dawes went out and bought an off-the-shelf sheet metal cylinder that will be used to contain vapors in the next round of observations.

LeVally, who has worked with Dawes on the project for the last two summers, said the experience of working with the equipment, building a circuit, modeling components, collecting data and presenting the work has been “incredibly valuable.” During the first week of classes, he and his student partner were writing a report to document the last round of work.

After he earns his bachelor’s degree next year, LeVally plans to seek a master’s in civil engineering.

Simone Carpenter ’11 says working in the physics lab was instrumental to her career, which has included stints as an optical hardware test engineer at Microsoft and as an optical software engineer at Radiant Vision Systems. She’s currently working toward her master’s degree in optics and photonics at Karlsruhe Institute of Technology in Germany.

“The experience I was able to gain in Professor Dawes' lab was really the nucleation point on which I was able to build my career,” she said by email. “Being a female in physics can be difficult but doing research and given the support needed it instilled a sense of confidence that was lacking at that point. It also just gave me pure experience about working in a lab, taking data, learning, using equipment, doing outside research, communicating.”

“Unlike big research universities, Pacific students are the primary researchers,” he said. “They work directly with faculty in a small group and benefit from one-on-one research training.”

Dawes brought his interest in quantum optics from Duke University, where he earned his PhD. The latest NSF grant has allowed him to progressively fund the research, which has involved 16 undergraduates over the last six years.

“I’m proud we can offer a lab environment with the same cutting-edge equipment you would find at top-tier institutions like Harvard and M.I.T.,” he said.

Pictured: Andy Dawes and Kevin McGee '18 in the laser lab at Pacific University