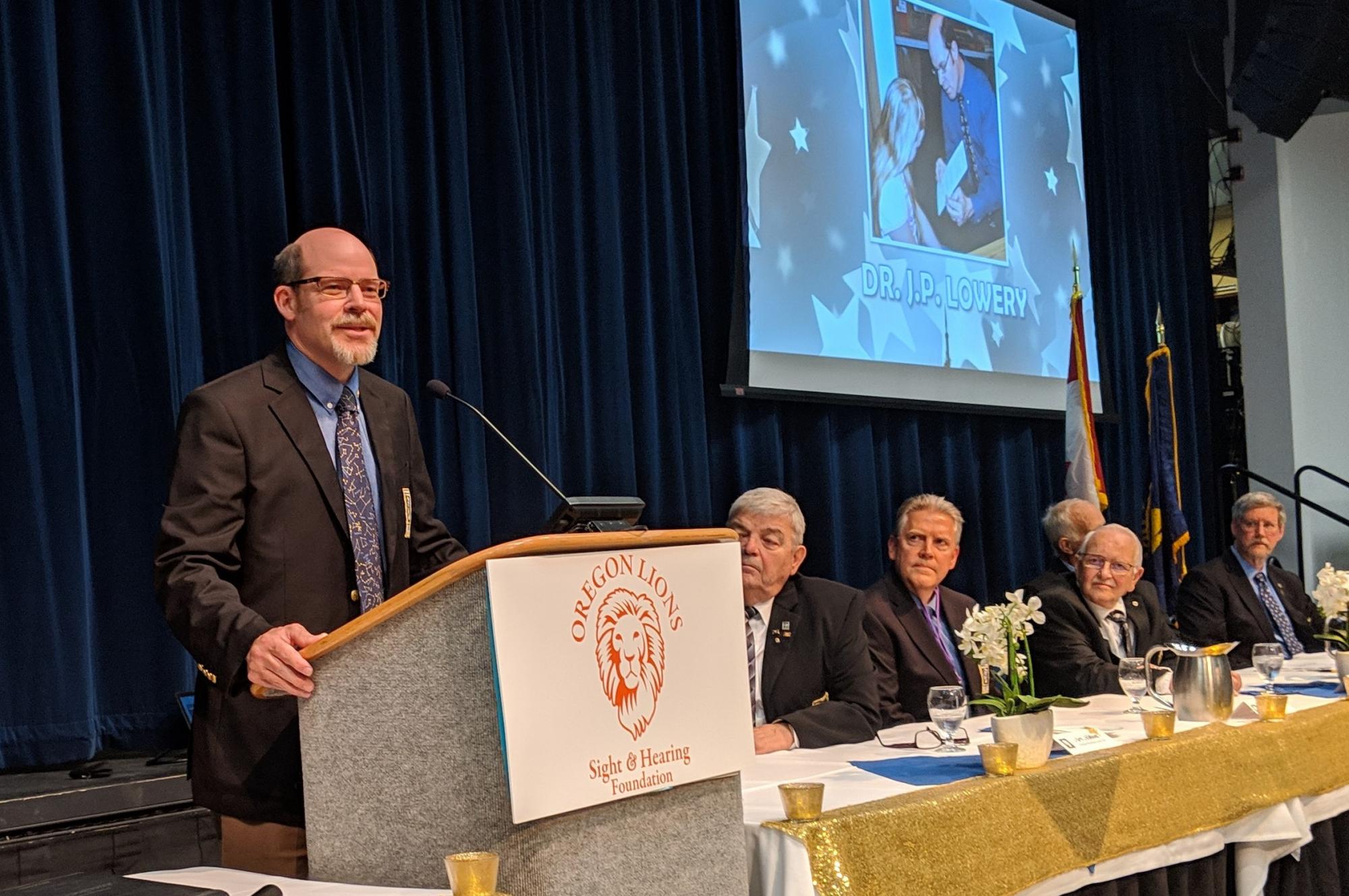 Pacific University College of Optometry Professor J.P. Lowery OD ’93, MEd ‘96, has been inducted into the Oregon Lions Sight & Hearing Foundation Hall of Fame for decades of exemplary service to the organization and to underserved community members.

Dr. Lowery received the honor at the Oregon Lions annual conference in Seaside in May.

In addition to his teaching duties at Pacific, Lowery is currently chief of pediatrics for the Pacific EyeClinics. Lowery's research interests include pediatric procedures, pediatric visual impairments, children with special needs and humanitarian vision care.

As such, he has also served as director of the Oregon Lions Statewide Low Vision Clinic since 1995, providing educationally oriented low vision evaluations for visually impaired children. "I am very honored and blessed to be part of such a fantastic organization devoted to helping our most vulnerable citizens," he said.

Lowery joined the Pacific faculty in 1998 and has taught courses in human development, clinical procedures, public health, pediatrics, low vision and vision-related learning disorders. Additionally, he is a faculty advisor for the college’s AMIGOS student volunteer program, through which he has led many eye care missions to underserved populations all over the world.

The OLSHF annually inducts three individuals (including one posthumous nominee) who have given exemplary service to the foundation for at least 10 years. The 30 all-time inductees have collectively added to the success of the foundation’s stability and increased its ability to provide access to sight and hearing assistance programs.

“Dr. Lowery was elected because his work with our Low Vision Clinic has served children with disabilities throughout Oregon in areas where parents don't have access to the Portland medical community,” OLSHF Board of Directors chair Red Rowley said.

The Oregon Lions Sight & Hearing Foundation and the Lions Clubs of Oregon and Northern California (District MD-36) collaborate to annually screen, diagnose and treat tens of thousands of underserved Oregonians to preserve or restore eyesight and hearing.

Pacific's College of Optometry has enjoyed a longtime partnership with the Forest Grove Lions. The college's AMIGOS program and FG Lions annually co-produce the Run/Walk for Sight + Hearing, which annually raises funds to support patient care for local residents who cannot afford vision care or eyeglasses.

AMIGOS was recently named the Volunteer Optometric Services to Humanity International (VOSH/International) Student Chapter of the Month for May 2019. The recognition comes in response to the four clinic trips it hosted in the past year.

Pacific's College of Optometry has produced thousands of comprehensive practitioners of leading-edge vision care in its 74-year history and is committed to advancing the field through ambitious research.