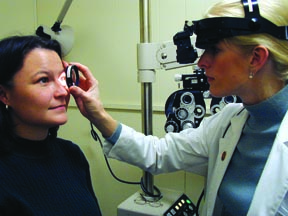 The Oregon Optometric Physicians Association (OOPA) is shaping the vision care of tomorrow by supporting future optometrists in the Pacific University College of Optometry.

OOPA, the only professional association for optometry in Oregon, and an affiliate of the American Optometric Association (AOA), recently established the Oregon Optometric Physicians Association Scholarship at Pacific, which has already benefited five current doctor of optometry students. The scholarship was the first OOPA has ever established.

“Last year we started asking how we could better help the students,” said OOPA Executive Director Janet Baker. “We wanted to institutionalize support for students at Pacific. It’s an investment in them, and a message of support and commitment to the work they are doing.”

The five recipients of the scholarship are all student members of OOPA, and all will be staying in Oregon after graduation to practice optometry.

“Not every state association is lucky enough to have an optometry school in-state, so we are lucky!” Baker said. “We have a close working relationship with the students, faculty members and dean at Pacific. Many of our OOPA board and committee members are students and faculty at Pacific’s College of Optometry."

OOPA supports all future optometrists in Oregon, Baker said, but those who plan to stay in-state are especially important to the future of local healthcare.

“Only around 10 percent of graduating optometry students stay in-state to practice, so we see these scholarships as an investment in the development of the future optometry leaders in Oregon,” she said.

Deidrie Colter OD ’20 was one of the first recipients of the OOPA scholarships at Pacific.

“The OOPA scholarship was a great surprise and a tremendous help for the semester,” she said. “As a graduate student, there are always unexpected costs that aren’t included in the estimation of financial aid. These costs can put an extra pound of stress on our shoulders, and the OOPA scholarship helped relieve some of that stress. I am extremely thankful that OOPA and Pacific University have such a wonderful relationship, and I admire OOPA’s generosity toward us future optometrists.”

Classmate and fellow scholarship recipient Tracy Lukasiewicz OD ’20 said her scholarship helped her get even more involved in OOPA and other professional and networking events. She used the money, in part, to attend the organization’s annual conference — which saw a record number of student attendees this year — and to register for other professional meetings regionally.

“It has also provided funds for transportation to participate in an increased number of screenings throughout the Portland area,” she said.

“While paying off loans and increasing my clinical skills I would like to explore design and creation of active outdoor eyewear,” she said. “My dream is to create my own line under a company I trust, or to start my own company in Oregon.”

That’s the kind of visionary professional leadership that OOPA hopes to inspire through its partnership with the Pacific University College of Optometry.

Pacific is the only optometry school in Oregon and, as such, has a close relationship with OOPA. Membership in the state association is free for students, and they are encouraged to join their first year in optometry school. OOPA membership provides optometry students with the opportunity to build relationships with established optometric physicians and industry professionals early on, with opportunities for networking, mentorship and advocacy, and even practice opportunities as they graduate.

“It’s an opportunity for them to build their resume and leadership experience, and it’s to their benefit to join early, as optometric physicians earn more if they are members of their state association and the AOA,” Baker said. “The doctors love getting to visit with the students at the meetings, as they see themselves in the students and appreciate the opportunity to pass on their expertise and knowledge to a new generation.”

Pacific alumni, in turn, are becoming leaders for future generations through OOPA. At its annual meeting, OOPA elected its Board of Directors for the 2018-2019 year, and Pacific optometry alumni now hold five of the eight seats. At the same meeting, OOPA also presented its most prestigious awards to members who showed outstanding leadership throughout 2017-2018; five of the seven awards presented went to Pacific College of Optometry alumni.

“The college is fortunate to have such a supportive optometry community in Oregon,” said Dr. Jennifer Coyle ’90, OD ’93, MS ’00, dean of the College of Optometry. “The outstanding investment OOPA is making in the future of Oregon optometry through these scholarships is truly special. The support of our students who get involved and shine through their achievements will be celebrated, remembered, and allow new optometric physicians to engage in our profession, with less of a financial burden. I can’t thank the OOPA Board and membership enough for these transformative gifts.”

The Pacific University College of Optometry was founded in 1921 as the North Pacific College of Optometry. It became part of Pacific University and the Forest Grove Campus in 1945, and produces comprehensive practitioners with expertise in general optometry, contact lenses, low vision, vision therapy, sports vision and ocular disease. It was named the 2018 School of the Year by the National Optometric Association, for its ongoing to commitment to providing vision care to underserved populations.

Founded in 1849, Pacific University is a diverse learning community offering a unique combination of undergraduate, graduate and professional programs in the arts and sciences, education, business, optometry and the health professions. Gifts to the university support its $80 million fundraising campaign, Lead On: The Campaign for Tomorrow at Pacific University, which seeks to grow endowments, learning environments and innovations for a boundless future for students. To learn how to support student scholarships, outreach and other programs like OOPA, visit pacificu.edu/lead-on.