By
By Wanda Laukkanen Pacific University alumnus and long-time Forest Grove High School teacher Howard “Butch” Sullivan ’79, MS ’84 is taking on a new role in the city where he has spent the past 37 years. Sullivan is the new executive director of the Forest Grove/Cornelius Chamber of Commerce.

Sullivan retired from teaching last year after 33 years in the Forest Grove School District. As a teacher at Forest Grove High School, he primarily worked as an activity director and taught leadership courses and Advanced Placement American government classes, as well as serving as a facilitator for sporting events.

A native Californian, Sullivan didn’t set out to be a teacher. He was awarded a scholarship from the University of Arizona after graduating from high school in Oceanside, Calif., and started at UA in 1974, hoping to become an engineer.

“I lasted four or five weeks, because I didn’t like going to the computer lab at 2 in the morning to deal with the computer — and so I quit,” he said with a laugh.

He returned to Oceanside and attended Mira Costa Community College, where he excelled at baseball — a skill that turned out to be his ticket to a four-year college. A number of coaches were interested in him, he said, including Chuck Bafaro at Pacific University.

Bafaro convinced Sullivan to come to Pacific, where he played catcher as a junior and outfielder as a senior. He came back for a third year while completing his student-teaching at Forest Grove High School in 1979.

“When I do something, I want to put all my energies into it,” Sullivan said. The third year “allowed me to take all kinds of history, economics, political science and social studies classes.”

It also gave him a chance to see his professors in another light — and he said what he remembers most is how generous and gracious they were.

Marshall Lee, for example, taught Sullivan history at Pacific. But, he also was the father of one of the students in Sullivan’s practicum classes. When they met at a parent-teacher conference, Sullivan was surprised that his former professor “referred to me as Mr. Sullivan and asked me to call him Marsh.

After completing his student-teaching and his time at Pacific University, Sullivan found employment at Neil Armstrong Junior High (now middle school) in Forest Grove. In his 33 years as a teacher in the Forest Grove School District, he taught at the junior high, middle school, upper elementary and high school levels.

He thinks the same emphasis on relationships that is so important in the classroom will serve him well in his new position as chamber director.

The chamber director position is somewhat new, in that the Forest Grove and Cornelius chambers of commerce were previously two separate entities that just recently merged.

“Right now, I’m learning what I will be doing … the next couple of weeks will be going to meetings and workshops to decide what our vision will be,” he said.

McCabe is Pacific’s assistant football coach and worked with Sullivan for many years in the school district.

“I think the first thing that comes to mind when I consider Butch in his new role is his ease and ability to work with various people and situations,” McCabe said. “Butch always holds a calm demeanor which allows everyone he works with to feel valued and respected.” 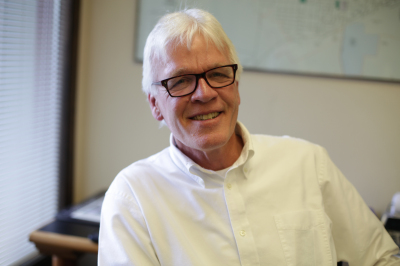