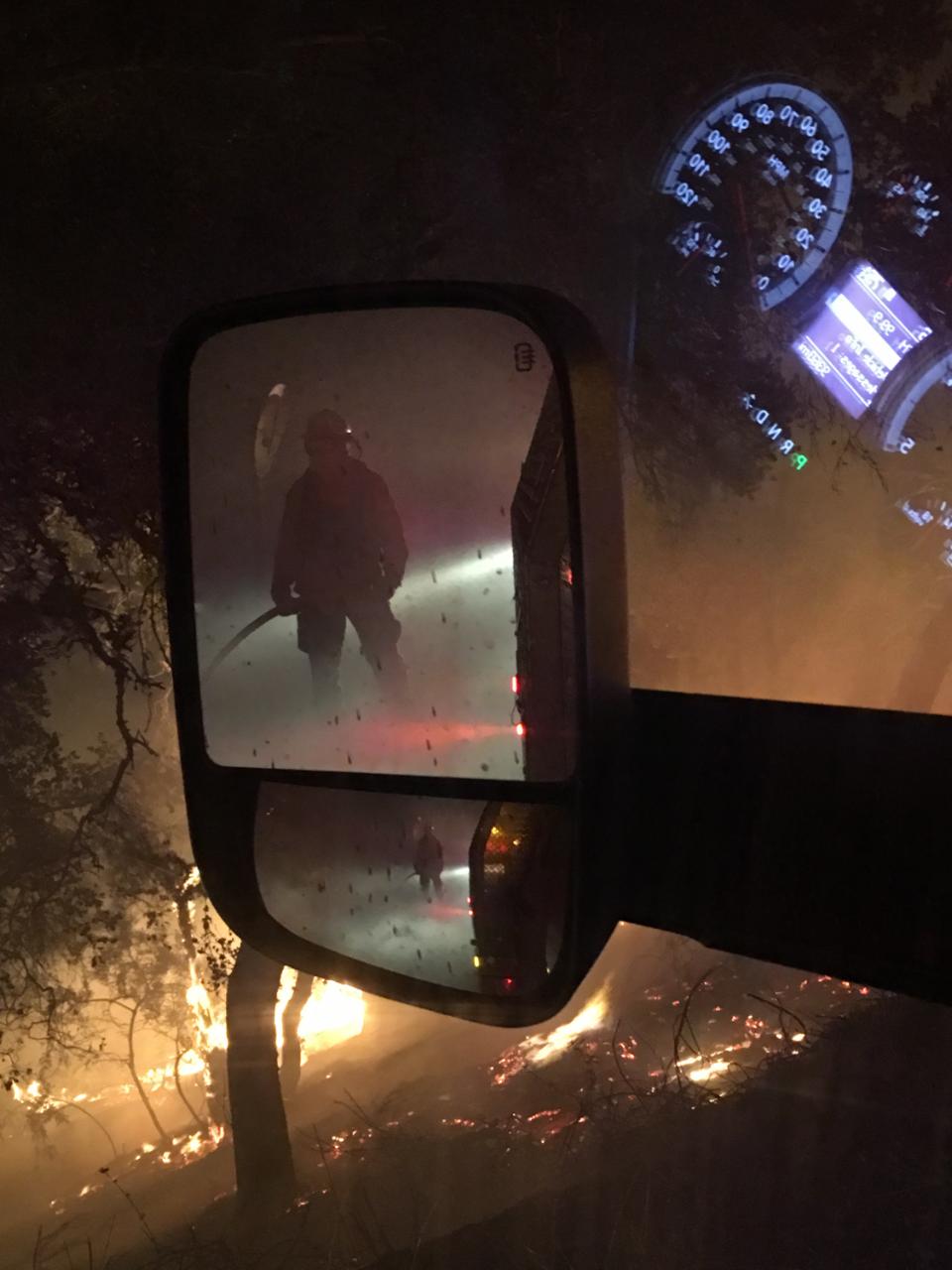 Tad Buckingham '92, OD '94 will never forget the 2017 holiday season, but that has little to do with parties or presents.

A division chief with Forest Grove Fire & Rescue and an assistant professor at Pacific University's College of Optometry, Buckingham was part of a strike team from the Portland metro area that spent much of December 2017 fighting the largest wildfire in modern California history.

The Thomas wildfire in Southern California burned more than 280,000 acres, destroyed or damaged many structures, led to forced evacuations and claimed the life of a firefighter and a civilian before it was fully contained on Jan. 12, 2018.

Buckingham, also a paramedic, learned on Dec. 5 that his team was being called up to help battle the wildfire at the request of California officials. The team — one of 15 from Oregon — hit the road that night in a convoy of light-brush rigs that are often used to protect homes. It arrived in Ventura County the following day.

Buckingham and other members of the strike team worked 24-hour shifts to protect homes threatened by the blaze and fight the fire in wilderness areas. The 24-hour shifts were followed by 24 hours of rest and preparations for the next day on the fire line.

The strike team returned to the Portland area on Dec. 21, just in time for Buckingham and other members to finish out the holiday season with their families.

"We were happy to be back for Christmas with our families, but we would have stayed longer if they needed us," he said.

A career firefighter, Buckingham began volunteering with Forest Grove Fire & Rescue when he was a student at Pacific. He accepted a full-time position in 1996.

His day job has informed his other profession, optometry. As a faculty member at the College of Optometry, Buckingham teaches students about ocular trauma, leveraging his first-hand knowledge.

He has also seen first-hand how smoke and irritants from the growing number of wildfires can affect ocular health in communities. Buckingham explored the issue in a story that appeared in the September 2016 edition of Focus, the magazine of the American Optometric Society.

At the height of the Thomas fire, more than 8,500 firefighters from around the country were mobilized to battle the blaze. On Dec. 14, the fire claimed the life of 32-year-old firefighter Cory Iverson of Cal Fire. Several days later, his pregnant widow, Ashley, spoke to a group of firefighters still battling the blaze.

"She wanted us to know that she was being taken care of and that we were to safely, but aggressively put out the fire that had taken her husband," recalled Buckingham.

There were other encounters that he won't soon forget. At base camp, for instance, Buckingham just happened to meet a firefighter from Salt Lake City whose son is a student and soccer player at Pacific. Buckingham says the man spotted the Forest Grove emblem on a fire engine and stopped to chat.

"We exchanged numbers, and he will always have a place to stay when he comes to visit his son at Pacific," Buckingham said.

Buckingham says the whole experience restored his faith in humanity.

"At a time of political and social unrest, it was refreshing to see people selflessly caring for each other," he said.

He was especially touched by the outpouring of gratitude from residents who had endured so much.

"We often protected the community of Ojai. Residents knew we were away from our families during the holidays and wanted to thank us," Buckingham recalls.

"People who had lost a lot would still offer a hug and smile, a cup of coffee or some food."