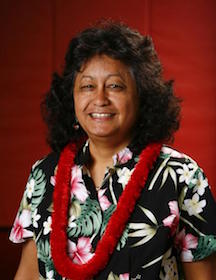 When Nā Haumāna O Hawai‘i presents its 58th annual Lu’au on Saturday, it will do so in honor of a very special alumna, mentor and friend: “Aunty” Edna Gehring (nee Doar) ’70, MSEd ’72.

As Aunty Edna prepares to retire at the end of the academic year after nearly half a century of service as an educator and mentor — including the past 35 at Pacific — this year's lu'au will mark her 36th and final one as NHOH advisor, and her 43rd overall.

Edna’s direct yet constructive communication approach, coupled with her unyielding emphasis on collaboration and courtesy, epitomizes NHOH’s ‘Ohana Everything spirit of loyalty, honor and community.

Aunty Edna’s style has both empowered and inspired thousands of students from Hawai’i to discover themselves, their passions and strengths, and areas for improvement. Pacific’s strong reputation as an outstanding college destination and mainland experience stems largely from the individual attention and guidance Aunty Edna has given each and every student regardless of background in a variety of roles she has held at Pacific.

“Aunty Edna truly defines what an aunty is,” says former NHOH member and Lu’au chair Kihei Castillo ’09, MHA ’14. “She tells us what we need to hear instead of what we want to hear, but she does so in a very loving and supportive way. She pushes us to keep going regardless of circumstance while being a big cheerleader and supporter every step of the way.”

Edna’s penchant for tough love through candor could possibly be traced to her late father Quentin, a master sergeant during World War II. Or, even perhaps, from her initial years in Oregon, which aside from NHOH at Pacific, consisted of a culture shock complete with cold winter rain among other things.

Aunty Edna recalls her initial impression of the Northwest as eye-opening. Having decided to leave the Islands for Forest Grove in 1966, site unseen with only word of mouth to rely on, she initially questioned her decision shortly after her flight touched down.

“We (she and fellow alumni from Hawai’i) talk about the ride from the Portland airport through the corn fields to campus and how we all thought, ‘What did we do? What are we doing here?’ We will all tell you that. But, we’ll also tell you we were glad we came.”

Glad, because like so many others at Pacific alumni who come from far-away places, Edna found a welcoming community full of professors who were truly invested in their students’ futures. As an undergraduate and graduate student, Edna was an active member of NHOH and met future husband Hans ’72.

The mentorship she received from her professors, including Fred Scheller, Dan and Varina French, Frank Buckiwiecz, Chuck Bafaro and Judy Sherman, and the camaraderie of fellow NHOH members made Pacific a home away from home. And it helped her realize her life’s purpose: to be just like them. Educator, mentor and friend.

Dan French ’74, longtime professor, head basketball coach and fellow alum, in particular resonated with Edna. “Dan would say, ‘Quit complaining and do something about it.’  One of my favorite quotes and one he always preached is, ‘If it is to be, it is up to me.’”

After graduating from Pacific with bachelor’s and teaching degrees (1970, 1972), Edna taught at Wahtonka High School in The Dalles for a year. She then returned to her hometown of Honolulu with Hans to work at Mililani High School for 10 years (1973-83) as a physical education teacher, mentor and career guidance counselor.

A chance to return to her alma mater and follow in the footsteps of her mentors brought Edna (and Hans) back to the northwest in 1983. Edna returned to Forest Grove as an assistant director in admissions, ironically starting her position just one day before longtime staff member and fellow alum “Uncle” Jeff Grundon ’80 joined the university’s admissions team.

All the while, she has provided watchful oversight and advice to NHOH student members while making sure the students accepted ultimate responsibility for their successes and shortcomings through careful planning and teamwork that makes everyone accountable to each other.

“Team collaboration and shared responsibility are critical to success,” she says. “But until you actually experience it on a regular basis, you won’t be able to effectively communicate, collaborate or cooperate as a team on a daily basis in the real world.” 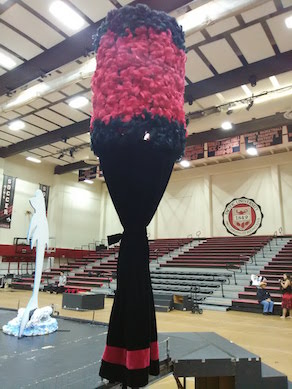 Collaboration among NHOH students, their parents and alumni over a four-month period in the fall of 2012 brought Edna her most memorable Lu’au achievement as NHOH advisor. The construction of two large kahilis, consisting of more than 28,000 feathers individually pieced together under the guidance of late master featherworker Aunty Paulette Kahalepuna, resulted in what are believed to be Oregon’s only official Hawai’ian kahilis, now a perennial fixture of the NHOH Lu’au.

Aunty Edna has been invaluable as an educator and mentor for all Pacific students, and her daily presence on campus will be greatly missed.

Her unsurpassed commitment to Pacific students will be recognized with the establishment of the Aunty Edna Endowed Scholarship Fund, which will annually award a scholarship to an NHOH undergraduate junior or senior who actively promotes the NHOH mission and participates in activities and events.

“Hans and I wanted to help and reward the haumana that continually step up to the plate and work unselfishly for the betterment of NHOH," Edna says. "We want NHOH to continue to encourage leadership skills and allow members to apply what learn and gain at Pacific to make a difference in the world."