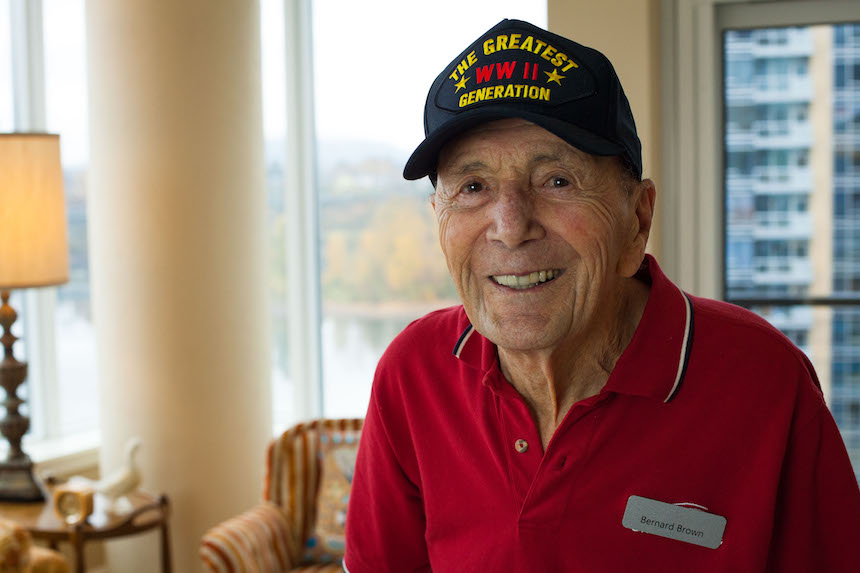 A Pacific University alumnus and World War II hero who helped rescue prisoners of Nazi Germany is giving back to his alma mater in support of fellow military veterans.

Dr. Bernard Brown ’49, OD ’50, a 94 year-old retired optometrist, widower and Portland resident, has established a scholarship with Pacific’s College of Optometry to fund tuition and other expenses for military veterans.

The Bernard & Selma Brown Optometry Scholarship for Veterans will support military veterans studying optometry — people like him, using their G.I. Bill benefits to prepare for a career in the civilian workplace.

“That profession has been so good for me and my family,” Brown told Pacific senior writer Mike Francis. “(Veterans have) taken years out of their lives to do service for this country. I just have that feeling to help those, especially those who want to go into the same profession that I’ve been in.”

Brown helped to liberate starving people who were imprisoned at the Dachau concentration camp in Germany.

After graduating from from Pacific in 1950, thanks in part his G.I. Bill benefit, he established the Salem Eye Clinic and for nearly 60 years, developed it into the thriving clinic it is today before retiring in 2007.

“Optometry really means a lot to me,” Brown said. And when I see that there are students who want to be optometrists, I want to help them anyway I can.”