Pacific University held its 2018 spring commencement exercises on Saturday at Hanson Stadium on the Forest Grove Campus. Some 325 undergraduate degree candidates received their diplomas during the morning ceremony, highlighted by an honorary degree conferral on university trustee and KISS guitarist Tommy Thayer.

Thayer, who grew up in Beaverton and graduated from Sunset High School in 1978, has served on Pacific’s Board of Trustees since 2005. He has helped the university generate more than $3.5 million for its NCAA Division III intercollegiate athletics program.

"Now I can proudly say as of today, this is officially my, and our, alma mater," Thayer told the graduates. "Go Boxers!" 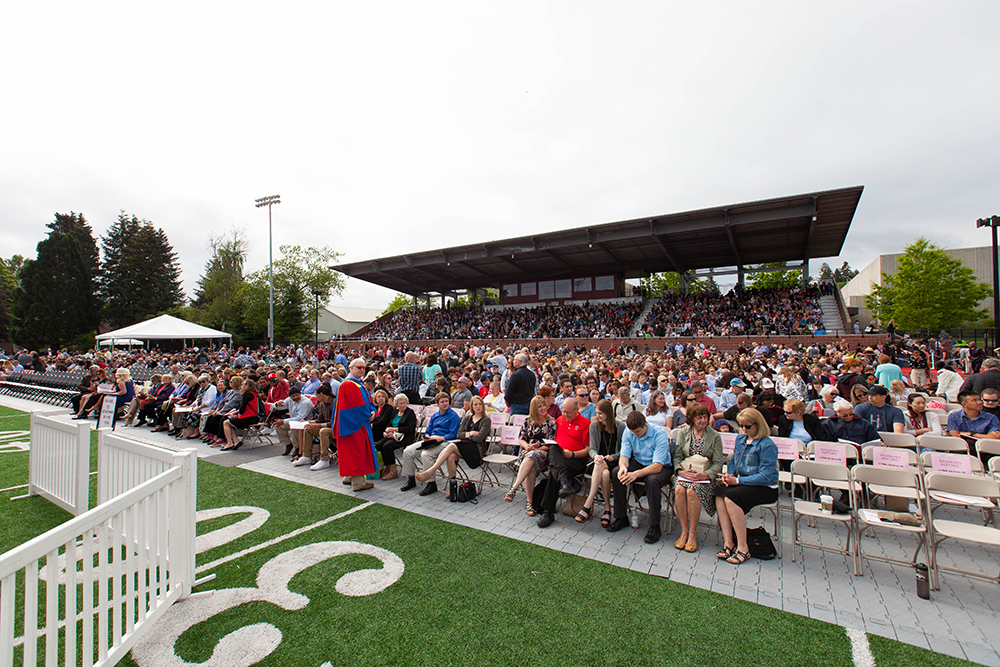 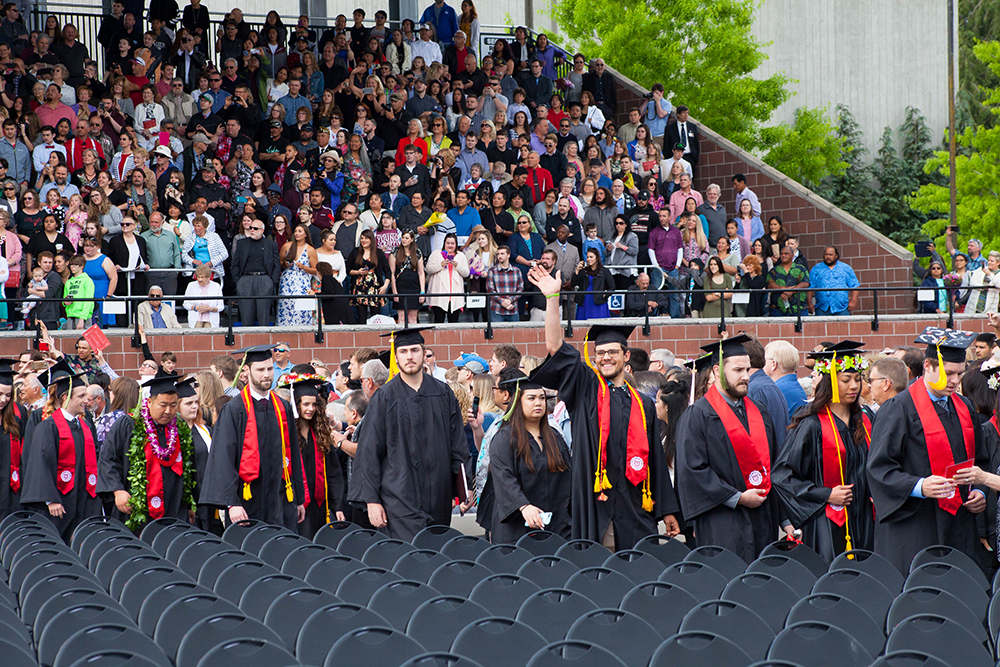 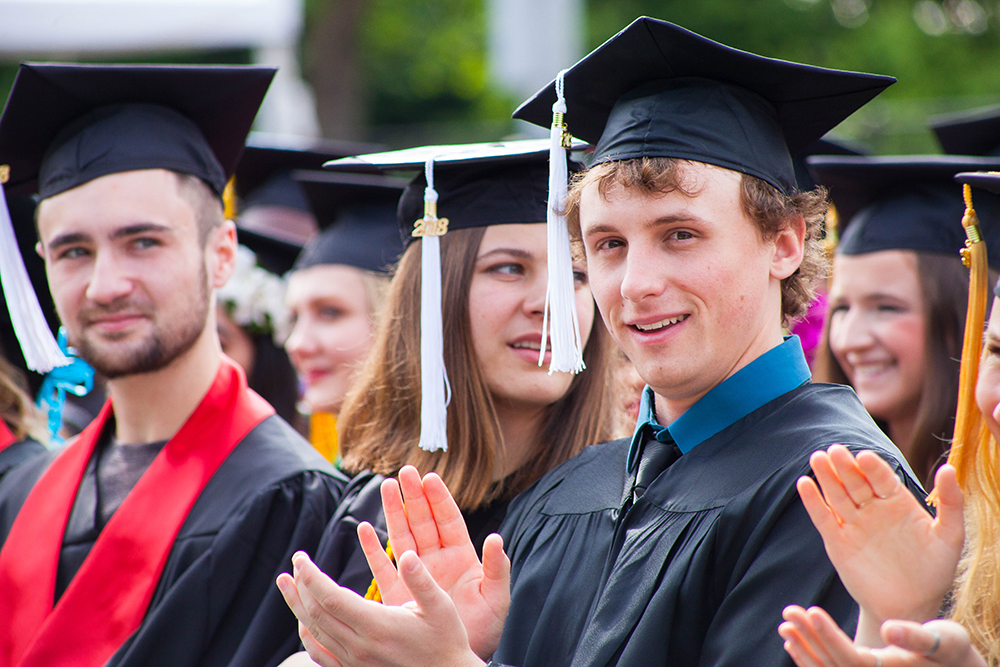 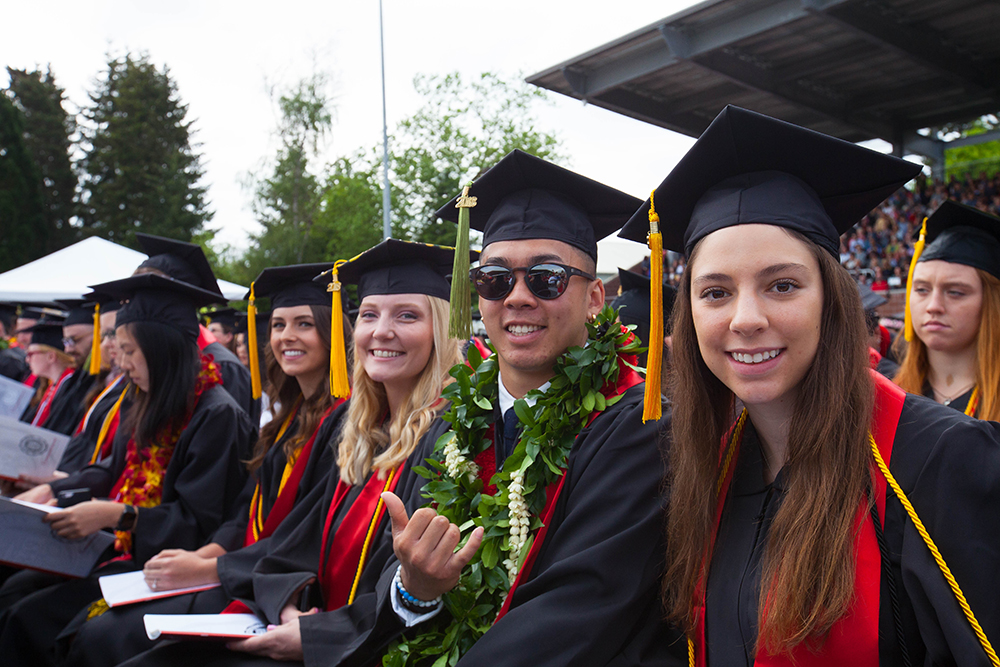 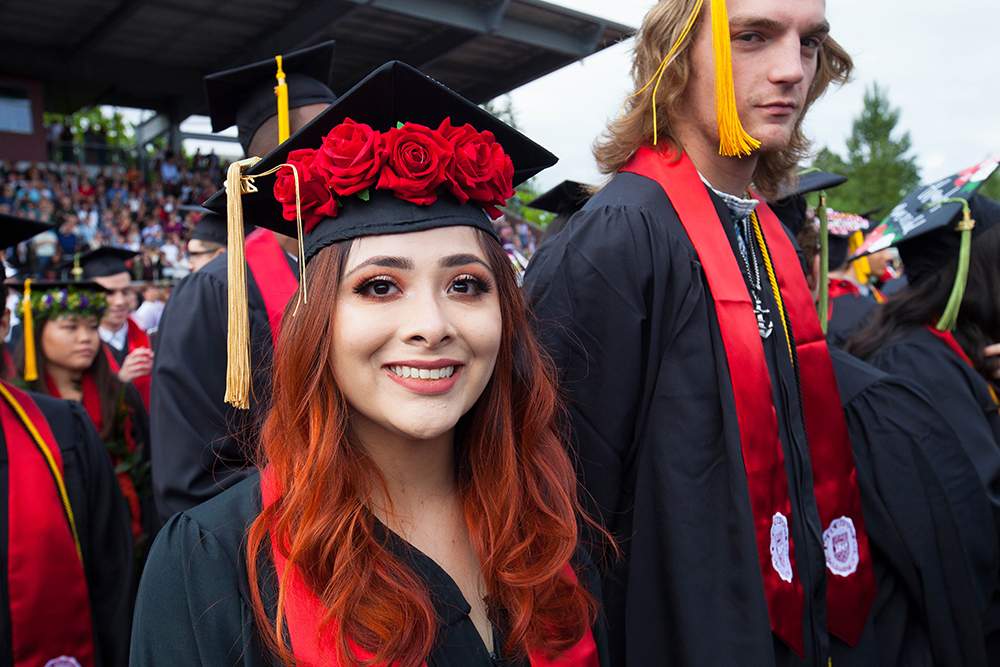 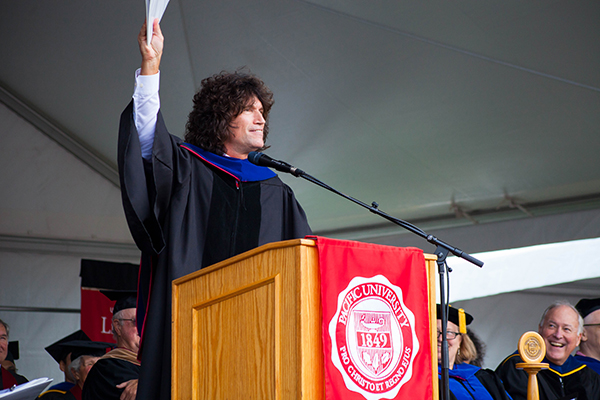 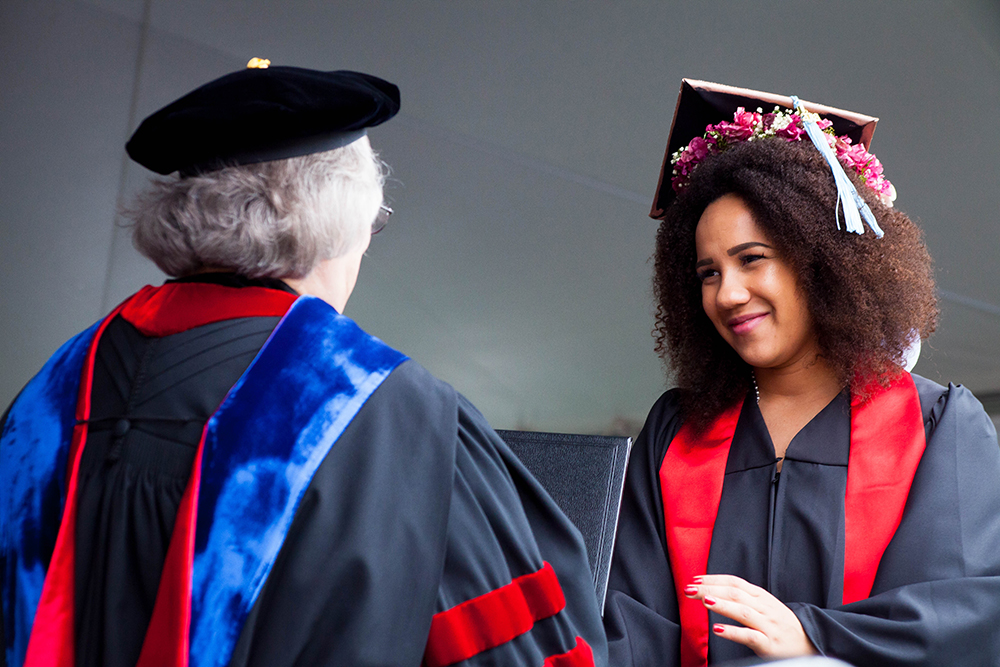 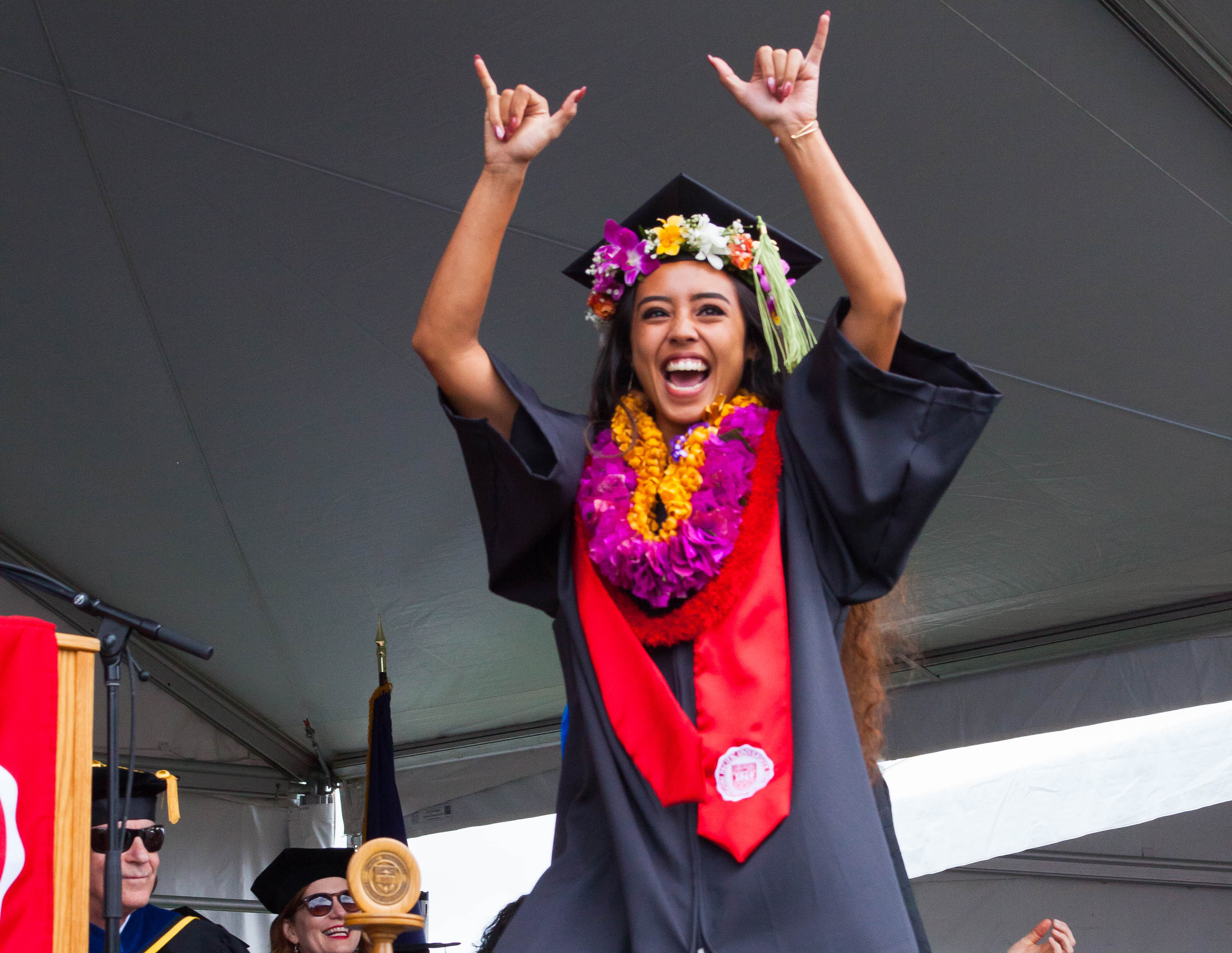 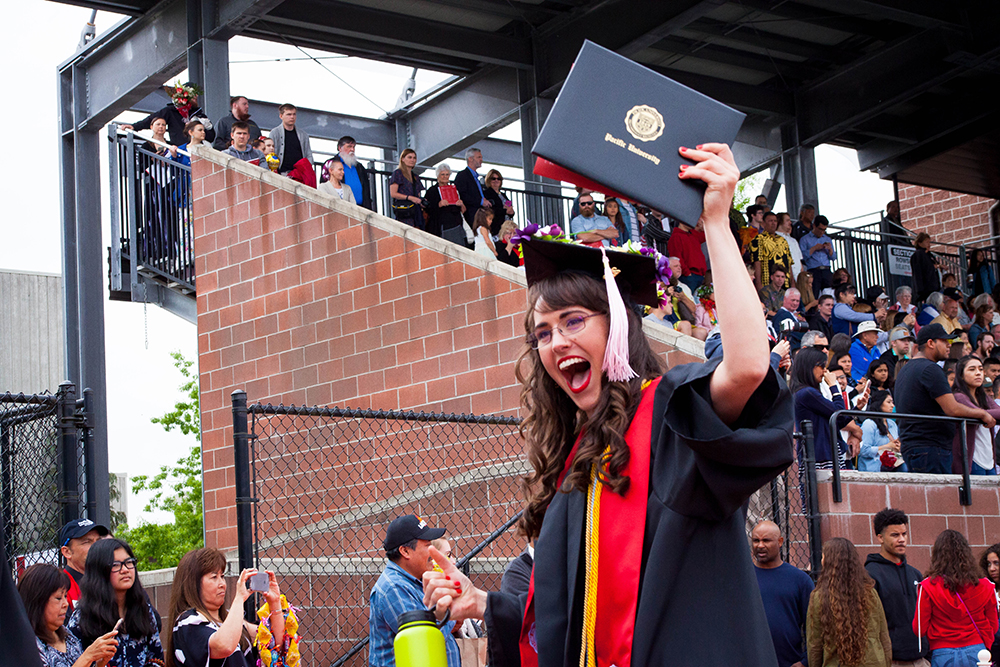 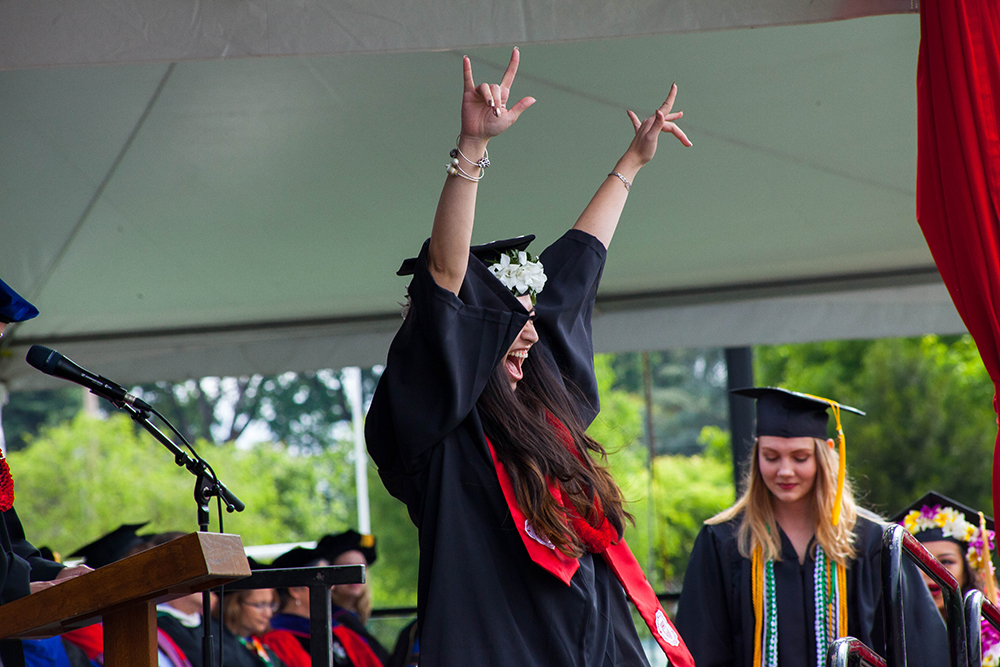 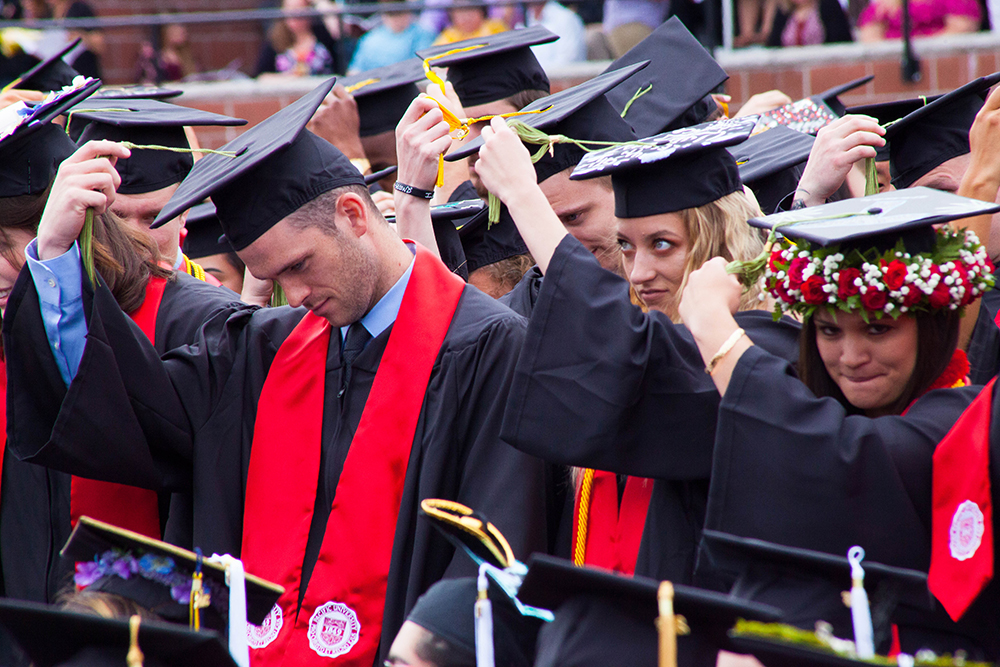 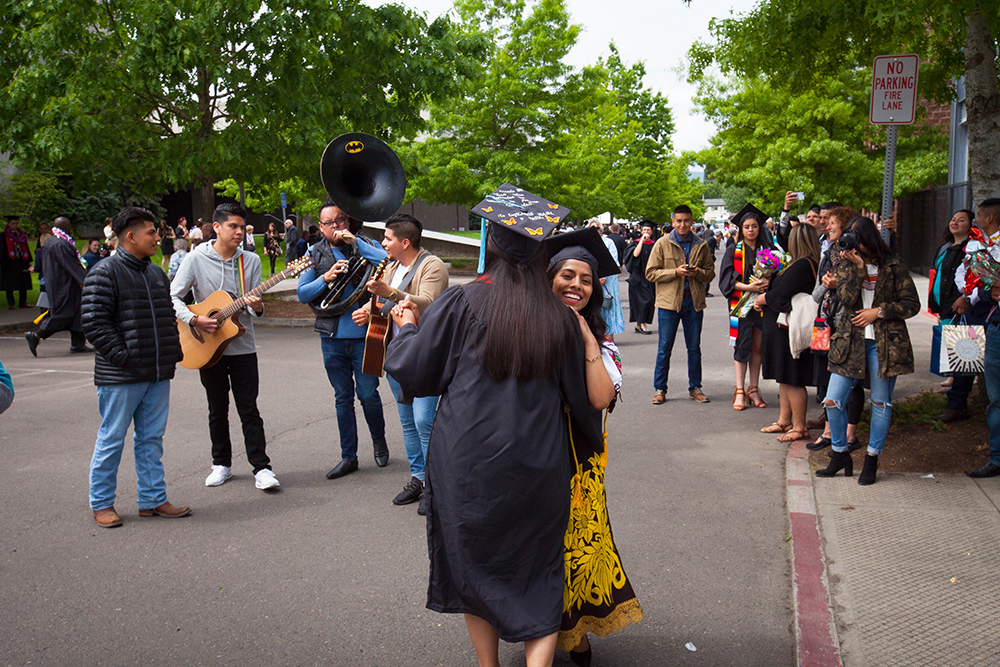 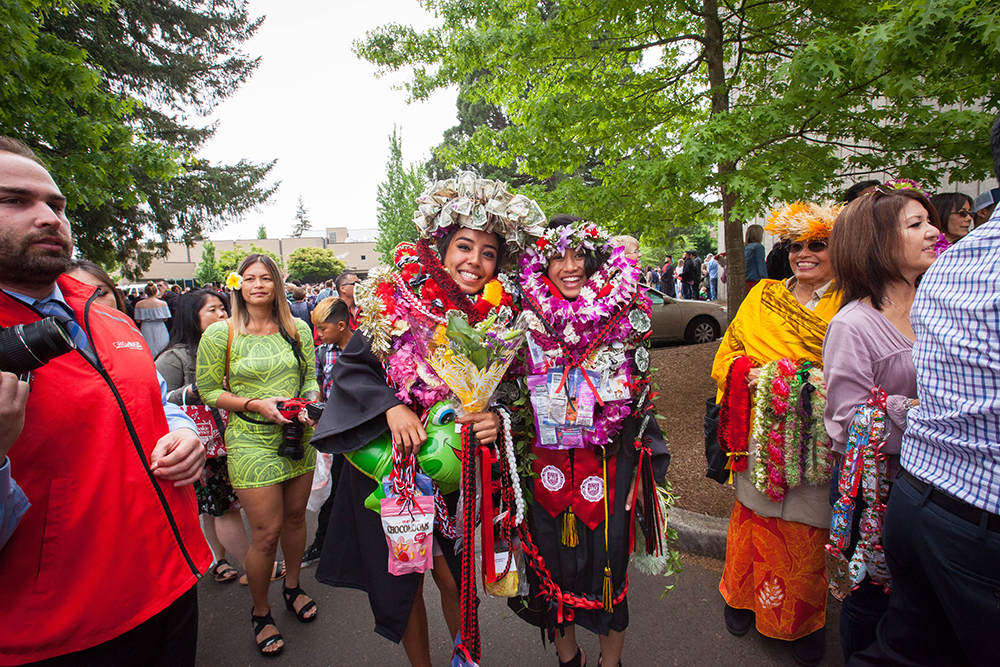 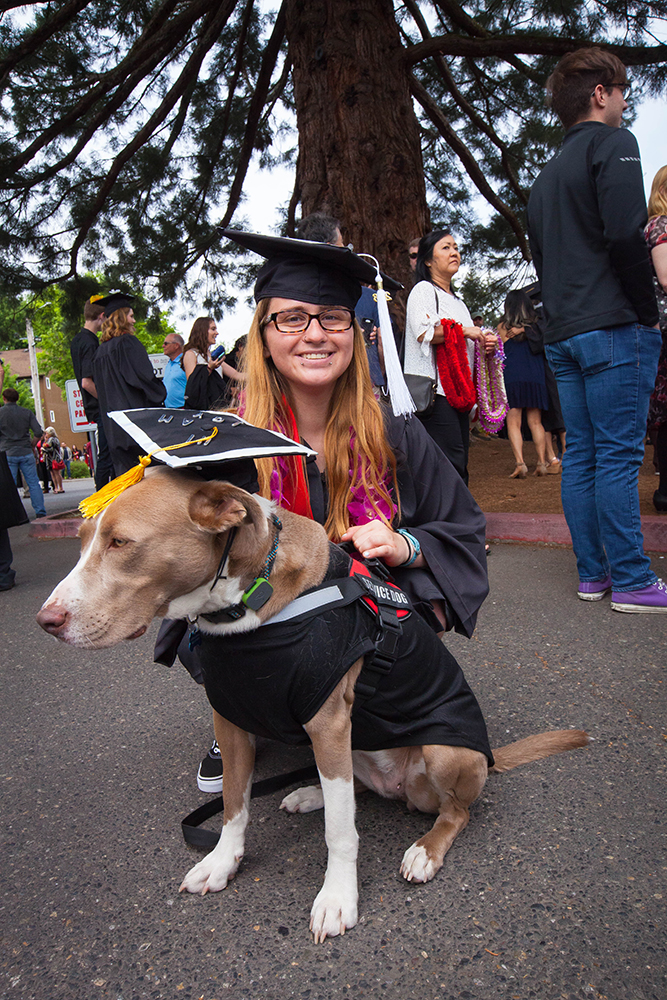 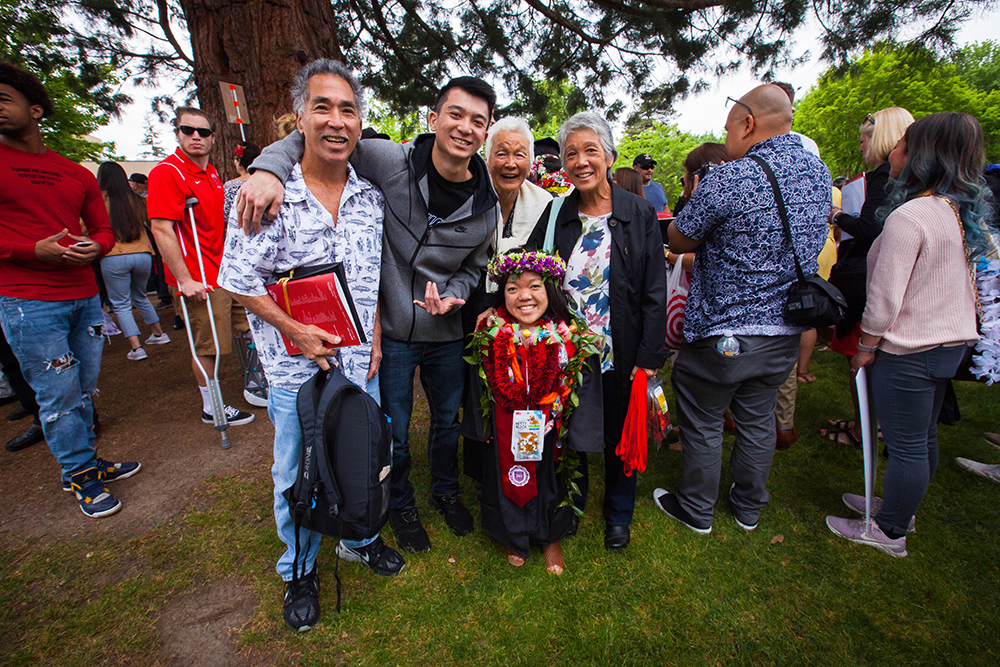 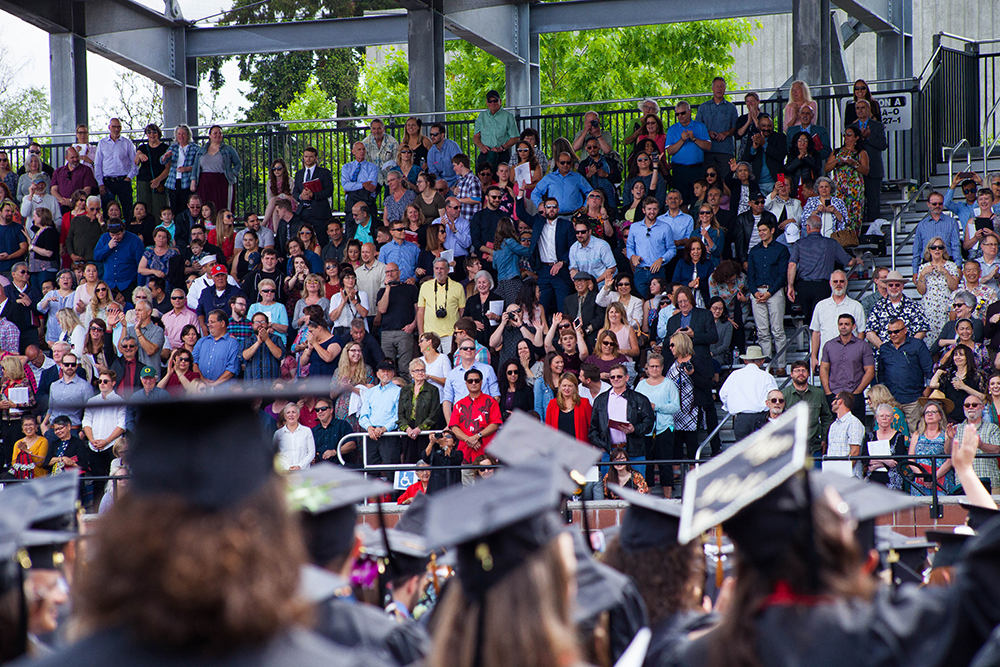 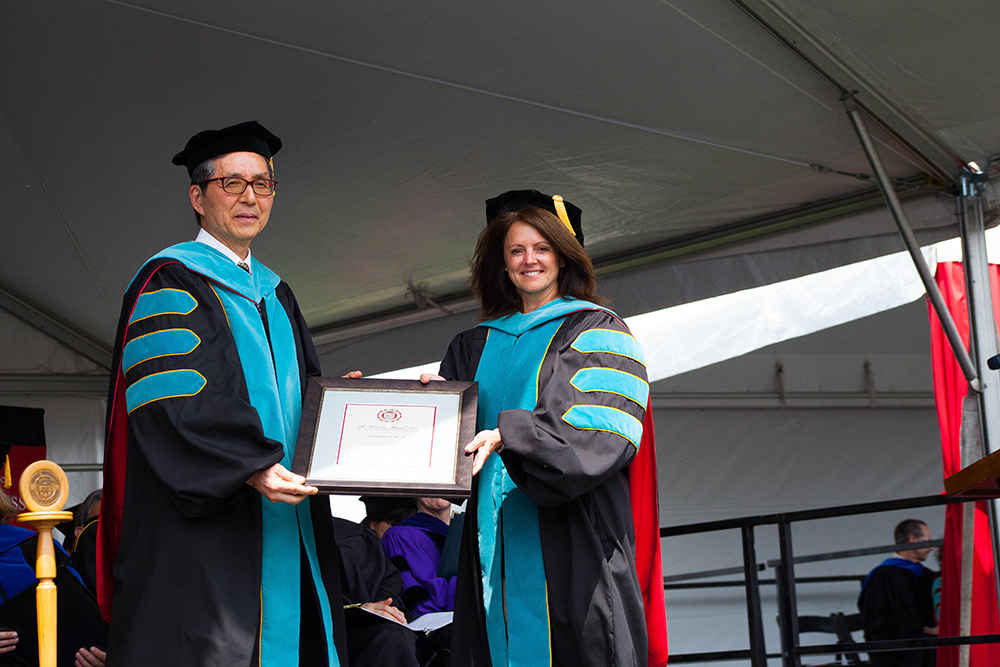 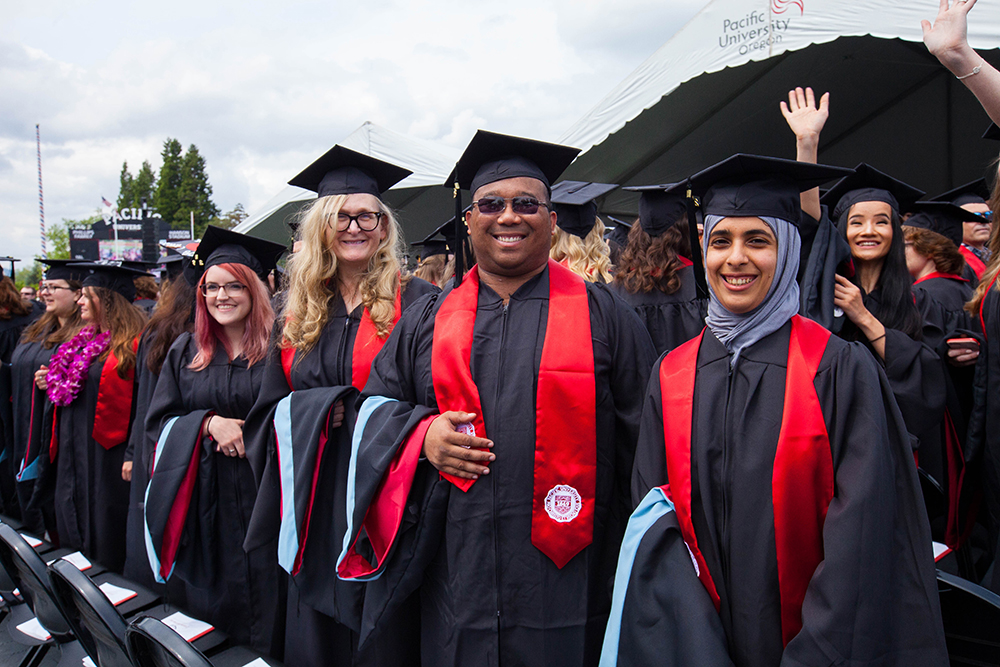 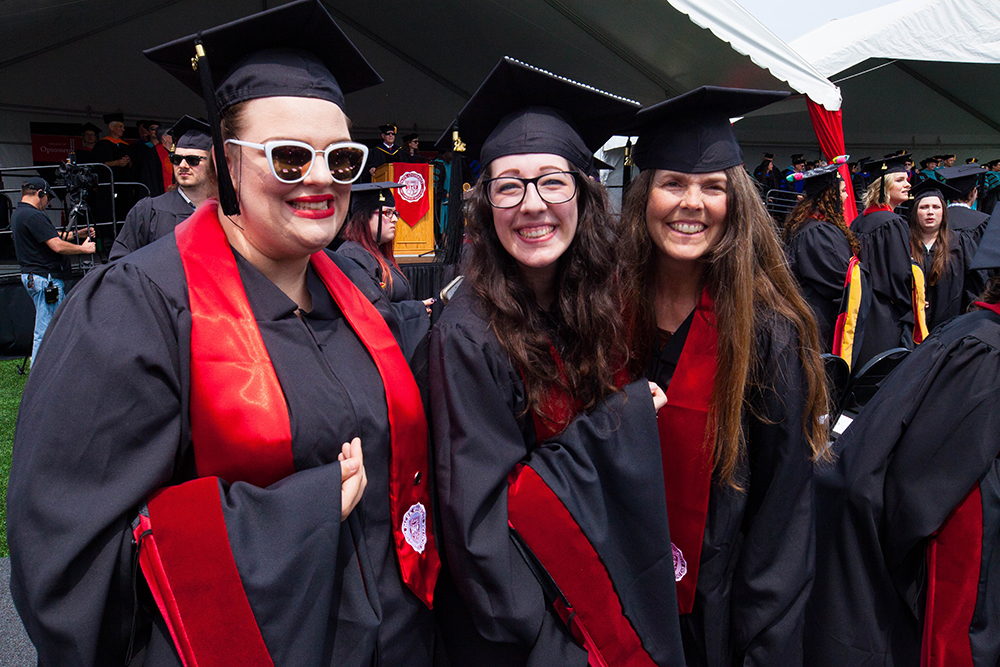 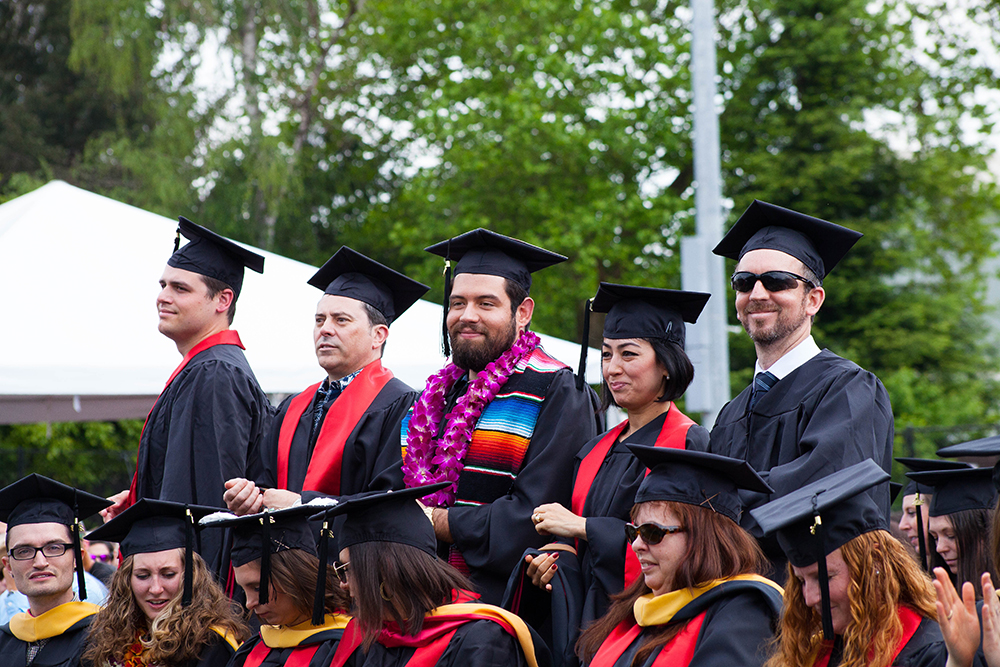 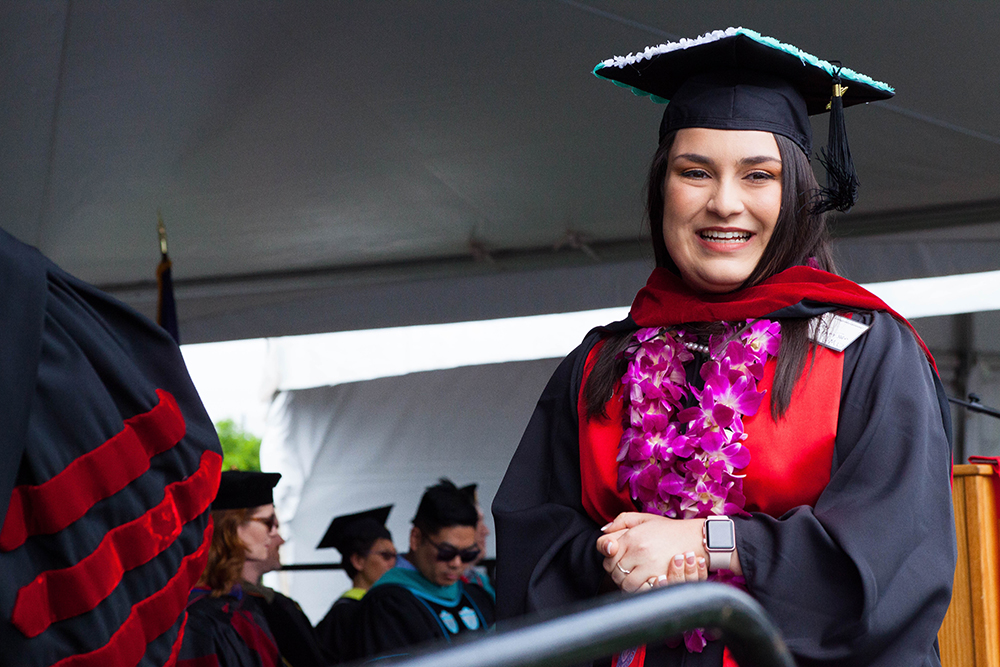 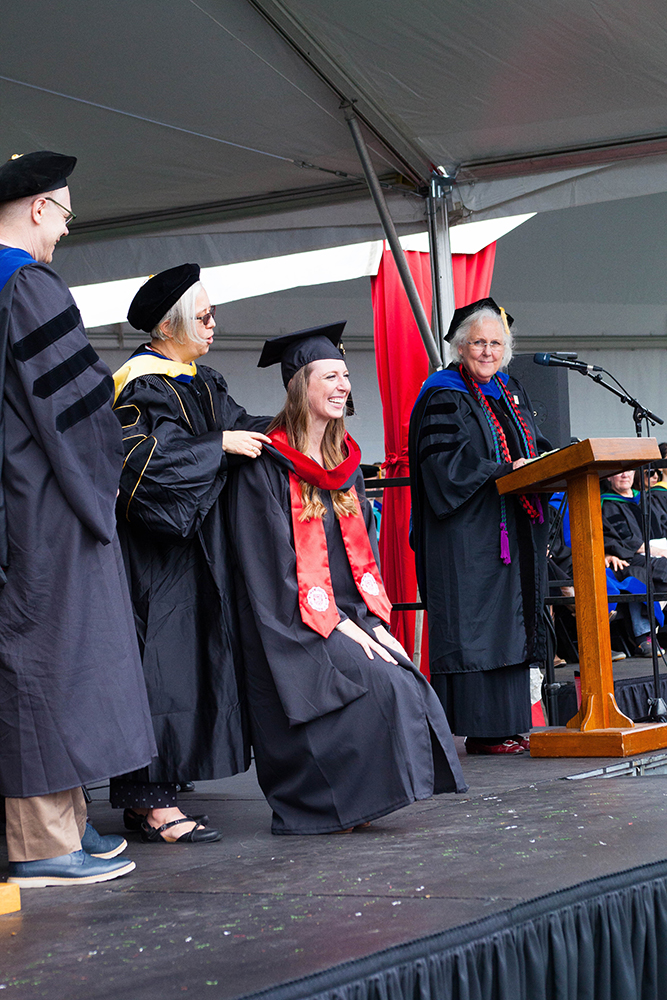 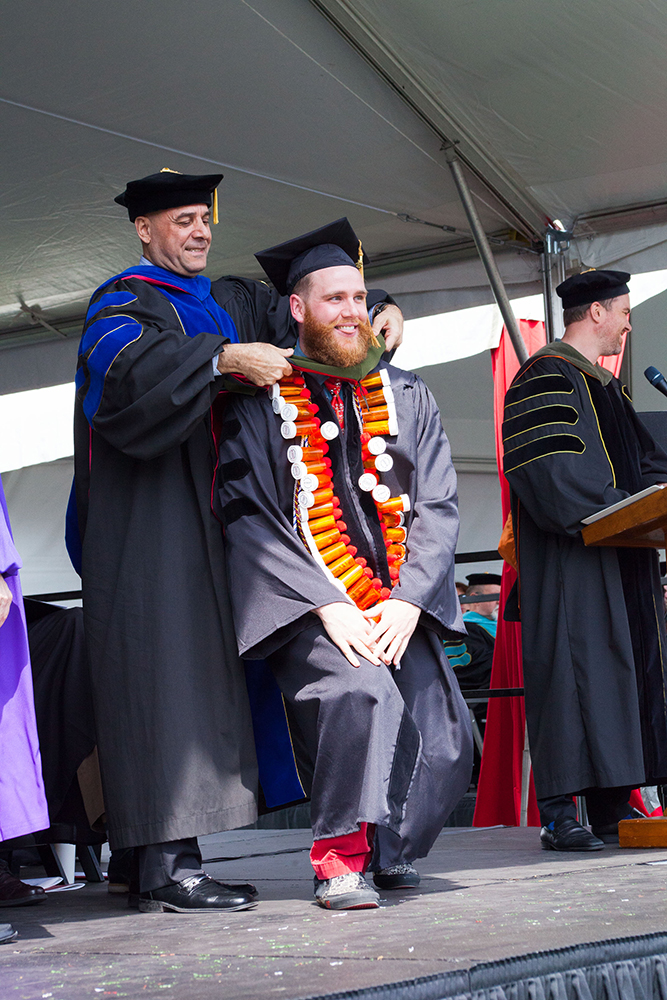 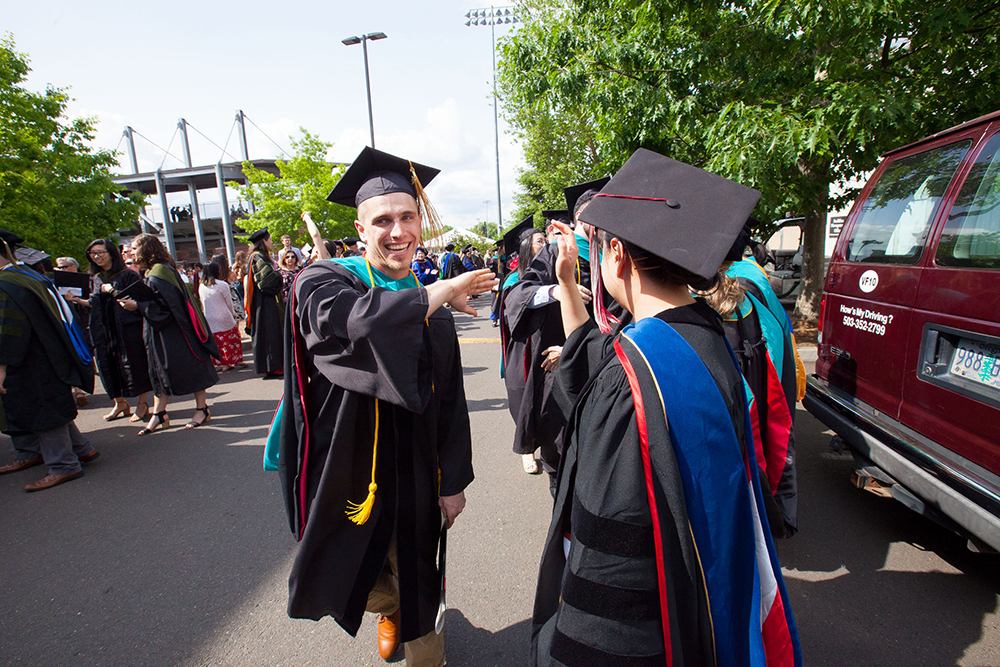 Pacific University celebrates its undergraduate and graduate commencement ceremonies on May 19, 2018, at Hanson Stadium in Forest Grove.

Thayer encouraged a simple formula for success, one that has worked for him: work hard, be on time, and never give up — and appreciate the support of friends and family.

"I've been asked a million times what is the key to success," Thayer said. "More than anything, it's perseverance. You can't let setbacks, doubt or the uncertainty of everyday life stop you from moving forward."

Thayer also reminded the graduates that none of them would be here without the support of their family members and teachers, alluding to his mother, an artist and educator; his father, 96-year-old Brigadier Gen. James B. Thayer, who receive an honorary degree from Pacific in 2009; and his high school music teacher Dell Herreid, a 1951 Pacific alumnus.

As he spoke about his journey and the support he received to pursue his dream, Thayer compared his journey to that fellow graduate Skyler Erben, who like many other Class of 2018 members, is the first from his family to go to college.

"I'm incredibly honored to share this day with each of you, and I wish you success and happiness with whatever leaps you are taking next in the near and far future," Thayer said. "If I can inspire you with my insight or advice, I feel like I've done my job. Take a moment to enjoy today. You own this, you've achieved this, and I know you are as proud of your degree as I truly am of my honor here today."

Thayer is Pacific’s first honorary degree recipient since 2015, and the Thayers became the second members from a same family to hold honorary degrees.

Prior to the presentation of degrees, the College of Optometry awarded its annual Kamelia Massih Prize for a Distinguished Optometrist to Dr. Shinji Seki ’77, OD ’79.

The Massih Prize is annually bestowed upon a Pacific University optometry alumnus or alumna who has made a significant impact on the profession. It was established by the family of the late Dr. Kamelia Massih, a 1985 optometry alumna who dedicated her life to helping others before passing away from cancer in 2010.

Seki expressed gratitude and humility in accepting the honor.

“The profession of optometry is still developing in Japan,” he said. “Even though optical goods and optometric instruments are still well advanced, the profession is still developing, albeit very quickly in the Asia-Pacific region, where half of the world’s population lives, especially in China and India. As a cancer patient myself, I hope to contribute my optometry knowledge to the training and development in honor of Dr. Massih, whose dedicated work ended much too early from this disease (cancer)."