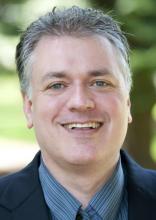 The Rev. Dr. Chuck Currie, director of the Center for Peace and Spirituality, university chaplain and assistant professor of religious studies at Pacific University, will attend President Obama's "Farewell Address" in Chicago on Tuesday, January 10.

Dr. Currie, a minister in the United Church of Christ and former member of the board of the National Coalition for the Homeless, first worked with then-Senator Obama's office in 2007 as the senator undertook an effort to reduce homelessness among veterans. The two met later that year and Currie served as a surrogate for Obama for America during the 2007-2008 campaign cycle and again in 2012.

"I'm thankful for the invitation and opportunity to be in Chicago next Tuesday to hear President Obama's 'Farewell Address.' I was fortunate to play a small role in Obama for America back when Senator Obama was 30 points behind in the polls. Over the last eight years it has been my honor in joining him in Portland and Washington for events both big and small.  Most importantly, The White House has kindly allowed me the opportunity to weigh in on policy matters these last eight years," said Dr. Currie. "Personally, joining President Obama with a small group of faith leaders in the Blue Room to celebrate the first open enrollment under Obamacare will forever be a highlight of my life. So many faith leaders leaders worked so very hard to get Obamacare passed. Our work helped heal the sick. Now we have an obligation to protect the health of those 30 million Americans who gained coverage after the Affordable Care Act was passed."

Dr. Currie was last with President Obama in April for the White House Easter Breakfast. At the invitation of the president, Dr. Currie has also attended events such as the Inaugural Prayer Service at the Washington National Cathedral and the arrival ceremony for Pope Francis at The White House in 2015.

"What I learn in policy briefings and working with senior White House staff translates right back into my classroom teaching and events put on by the Center for Peace and Spirituality at Pacific," said Dr. Currie.  "This winter, for example, I'm teaching a course on Religion and Social Health Policy where we look at the different ways religious groups attempt to influence public health. Having had a front row seat for the debate over the Affordable Care Act, I can offer to students diverse perspectives from faith traditions on how health care in America should be delivered - regardless of whatever my own personal views might be."

Pacific University’s Center for Peace and Spirituality provides students with the opportunity to engage in meaningful study, reflection and action based on the recognition that inter- and intra-personal peace are inherently connected and that concerns for personal spirituality are intimately related to concerns for one's social, historical, cultural and natural environment.