Pacific University Welcomes Five New Members to Board of Trustees

The Pacific University Board of Trustees recently welcomed five new members to serve on the university's chief governing body.

The board elected Julia Brim-Edwards, Sheri Garboden ’76 and Norman Scott ’63 at its meeting in March, and College of Optometry professor Graham Erickson OD and graduate student Katie Ohene (Clinical Psychology) at its meeting in May. All began their terms on July 1. 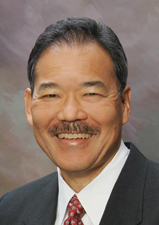 Additionally, the Board of Trustees elected longtime member Gerald Yoshida ’73 to serve as the new chair. Yoshida is a shareholder, director and officer of Char Hamilton Yoshida & Shimomoto legal firm in Honolulu, Hawai'i. He succeeds Mindy Cameron ’65, who served in the role since 2009 and remains a board member.

Garboden spent many years overseeing human resources as a talent acquisition partner at Flir Systems in Wilsonville prior to her retirement.

Scott is a retired US Navy captain who also spent time in the defense industry and later owned and operated a resort. He and his wife Cheryl reside in Spokane, Wash.

The Board of Trustees has the ultimate responsibility for the management and welfare of Pacific University under the charter granted by the State of Oregon.