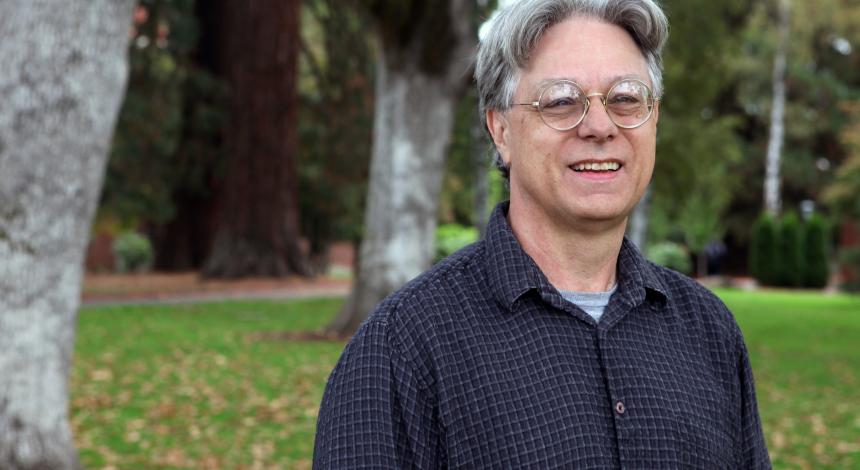 Two cannibals are eating a clown for dinner.

One cannibal says to the other, “Does this taste funny to you?”

Two hunters are in the woods, when one falls to the ground, apparently dead. The second hunter calls 911.

“Hold on,” says the hunter.

The jokes got better—really—as Dave Boersema, professor of philosophy, presented The Philosophy of Humor during the latest installment of Pacific University Boxer (PUB) Night.

PUB Nights are sponsored by the Office of Alumni Relations and invite a Pacific professor to offer a casual and entertaining 101-level lecture to alumni and guests as they enjoy food and libations. The previous PUB Night, in February, featured Jim Moore discussing the upcoming presidential election over beers at the Widmer Gasthaus Pub in Portland.

On Friday evening, nearly 100 people gathered at David Hill Winery in Forest Grove to hear Boersema. Beneath an outdoor wedding tent, the crowd ignored the soft rain, sipping from a selection of beer and wine, enjoying a dinner of chicken, rustic bread and spiced vegetables, and pretty much laughing themselves to the floor.

Using a selection of jokes, from the predictable openers above to the famous Abbott and Costello sketch Who’s on First?, Boersema gave a casual overview of philosophy. He used jokes to illustrate the difference between metaphysical, epistemological and axiological approaches to philosophy—categories that, on more serious subjects, help us as humans explore our understanding of the world and our values.

Freud would say anything that provides relief in a tense situation is funny.

Aristotle might say it’s all about superiority, about the listener enjoying a joke because they “get it” while a character does not.

On his first day at a new job, the boss tells a man to sweep the floor.

“If it had been a Pacific grad, that wouldn’t have been funny,” he said.

“That would have just been dumb.”