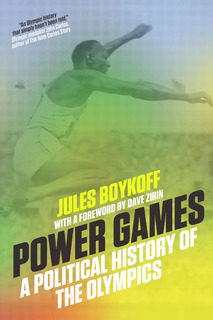 Verso Books has published the latest book by Pacific University Politics & Government professor Jules Boykoff, a critically acclaimed scholar in the areas of international sport and its social implications.

Now available in bookstores and online, Power Games: A Political History of the Olympics chronicles the modern games, their checkered political history and corresponding impact on both a global and local scale.

Boykoff has authored two previous books on the subject: Activism and the Olympics: Dissent at the Games in Vancouver and London (2014 - Rutgers University Press) and Celebration Capitalism and the Olympic Games (2013 - Routledge).

As a Fulbright scholar, Boykoff spent last fall in Brazil conducting research during the country’s preparation for the upcoming Olympics. He will return to Rio de Janeiro this summer to document the political and social sights and sounds as he did at recent games in London and Vancouver.