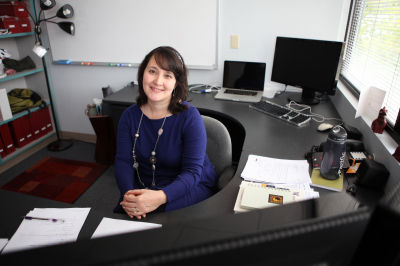 Shereen Khoja is a teacher with a mission: to encourage more women to join the computer science field.

The associate professor of computer science points to dismal statistics, noting that the number of women earning degrees in the field actually is decreasing, from 1984, when 37 percent of bachelor degrees in computer science went to women, to the latest figures of just 18 percent in 2009.

“I notice it, of course, in my classrooms,” she says. “I have a lot of male students.”

Part of the problem, she notes, has been an image issue of “the computer guy, the techie, the nerd, a very clear stereotype, and it’s hard for girls to identify with that.”

That stereotype is a far cry from Khoja’s experience as a computer science major when she earned a bachelor’s degree from King Abdu Aziz University in Saudi Arabia.  A product of an educational system that separated the females from the males often all the way through college, Khoja said she didn’t feel any qualms about majoring in computer science. With her fellow women students, she said, “We’d write code for a bit, then we’d talk about movie stars or do our hair and makeup—they weren’t mutually exclusive.”

Born in the United Kingdom of a Saudi father and a British mother, Khoja moved with her family to Saudi Arabia at age 2, when her father, who had gone to England for training with the Saudi air force, become employed by Saudi Airlines. So, until she started school, Khoja spent her early childhood six months in her father’s country, then six months in the U.K.

In contrast to many of the stereotypes Americans may have about Saudi Arabia and women, Khoja said, “Growing up there was great…we were right on the Red Sea, so we did a lot of swimming, a lot being out in the sunshine, running along the beach.

“It was only when I became a teenager that I…started to realize that there was a difference between the two countries.”

However, she said, her Saudi family was very multicultured, with an aunt married to an Egyptian, an uncle married to a woman from Sri Lanka, and many of the families she encountered as a small child were of mixed nationalities: “A lot of Saudi men married to British, American, Irish women…I have a ton of ‘aunties’ from all over the world,” she said.

Also, she noted, women do wear Western clothes in the home but are still required to wear the Abaya—the black full-length cloak that covers the female figure plus a the headpiece—when venturing outside the home.

“Other than that, growing up we could wear whatever we wanted in the house or visiting other people…It didn’t feel weird,” she said.

After her bachelor’s degree, Khoja went to England for a master’s degree at the University of Essex with a focus on artificial intelligence, then earned a doctorate in the natural language processing field at Lancaster University, also in the U.K.

She began applying to around 60 different American, Australian and New Zealand colleges in August of 2001 while working on her Ph.D.

Out of that multitude of applications, Pacific University chose to do a phone interview with her, then flew her over for more interviews.

“We just had a great rapport,” she said. “I love Pacific and the Northwest, because I felt they were a nice combination of the U.K. and Saudi Arabia.”

Khoja came to Pacific with a job in 2002, two suitcases (“all the luggage I had”) and lived in a residence hall for two weeks before finding an apartment. Now she lives in a house with her husband, Adam, and 2-year-old daughter, Layla.

Khoja says she loves teaching, and her main research has been focused on the Girls Gather for Computer Science camps for junior high school girls in the tri-county area, which is being funded by a $554,248 grant awarded by the National Science Foundation.

The first camp took place last summer with 30 girls in attendance. The goal of the three-year grant-funded project is to provide the young women with both skills and appreciation of computer science. They will be invited to participate in follow-up activities and their progress monitored over a 10-year period by Pacific’s computer science faculty.