A Slice of the Healthcare [Pizza] Pie 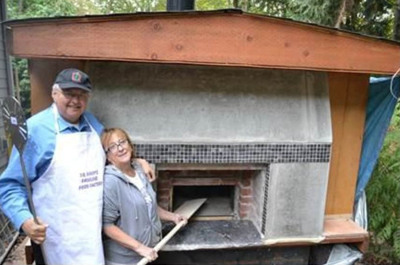 John R. Hayes is listed in the university’s directory as an associate professor of optometry. But if you were to ask him what he does, he’d reply, “promoting the advancement of health and human services.”

That promotion includes not only teaching, consultations and research, but hobbies, such as developing nutrient-dense recipes for the traveling brick oven he built himself.

Hayes, originally from Ohio, joined the optometry faculty five years ago, after many years at Ohio State University and a 10-year stint as a senior research consulting statistician at Nationwide Children’s Hospital in Columbus, Ohio. He holds a bachelor’s degree in psychology from College of Wooster, plus a master’s degree in cognitive psychology and a PhD in preventive medicine, both from Ohio State.

“My primary job is providing research design consultation and statistical analysis,” he said. “I help people think about what their hypotheses are, design their studies, analyze their data and present their results.”

His work at Pacific actually crosses over several departments. He teaches research design, statistics, public health and evidence-based optometry courses in the College of Optometry. He also works with the Vision Performance Institute on the Forest Grove campus and with faculty needing support.

He conducts independent research, having received grants for studies on macular degeneration and diabetes. He also is involved in the master of health administration program, based at the Hillsboro campus.

Coming to Pacific and being involved in a variety of programs is a real plus, Hayes said.

”I really enjoy Pacific because I can actually get into the science and develop ideas on my own, so that’s been very fun,” he said.

“At the children’s hospital (in Ohio), there were millions of dollars’ worth of research being done, and there was me, the statistician, and it was pretty much heads down, morning-to-night data crunching, and I really wasn’t able to get that involved with the science.

“Here, I’ve been able to take advantage of some of my early career psychology learning,” he said. “The work with 3D, and ergonomics and reading is related to the psychology work I had in the ’70s.”

Hayes’ interest in science dates back to his childhood in Ohio.

“My dad was a chemist at Firestone. He was one of the early developers of plastics and holds many patents. I would go to his lab on Saturday mornings and watch him stir the various pots he was cooking,” he said.

His work on diabetic research is personal: He has a daughter with diabetes and when he was working on his own as a consultant in Ohio, he found himself unable to purchase health insurance because of his daughter’s disease.

“It was pretty bad,” he said. “I’m an advocate for the new health insurance plan because of personal experience with the impossibility of getting health insurance when you are an individual family. The need for health insurance can define the opportunities you can pursue for a career.”

Then there’s the wood-fired pizza/bread-making oven Hayes built on a trailer. It’s not only a hobby, but something he views as a way to offer healthy food. Weighing about 8,000 pounds with a baking temperature that goes to 1,000 degrees Fahrenheit, the oven bakes a “very nice pizza” in about 90 seconds, Hayes said. His goal in building it was to operate it at a variety of events so people would be able to have a nutrient-dense alternative to typical fair food. Hayes has used the oven for a benefit for Amigos, the optometry students’ service club that works to provide vision care to people in third-world countries.