The National Institute for the Study of Transfer Students has named Pacific University's Denise Price-Giesbers '00 among its inaugural winners of the Bonita C. Jacobs Transfer Champions Award.

The award recognizes individuals who have demonstrated exceptional advocacy and leadership in the development and implementation of transfer-focused activities that have made a significant contribution to the improvement of transfer student access, persistence and success.

Price-Giesbers, director of the Office of Transfer Student Services, Pacific Information Center and New Student Orientation, joined four other honorees in Atlanta on Feb. 6 to receive the award during the institute's Transfer Champions Luncheon.

Price-Giesbers came to Pacific as a transfer student herself, and experienced what she calls "transfer shock." First as an undergraduate student, and now as a staff member, she advocates for both transfer and non-traditional students, including military veterans and those returning to school after a prolonged period away from the classroom.

A staff member since 1999, Price-Giesbers has championed support services for transfer students by developing a multitude of resources for them and their families, including orientation programs, student housing, bereavement support, peer mentor programs, study plans and academic advising.

Under Price-Giesbers' leadership, the Office of Transfer Student Services has provided individual support to more than 300 students and developed into a full-service center. A lounge for transfer students to collaborate and study in, and an orientation program customized to meet their specific needs are just two of the office's key products that Price-Giesbers brought to fruition.

"I believe that my success as an administrator is based on the success and growth of my students," she said.

The transfer student population at Pacific's Forest Grove Campus has grown substantially in recent years, with a 34 percent jump in the number of transfers since 2009. Of the university's 549 new undergraduate students this year, a record 23.3 percent of them are transfers from another college or university. Pacific's current undergraduate enrollment of 1,713 at the Forest Grove Campus includes 270 transfer students. What's more, retention of transfer students at Pacific has exceeded 82 percent each year for the past decade with a high mark of 97.4 percent.

Psychology professor Alyson Burns-Glover, who nominated Price-Giesbers for the award, attributes the successful retention of the transfer segment to Price-Giesbers' efforts.

"Denise's list of accomplishments is a testament to the adage, 'If you build it, they will come,'" Burns-Glover said. "Denise built our transfer program."

In 2006, at the request of former president Phil Creighton and in alignment with a newly adopted strategic plan, Price-Giesbers established the Office of Transfer Student Services. The first of its kind in Oregon, the office assists all transfer students in their successful transition to Pacific and their academic progress at the university.

"When I began at Pacific in 2003, enrollment was declining, retention rates were significantly below our peers and attention to and support of our transfer students were minimal at best," Creighton said. "I personally witnessed the transformation of the transfer program under Denise's leadership."

Burns-Glover said Price-Giesbers embodies the award as a champion of transfer students. "Denise advocates without regard to personal aggrandizement and with an authenticity that elicits a level of passion and commitment from students that others cannot."

Jan Nerenberg '09, currently a PhD candidate at Aberystwyth University in Wales, is one of many Pacific alumni who credits Price-Giesbers for her success.

"I will never forget opening my apartment door to find Denise with her welcoming smile and a comforting bouquet of flowers just after my mother passed away," Nerenberg said. "She is one of the building blocks in my scholastic foundation."

In 2011, Pacific University honored Price-Giesbers with the Dedication to Students Award. "It is a rare individual that is able to transform culture," Creighton said. "Denise is such a person."

Founded by Bonita C. Jacobs in 2002 and currently based at the University of North Georgia, the National Institute for the Study of Transfer Students conducts, promotes, and disseminates disciplined inquiries to inform and improve transfer policy and practice. 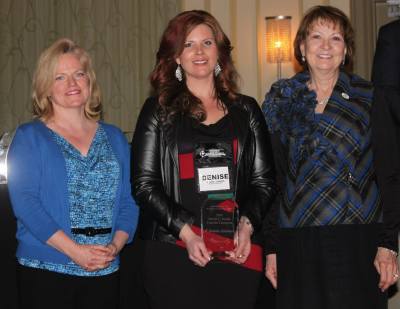