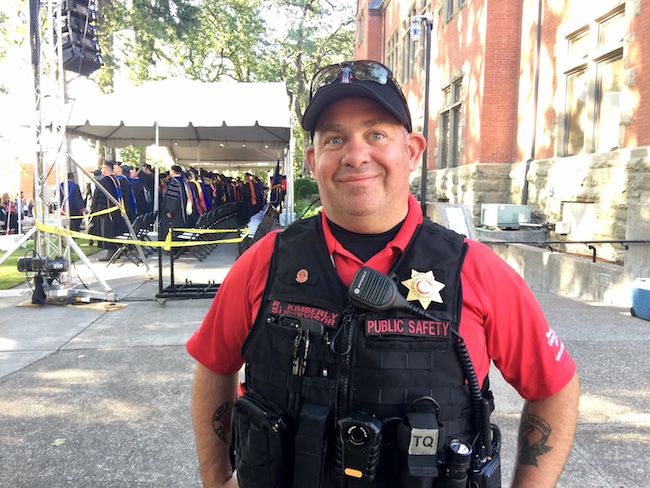 Ryan Kimberly is spending the first Monday of classes in the Campus Public Safety house on College Way, making Boxer ID cards for newly arrived freshmen and for graduate students on the Eugene Campus. As the card machine hums, he has an eye on an oversized display screen that shows the images displayed by dozens of campus cams.

For the moment, he is deskbound, but at other times, he roams around the Forest Grove Campus with other CPS officers, making sure the campus is running smoothly. You may see them in golf carts, in residence halls and other buildings, and at public events, such as Convocation.

He and his colleagues may be the most important people at Pacific University to know, especially for those adjusting to life on a new campus. Put their number in your mobile phone: 503-352-2230 in Forest Grove; 503-352-7207 in Hillsboro. And don’t hesitate to use it when you have a concern.

Calls to Public Safety tend to jump for the first month of school, Kimberly said. Many of the calls are related to alcohol, as students embrace the relative freedom of campus life, some for the first time.

“There’s a bit of an adjustment period,” he said.

Public Safety officers jump-start cars, escort students around campus, respond to calls and provide a presence at campus gatherings. They are akin to a university police force in that they usually are the first responders to campus calls, but they are not armed and have no police powers. They cooperate regularly with local police departments.

The situation is similar on the Hillsboro Campus, said Officer Brad Kirschner. But because the campus is not residential, the types of safety incidents are different. Kirschner said he advises students to be aware of their surroundings both indoors and when they're walking to and from their cars or to public transportation. If a student sees someone who looks out of place, Kirschner asks them to give Public Safety a call.

Every student enrolled at Pacific is signed up to receive Boxer Alerts, which is the way the university notifies its community members about closures, weather emergencies or other matters. If you're not sure you're receiving Boxer Alerts, check your notification details on the Boxer Alerts page.

Web of Support for Students

While Campus Public Safety may be thought of as the first line of defense for students, Pacific has a robust system of resources to respond to a variety of problems, from sexual harassment to suicidal impulses.

Just as with the spike in alcohol-related issues, the beginning of the school year tends to see the greatest number of sexual harassment and related issues, said Kathleen Converse, the director of the Center for Gender Equity and Advocacy Network.

She especially wants students to notice the gray button that’s at the bottom of every webpage on the pacificu.edu site. It says “Support at Pacific,” and when you click it, it takes you to a page deep in information and resources.

Do you have a concern about a student? Have you seen a bias incident? Have you or someone you know experienced any unwanted sexual contact? Are you suffering from emotional stress? Do you need short-term pastoral care? An immunization?

These questions and others have answers on the Support page. From acute, immediate needs to long-term support, members of the Pacific community can draw upon a range of resources.

You can also find links to report incidents, email the Title IX coordinator or request advocacy. Students can choose the way they raise issues for a response.

Of course, everyone at Pacific wants a safe and peaceful campus, where students are unfailingly respected and treated as young adults. But when problems happen, a web of people and systems are prepared to respond.