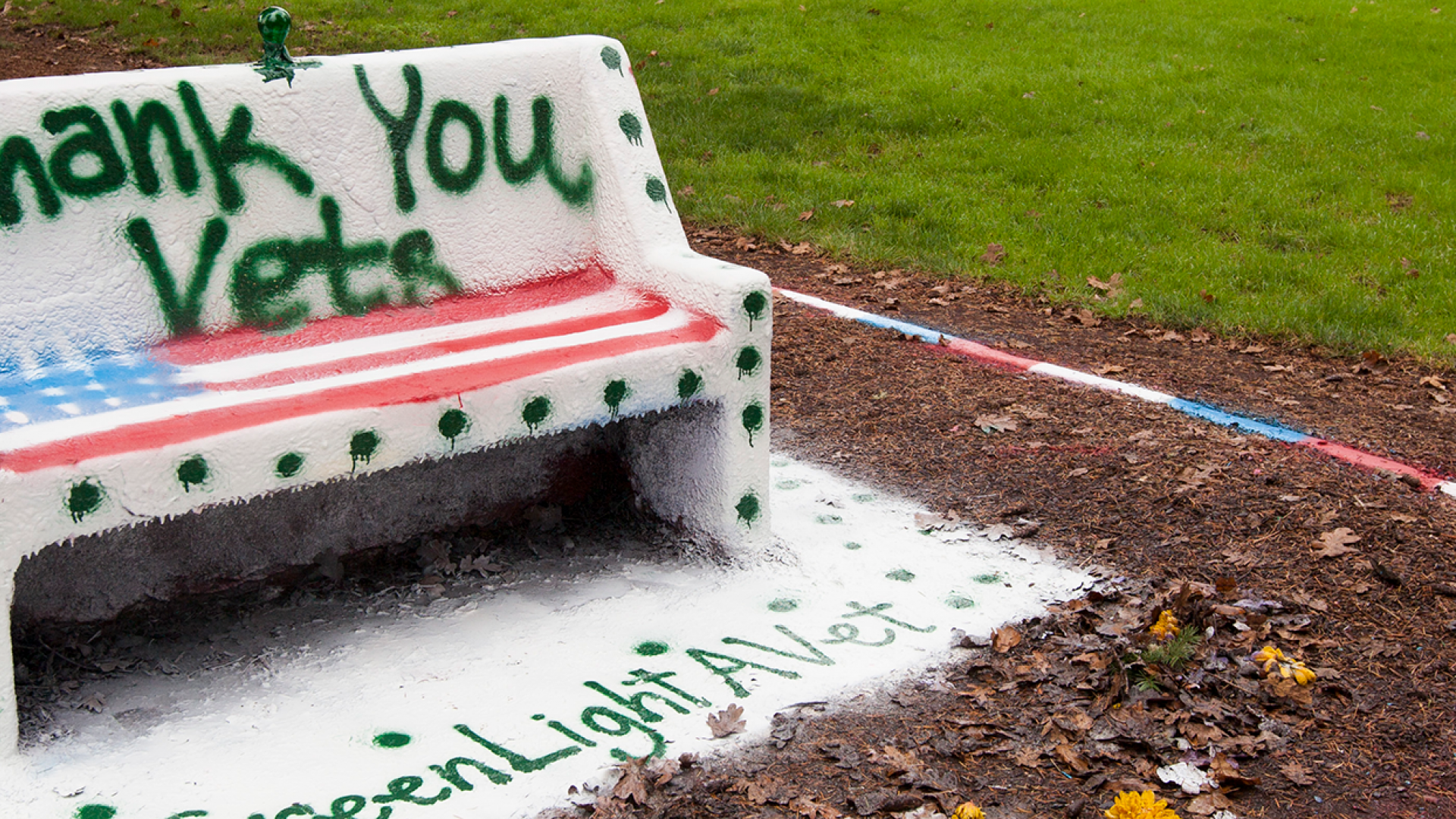 It’s not every day you see a student taping a green light bulb to the Spirit Bench, but on the afternoon of Nov. 9, a member of Alyson Burns-Glover’s first-year seminar class did just that.

The class painted the bench as part of a national campaign called “Greenlight a Vet.” The campaign aims to provide support and increase visibility of our veterans by encouraging people to display one green light as a symbol of appreciation. Participants are then encouraged to add the light to a national online map so veterans from across the states can see the support they have throughout the U.S.

For Morgan Masters, an education and learning major, the project was personal. Her dad was in the Navy and had been stationed in a variety of places. As her classmates spray-painted the bench white, she explained how she felt when she found out about the campaign.

“I thought the project was so cool," she said. "It brings awareness to all the vets out there that don’t get noticed enough.”

The first-year seminar students were inspired to take part in the campaign after watching the documentary War Ink in class. The film explores the storytelling role tattoos can play in the lives of veterans, and students wanted to take part in “Greenlight a Vet” to honor veterans and their stories.

Film and video major Fredrick Kernaghan has veterans in his family. Both his uncle and his grandfather were in the service, and his cousin recently joined the Marines. During his time in the service Kernaghan’s uncle started getting a tattoo in memory of two comrades who had fallen earlier that month. However, Kernaghan said, “It was never finished because they started getting bombed. It’s still unfinished today.” Kernagham also spoke fondly of his grandfather, a WWII Marine who used to tell him stories about the war when he was child. The "Greenlight a Vet" campaign was important to him as a way to express his gratitude for the sacrifices that all veterans have made.

Keegan Jones, an exercise science major with a veteran uncle and grandfather, took a short break from painting the spirit bench to speak about why he was passionate about thanking veterans.

“My family doing what they do is a big reason I can do what I do now … and the reason I can live safely over here," Jones said. "That’s a huge thing for me and I try to say thank you as much as I can.”

During WWII his grandfather was in the Navy and worked out on ships doing plane repairs. His uncle is currently in the Army and did a tour over in Iraq, which was understandably difficult on Jones. With only a seven-year age difference, “growing up he was basically like an older brother,” Jones said. It was tough on him not having his uncle around, and he missed him a lot. However, the two kept up a correspondence through letters, which helped Jones know his uncle was safe. Once, his uncle sent him a photo of himself in uniform. "I still keep that photo in my wallet today," he said. Jones added that he thinks it’s important that people express their appreciation for the risks veterans have taken. “Let them know that we don’t take what they do for us for granted.”

“Encourage vets and say thank you," Kernaghan added. "You never know how much a simple thank you can make a difference.”

Moments later, a woman veered off the sidewalk path to approach the students.

“I just wanted to say that with everything that is going on today, from one vet to you guys, this is so awesome," she said. "Thank you guys.”